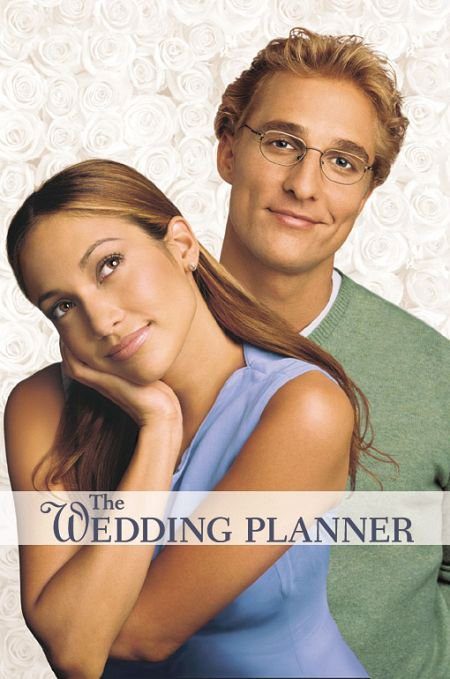 Jennifer Lopez has had her fair share of downfalls, including the legal proceedings surrounding her boyfriend, rap superstar Sean “Puffy” Combs. But  today she’s doing interviews to promote her new romantic comedy, The Wedding Planner.

Her publicist makes it very clear that questions about her personal life are out of the question.

So, about planning those weddings …

“I had always wanted to do a romantic comedy,” Lopez says. “When it finally happened, I thought it was kind of scary. I didn’t know if I was being funny. But dramas are heavy duty. Action pictures are physically taxing. Romantic comedies are fun. All you do is show up on the set and play — that’s what I wanted.”

She plays Mary, the sophisticated and conservative wedding coordinator who falls for the groom (Matthew McConaughey) of one of her clients (Bridgette Wilson-Sampras).

It sounds easy enough. But there was one point when that wasn’t the case.

Lopez can bust a move, but when it came to riding horses for the film, she was as clumsy as a rejected Fly Girl. Even after all the lessons she took for the filming, she doesn’t consider herself a rider.

“I grew up in the Bronx, and we hardly ever had horses,” she says. “Actually, we never had any horses. It was a new thing for me. I had been on a horse once, but it was an old, old one and it barely moved. This time it was really hard. The pointing of your feet and the way you have to keep your knees … I thought it would just be like ‘Giddyup!’ Luckily, they had a stunt woman for the hard parts.”

Lopez first heard of The Wedding Planner a few years ago when director Adam Shankman, a friend, approached her about it. Shankman says Lopez eagerly agreed to star for under a million dollars, which is a smokin’ deal in Hollywood. She was fresh off the reels of Out of Sight and was ready for something light and fun. However, Shankman had trouble persuading the studio that she has the comedic timing and star power.

“The studio made a big mistake,” he says. “They could have signed her a long time ago for much, much less. I told them ‘Look, her album is going to come out and she’s going to be huge! You’re going to be screwed!’ They didn’t listen to me and sure enough, they were screwed! On the 6 came out and it was a whole new world.”

Lopez doesn’t argue with that.

“The longer you wait, the more you’re going to pay!” she says, laughing and slapping her hand on the table Then the giggling stops and she switches to a serious, professional look.

“No, I’m only kidding,” she says. “I worked just as hard back then as I do now. Money has nothing to do with it. It never did for me. I was always motivated by wanting to be an actress, wanting to sing and wanting to grow as an artist. Those were always and still are my motivating factors.”

Like the savvy businesswoman she portrays on screen, Lopez has come up with her own plan for commercial success. Her new album, J. Lo, is being released to coincide with The Wedding Planner. The new disc contains five songs in Spanish and a mixture of pop tunes. She is excited about her summer tour. And her recent single, Love Don’t Cost a Thing, appears in her new movie.

This March, she begins production on the film Enough. Lopez says it is about a subject that is very important to her: domestic abuse.

“It’s a story that all women can relate to,” she says. “It deals with women who have to deal with physical abuse or, on a smaller level, emotional abuse or just a bad situation. We end up turning ourselves over because we love someone and we end up losing ourselves. This story is about saying ‘Enough’ and taking control of your life.”

After Enough, she will be tackling a Latino icon, Frida Kahlo. Lopez will star as the tormented painter in The Two Fridas. The subject is already stirring up controversy because Salma Hayek is working on a similar project.

“I’m known for doing risky things,” Lopez says. “Many people considered my making an album being risky. I just go with my gut feeling. I don’t have any regrets from anything I’ve done. I think when you go against your gut, that’s wrong.

“My instincts have guided me this far with God up above. It’s all a big universal process.”