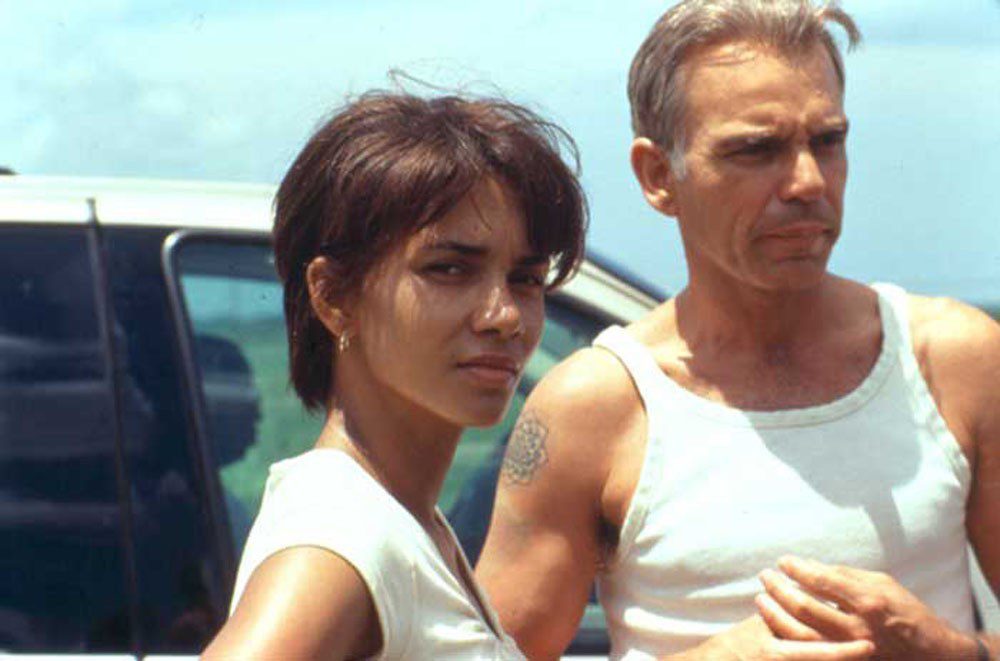 NOTE: Before blogging, I used to be an entertainment reporter for a daily newspaper, where I interviewed dozens of actors. Enjoy this article “from the vault!”
By Kathy Cano-Murillo
The Arizona Republic
Feb. 7, 2002

It seems that every time Halle Berry appears on-screen, she generates headlines. Three months before X-Men debuted in 2000, she was involved in a hit-and-run accident. When Swordfish was unleashed last year, Berry unleashed her …

OK, we don’t have to go there. But Berry’s latest film, Monster’s Ball, is no exception. Except with this film, which opens Friday in the Valley, the news is far from scandalous. Within a month of its initial, limited release late last year, the 33-year-old actress scored a handful of award nominations. She has earned a newfound respect, and maybe even an Oscar nod, with her turn as a condemned killer’s widow who falls for the death-row warden (Billy Bob Thornton) who helped execute him.

We got Berry on the phone to talk about Monster’s Ball, as well as a few other personal subjects.

QUESTION: What did Monster’s Ball do for you?

ANSWER: It brought me a real sense of accomplishment. It was very gritty, edgy, uncompromising and uncomfortable. I’m proud that no one wavered, andstuck to the true story. That is something that I’ll take with me on my next film, and in my life. To believe in something and go with it.

Q: There are some very raw scenes. Were they difficult to film?

A: There were only a few scenes that were hard. We improvised on them. I had to make them a little more personal. It was hard enough to play drunk; I was like, “How does one do that?” I tried to use something that meant something to me or that triggered (something) in my mind from my childhood.

Q: Did you and Billy talk about your sex scene beforehand?

A: No, we sure didn’t. It was one of the last things we shot. We always knew it was in there. We both knew we were married, we both knew what we were doing and that it was very unnatural. But we are professionals, and we know it is a part of moviemaking. We are both so much in love with other people, and that made it easier.

Q: Do you and your husband (Eric Benet) ever plan on working together?

A: Oh, God, no. Never! (Giggles.) I’m not a big fan of when I see real married couples in movies together. I can never get past the fact that they are really married. That bugs me or distracts me.

Q: You’ve gone to great lengths for your acting. Is it true that for Jungle Fever you didn’t shower for weeks so you could get into your character?

A: Ha! Luckily I’ve grown so much since then. Now I realize that you don’t have to torture yourself like that to act. It should be fun and be cathartic. I don’t try to torture myself unless I absolutely have to.

Q: You’ve been on a media roller-coaster ride for a while. Honestly, do you ever have a Ben & Jerry’s moment where you just want to dive into a carton of ice cream and forget about everything?

A: I sure do! Mine is comfort food. Like all the things that I can’t eat daily. When I’m feeling sorry for myself, I just want to come home and eat hot dogs, pizzas, cheese bread, chocolate milkshakes … (giggles) everything that will rip my stomach apart. I’ll just binge on everything in my house.

A: You gotta do it. You gotta live. If you are disappointed, you have to “be there” and do that kind of stuff to work through it so that, the next day, you won’t still be carrying it around.

Q: What’s coming up next?

A: I get to go do a James Bond movie and then X-Men after that. For Monster’s Ball, I had to lose a lot of weight and got really skinny. Now I’m learning combat training and martial arts. That’s the rewards of acting. One moment you get to do a character who is dealing with one set of issues, then you get to go play someone that is a polar opposite.

Q: What is the biggest misconception about you?

A: While I was being interviewed at the Golden Globes, someone said, “You know, people see you as a cream puff.” I just hope people realize that I’m not really a cream puff. There is a little more substance to me than I get credit for. And I hope, as I continue to grow, that will become more apparent.