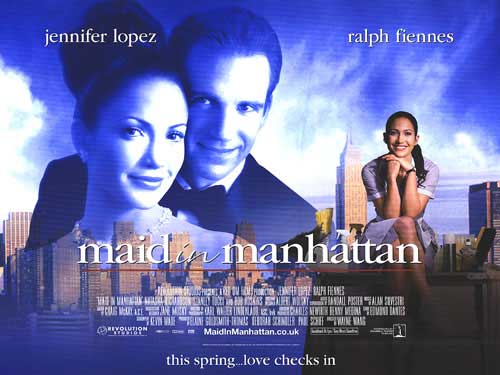 NOTE: Before blogging, I used to be an entertainment reporter for a daily newspaper, where I interviewed dozens of actors. Enjoy this article “from the vault!”
Kathy Cano-Murillo
The Arizona Republic
December 12, 2002

There are some things that are completely unbelievable; Jennifer Lopez as a cleaning lady is one of them. But that might change once her new film, Maid in Manhattan, is released Friday. She plays Marisa Ventura, a single mom from the Bronx who works as a maid in a five-star Manhattan hotel. Her life takes a spin when she pretends to be a wealthy socialite to capture the affections of a high-profile politician (Ralph Fiennes).

During a recent interview at New York’s Waldorf-Astoria hotel (where the movie was filmed), Lopez admits the role hit close to home.

QUESTION: How did you research; did you wear an apron and actually dust and clean?

ANSWER: Well, I’ve lived in hotels my whole adult life it feels like, but also, they showed us these tapes on how to do everything properly. Like how to make the bed exactly, hang the towels exactly, open the curtains exactly, so we all really got into those tapes. I’m a very clean person; I think that’s why it was fun for me. I could learn how to get those bed corners in the right way.

Q: People are saying this is a semi-autobiographical project for you.

A: Oh please, that’s so funny. My favorite line in the movie is when I say to Ralph, “I don’t know how you do it, all those cameras in your face all the time!” Did I laugh? Hell yeah! I thought that was hysterical. But really, going back to the Bronx made me realize how far away from this character I’m not. I grew up there for 20 years, two-thirds of my life. I just realized this is the street that I used to walk, I went up these stairs and got on this train. No matter where I’m at or where I live right now, this is who I am. This is what I’ll always be. It’s a good feeling, I felt like I was coming home.

Q: In the film, you have a mean-spirited mother. How was your mom in real life when it came to supporting your career?

A: You have to realize my parents had a ’50s and ’60s upbringing. They were from another country (Puerto Rico) and had a different mentality. It was like, “We’re good here and safe. We’re eating every day, don’t push it.” There was a fear of success because of a fear of failure. Which is why me doing what I wanted to do was such a strange thing for them to understand. I think even the world at large thinks it’s strange for me. They say, “How did this girl from there get to here? How did that happen?”

Q: Your character gets busted trying on a hotel guest’s clothes. Have you ever caught someone modeling your designer threads?

A: All the time! Especially the hair and makeup people and my assistants. They like to put on my long hairpieces. Or they’ll put one of my short skirts or a halter dress and my high heels and start singing my songs to me.

Q: How are you and Ben Affleck handling the pressure of the media these days?

A: We read the tabloids together, point and say, “Hey, that’s not true,” or “No way, it didn’t happen like that!” Since I’ve been lucky enough to have worked as long as I have, I learned how to deal with it. Now it’s like, whatever, it’s all a part of it. If you aren’t doing anything wrong and have nothing to hide, it’s fine.

Q: When did you know Ben was Mr. Right?

A: I can’t pinpoint that to a certain day or time. He really didn’t do anything wrong, maybe that was it.

Q: You have two movies coming up soon in which you co-star with him. Do you think your romance will affect the reception of the films?

A: As long as the movies are good, people will like them. If they don’t, we’ll take the brunt of that because the next time when we do a movie together and it’s good, they’ll forget about it. It’s all about quality. Actually, we want to do everything together at this point! But I don’t know how many people will invest in that. (Laughs.)

Q: Are you still planning on touring for your new album or would you rather slow down?

A: I’m at the point where I can take a little more time between things. But then I can’t say because I have such a passion for my work. I did (sigh) commit to a tour and we are trying to make it work for next year. We’ll definitely do a TV special either way. But going on the road is another thing. It’s a long commitment. Movies are only three months, a tour is a year-and-half commitment. I don’t know at this point if that is something I want to do.