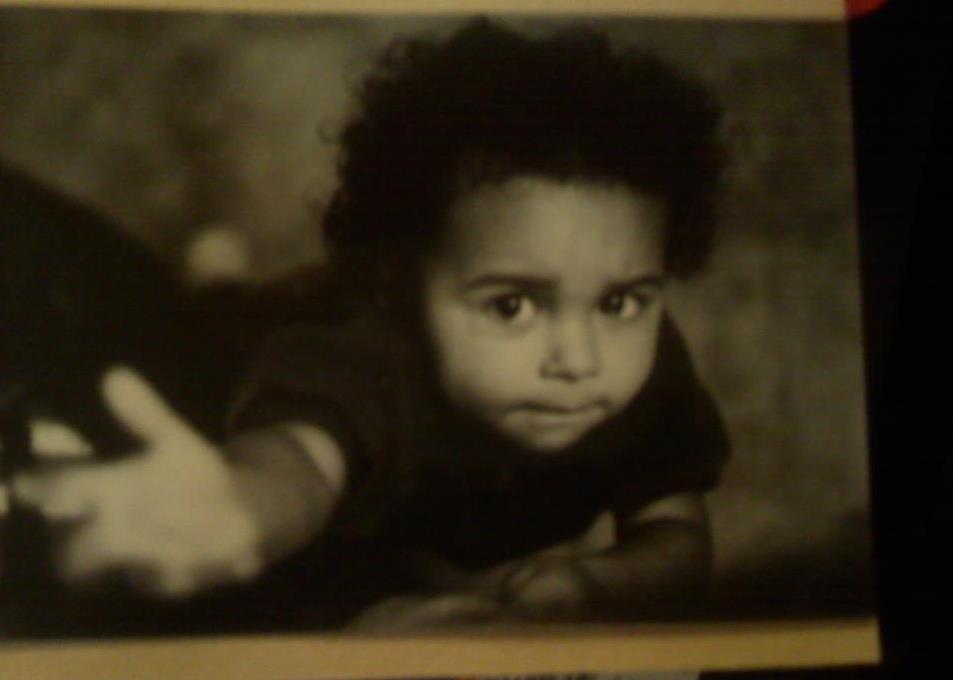 We named our son DeAngelo, the angel

We named our son DeAngelo, he is our first born of two kids. When I found out I was pregnant with him, I was so excited that I wanted a special way to tell Patrick. But not use boring words! Instead, I drew a picture of a baby and wrote in big letters:
“Guess what cuz? We’re having a baby!”

I posted it on the back of the bedroom door. He walked in the room to get something, gave me a smooch and then walked out and closed the door.

One second later, the door slowly creaked open, and he peeked his head through the crack…

“Did that sign say what I think it did?,” he asked.

Now to choose a name

We had the name DeAngelo picked out in case we had a boy because in Spanish it means “of the angels” – although everyone we told thought we were fans of the Teenage Mutant Ninja Turtles, who were all the rage at the time.

The pregnancy had its difficulties. At eight months, I was driving in my car in the fast lane on the freeway, listening to Elvis Costello and was headed over to my cousin Ronnie’s house. My tire blew out and I slammed on the brakes. The car hit the median and flipped completely over until it was upside down. It seemed like it was slow motion as it turned on each side.

When it finally stopped moving, the top of the car was touching the ground and I was sitting on the roof from the inside.

I remember thinking how I knew things were too good to be true and now the bad things were happening. All I could think of was my unborn baby and how I may never get to know it or hold him.

When the car stopped, I immediately looked for my limbs. Intact. Thank God. Then I glanced around, realizing the car was now upside and I was inside. I didn’t have on a seat belt and somehow my body glided around until I was sitting on the interior roof. I heard people yelling, asking if I was okay. And then I heard fire engine sirens. It all happened so fast!

I don’t remember anything else except that a fireman popped his head in the window and asked me if I was OK.

“I think so, but…I’m eight months pregnant,” I replied. I heard him holler to his partners. They carefully removed me from the car, put me on a stretcher and rushed me to the hospital.

I recouped OK, but…

Two weeks later I found myself in the hospital, facing an emergency C-section. It was the most awful experience of my life. There was no warning, I couldn’t prepare mentally. One second I’m in the hospital room and the next there was a team of nurses ripping off my gown and sticking needles in me. My blood pressure went so high I was about to have a seizure, the only way to stop it was to get the baby out.

They numbed me from the waist down and I sobbed the whole time. Patrick stayed by my side and witnessed the entire surgery. He said when DeAngelo came out, Patrick put his finger out and DeAngelo grabbed it tight.

Both me and DeAngelo made it through, exhausted but OK. He was only four pounds. We had to feed him every hour because his tummy was so tiny.

Those two experiences really bonded us in a wonderful mother/son sort of way.

We’ve always been super close, he tells me everything and love to offer hugs and kisses. One time when he was in third grade, we were at the grocery store. He was about as tall as my chest. He cheered, “I love you, Mommy!” and he kissed each of my chi-chis! Like, one-two kiss-kiss! I said, “DeAngelo!” LOL!  Ok, that’s a little too much affection! Now he cringes when I remind him of that!

Things are so different now. My little DeAngelo is 13. Girls are writing him notes, his friends call him on the phone all night and he loves to chat on the anime message boards. The down side he is having trouble with some of his grades in school. Of all the classes, it’s Language Arts and Reading!

It’s not that he isn’t getting “it”, it is that he doesn’t turn in all his homework. Instead of breaking a sweat and putting in the time, he tells us he is all done. I’m worried because in 8th grade there is no room to slide. High school is going to be even harder.

Other than struggling with so much homework, he is such a great kid. He does all his chores, is very respectful and helps us. But that doesn’t help his report card.

Patrick and I do the good cop/bad cop thing with him and it works for a while, but lately he is slipping back in lazy mode. Tonight I felt so mad, I told him he is not allowed to
close his bedroom door anymore. It’s Friday night and he stayed up for hours working on school work, trying to catch up before Monday. I was so happy to see that and thought things were getting back on track.

But something strange happened. For the first time EVER, he went to bed without saying goodnight and giving me a kiss. I went and checked on him and he is asleep in bed with the door open. Did he forget, or is he mad at me?

I know we’ll get through the grades OK. But what worries me is that the older he gets the more he will grow apart from me.

Being a parent has so many challenges – the laundry, running errands, cleaning and helping with homework are the super easy parts. The hardest aspect is riding the wave of trying to figure out what he is thinking or what he thinks of me.

I used to tell him that I could put my hand on his shoulder and read his mind because we shared the same body for nine months. I used to have him convinced that I would get psychic visions when he was about to do something bad. That made him tell me everything!

Now he is old enough to know that mommy’s powers aren’t all they are cracked up to be. And to me, that is scarier than any car crash or emergency surgery…