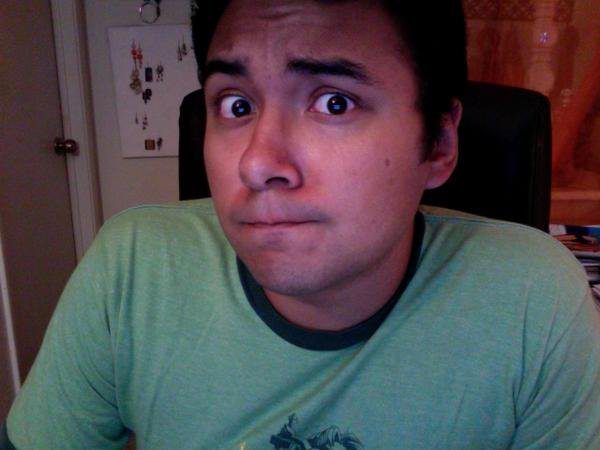 Being a mom, there are only a few totally *precious* moments in your kid’s life. You know – like taking that first step, losing the first tooth, graduating from kindergarten, shaving the upper lip…

Well, if you have a boy that is.

DeAngelo is 13 and has been growing major peach fuzz on his chin and above his lip. I’m talking Wolf Boy. My mom and Patrick’s mom always ask me when I am going to shave it. Where is this in the child rearing manual? Is there a general guideline somewhere as to when the time is right to shave the fuzz? Once you shave it, won’t it grow back even thicker and make him look older and more desirable to precocious hussy girls?

I knew the time was getting close for DeAngelo’s conference with the silver blade. At first I thought it was a male-bonding experience that Patrick should share with him, but Patrick doesn’t want him to shave it just yet. I think it’s a guy thing to be hairy for as long as you can???

So tonight DeAngelo and I went to Target for fresh school supplies and we made our way to the grooming aisle. I told him it was *time*. He almost looked like he didn’t believe me because it just came out of the clear blue sky. But that is how mommy’s mind works sometimes, so deal with it already.

I picked up a package of Lady Bics (I was too frightened to use the Schick Quattro that Colby Donaldson pushes – it’s very intimidating for a first timer!) and a can of shaving gel.

I got home and talked to my dad on the phone for some coaching.

“Just soften up his skin with the shaving cream and keep running the shaver over it in short stokes until all the hair is gone,” he said. “Isn’t Patrick there?”

I don’t need Patrick to shave our son’s mustache and fuzzy beard! I was 85% confident I could handle it. Maya was at my sister-in-laws and Patrick was at a friends. DeAngelo and I were ready to have a fun Friday night in the bathroom.

I had him sit up on the bathroom counter and I foamed him up. “Are you sure you know what you are doing, Mommy?” he asked in an unsure tone. “Of course!,” I replied. “Well, I think so.”

I got busy and it was actually a lot harder than I thought. Even though I was using a Lady Bic with a special moisterizing strip and a safety guard, I was in fear of being the wacko mommy that ripped her little boy’s face flesh apart. I see it now – someday his kids will be looking at his wedding pictures:

Kids: Daddy where did you get that big ugly scar across your upper lip and where is it now?

DeAngelo: Well, your Grandma got a wild hair one Friday night when I was 13 years old and she gave me my first shave with a mean Lady Bic razor. She gashed my skin. Daddy eventually had to get plastic surgery.

Ew. I couldn’t let THAT happen. So I ever so carefully applied my short and swift strokes on his face and stopped everywhere that it got too close to danger – close to his nostrils and right at the edge of his lip. I looked through the remaining film of foam on his face and it appeared that I got everything. I told him to rinse. He did so, lifted his face, dried it and showed me.

I took one look and left the room to go get my camera. On the way there I couldn’t help but laugh.

Poor DeAngelo had a fine line of a mushtache running along the tippy top of his lip. He looked like Little Richard, sans the eyeliner. He had two little bushels of hair right below each nostril and a thick strip going straight down the middle of his upper lip. There were little hanging threads of hair on his chin.

It was real bad whack job. I think Otis the drunk could have left a more professional finish.

I just had to get a picture for my scrapbook!

After I had him pose for my future blackmail snapshots, I foamed up his mug once more. I went in for a second time, this time with delicate precision, and got most of the hair that was left. I couldn’t get that little patch right in the middle of his upper lip. There was that little dent and all, and I didn’t want to cut him! So I stopped. He still has a few little patches that Patrick will have to clean up when he gets home. But basically I did it all on my own! (High five please)

I do realize that it will all grow back quickly and little DeAngelo will probably look like Burt Reynolds by this time next week, but at least I can say I was the one who gave him his first shave.