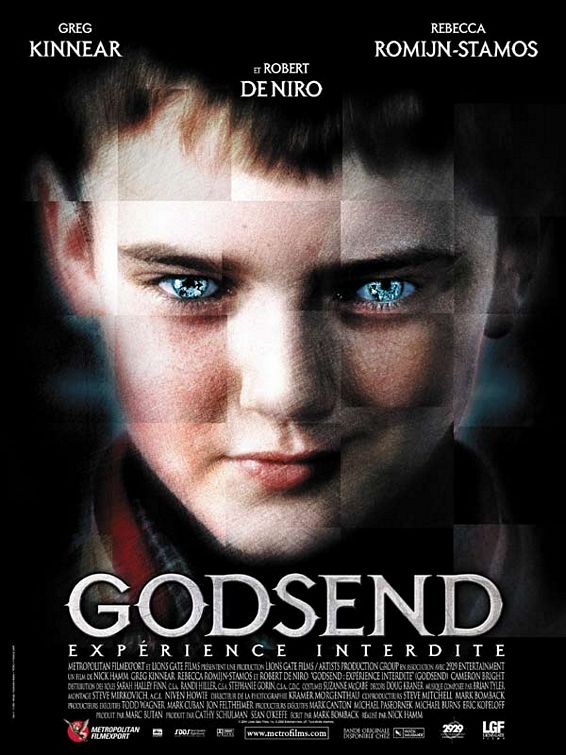 Tomorrow I have to see a screening of Godsend for work because I have a phone interview with one of the actors. The problem is, I’m a big chicken!

This phobia goes way back.

When we were little (I was 10), my nana took all of us grandkids to see The Omen (RATED R!) so we would recognize that the devil is alive and well and we should be good, obidient children to avoid his wrath. That certainly left a mark on my mind because I had never seen anything so graphic before. Imagine going from The Sound of Music and Chitty Chitty Bang Bang to a raven-haired spooky lady throwing herself out of a window at a kid’s birthday party. And Satanic drool-dripping rott-wielers. And a priest getting struck by lighting or a man getting cut in half by two train cars for that matter. See what I mean? That stuff stays with you. Thanks Nana!

When I was a senior in high school, I went with my petite friend Dana to see Poltergeist. Imagine her fury when I began to cry and made her leave the theatre with me – right at the climax! That big tree coming in through the window, the clown that came to life, the ghost floating down the stairs. It was too much for my shaky nerves and I had to bolt. Dana escorted me out and vowed never to go with me to a nail-biter feature again.

And to date I have never made it through The Amityville Horror (or any of its sequels) – even when it is showing on TNT loaded with Schick Quattro commericals.

There are several movies that I had to see twice because of my soft spine. Once with my eyes closed, and again squinting through my fingers: The Sixth Sense, Blair Witch Project and What Lies Beneath. To this day I’m still convinced that there is a dead girl sitting on my bathtub’s ledge thanks to Stir of Echoes.

Then there are those movies that *really* messed me up bad. The Others was one of them. I begged my sister Theresa to pleeeaaase go with me. And then 15 minutes into the film, I got so scared that I, um, made her leave with me. She made me pay her $8 for a refund and swore she would never accompany me to a thriller again. On the way home, I called a friend of mine who had already seen it and had her explain the whole movie to me. I wanted to turn the car around and go back for the next show, but Theresa wouldn’t have any part of it. I eventually got another friend to go another time. Even though I knew the play-by-play, I still had to shut my eyes.

The other biggie was The Ring. I had no idea it was a ghost story until I got to the screening and I HAD to watch it for an interview with Naomi Watts. I couldn’t sleep for weeks after that movie, but the interview was worth the trauma. I had closed my eyes during all the graphic scenes so that gave permission to my imagination to work overtime. Every night when I was lying in bed with the lights off, I could swear I saw the shadow of Samara standing over my bed ready to grab my soft, chubby arm. I finally saw The Ring again via DVD, with the lights on and I looked at the so-called scary scenes to find they were very cheesy. Now Dreamworks is coming out with The Ring 2. For some unexplainable disturbingly amusing reason, I can hardly wait to see it!!!

Godsend is about a couple that loses a son and they have a clone made from his DNA, but the kid comes back evil. I hate seeing creepy movies about wicked children. OK, now I really have to shake this vibe so I can get some rest. At least I can take comfort in knowing Patrick will be going with me to explain the parts I missed due to my hands being over my face.

On a lighter note, I’m making domino necklaces this week!

What movies freaked you out in your lifetime?