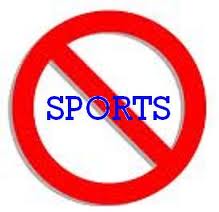 Maya has her first softball game next week and I’m thrilled! Which is weird because I’m not a big sports person at all. I HATE sports.

I used to play softball all through grade school and was pretty dang good at it (slow at running but I could really clobber the ball far enough to make it safely to second base). After 8th grade I got into punk rock, arguing with my parents, writing in my journal and that was it. I became allergic to sports from that point on.

Anything dealing with an athletic uniform, a ball or sweat just gave me the creeps. I don’t know any sports people’s names, I make sure my fingers never touch the sports section in the paper and I asked for our cable company to please block any stations that have sports stuff 24/7. I can’t even watch sports movies without feeling pain in my nerves. When I was single, my only requirement for a husband was that he not smoke or be into sports. Three years into my marriage to Patrick, I came home from a tiring shopping session and there he was – *gulp* – sitting on the couch watching a football game! I wanted to cry! I thought it was the beginning of the end of our beautiful matrimony. Before I could make a scene, he told me not to worry, it was just the Super Bowl and it was normal to watch. Whew! That was a close one!

A few years back, the Arizona Diamondbacks baseball team was launched in our town. As an assignment, me and this other features reporter were sent to get quotes from the players about their favorite local restauants and places to hang out for our entertainment guide. The pr people sent me in the locker room to do my interviews. I took two steps in and freaked! There were all these hunky guys stripped down to their Fruit of the Looms. Ok, I didn’t see all of them, I just caught a glimpse of one of them and I turned into a female Jerry Lewis. No words could come out of my mouth inthe correct order. I mumbled and then turned around and split. I shuttered at the thought of seeing scantily clad men in person right in front of my nose (I’m shy). I immediately left and went to the dugout for sanctuary. The PR lady told me that was fine, just to grab the players as they walk out and onto the field.

There was one rule.

“Don’t bother Randy Johnson!”, she said. “He is the pitcher and he needs to concentrate on the game, so don’t even look at him please.”

I had no idea who Randy was or what he looked like. To me, all the players looked the same because they all had their hats so low on their face. The first guy walked out and I cheerfully ran over to him. I told him I was from the paper and if he wouldn’t mind sharing his favorite pizza joint. He told me he wasn’t interested in talking. How rude!

“KATH-eee!!”, the lady shouted. “I told you, you can talk to anyone but Randy Johnson! And you just ran up to him and talked to him!”

Yikes! Sorry! Within the minutes that followed, I did manage to get quotes from other players. And my male co-worker managed to interview a few guys in the scary locker room. We finished up, shared notes and then began to exit the field. Or so we thought. We were comparing quotes while walking when we heard mad people yelling. We looked over our shoulder and the baseball players were screaming:

“GET OFF THE FIELD!”

Whoops again! We had missed the exit and we were right smack in right field while they were practicing.

Another sports horror story was when I accidently bumped over this guys baseball collection with my butt when I bent over to pick something off the floor. Talk about wanting to DIE at that very moment!

That’s all in the past now. These days, I’m turning over a new leaf. I swore I would never put my kids in sports, because I’ve seen too many parents on TV, throwing blows with eachother and I’ve read about kids who get thei rnecks broken in sports. I wanted to protect my lovely offspring. Plus I couldn’t imagine sitting on those uncomfortable steel bleachers!

But after seeing little Maya try out for basketball year after year and not get on the team, I thought maybe she could pick up where her mom and dad left off and hit a few balls. She joined The Cubs and has been playing for three weeks. She LOVES it. The whole family goes to all her practices to cheer her on. Tonight she had to learn how to slide into the bases. I was chewing my nails it was so scary yet exciting! But she did it. And I give her credit for starting brand new as a beginner with all new girls to meet.

The most surprising aspect is that I LOVE it too. I actually think I want to go to a Diamondbacks game! And now that I know who Randy Johnson is, I’ll make sure not to break his concentration.