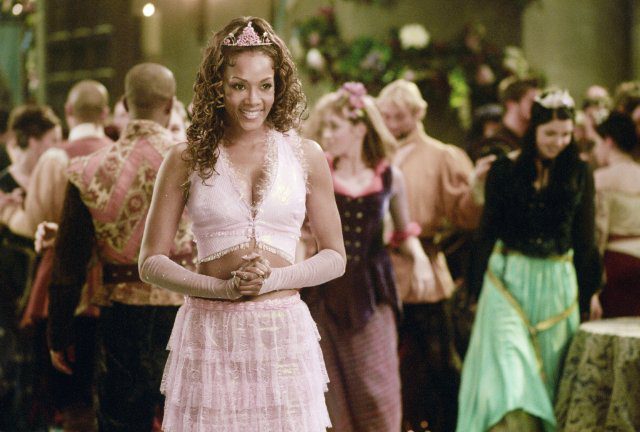 “From the vault” of my former entertainment reporting newspaper days!
By Kathy Cano-Murillo
The Arizona Republic
April 8, 2004

YOU KNOW HER FROM: Independence Day, Soul Food and Kill Bill, Vol. 1.

TRADEMARK FEATURES: Tall, talented and gorgeous. She sports a fox tattoo on her arm.

WHAT SHE IS HYPING: Ella Enchanted, opening Friday. She plays Lucinda, a ditzy fairy godmother who gives the gift of obedience to her goddaughter, Ella (Anne Hathaway). The gift backfires when Ella’s evil stepsister uses it to her advantage.

DID YOU KNOW? Fox, 39, just signed on to produce and star in the Lifetime Channel’s series 1-800-Missing. She has two more films coming out this year, Blast! and Getting Played.

LOVE LIFE: Until recently, she was seeing rapper 50 Cent.

QUESTION: What inspired you to play a fairy godmother?

ANSWER: Miramax approached me. I was doing Kill Bill, and I think they figured they had tortured me so much — I mean, I was walking around looking like a Black Carrie with all that blood on my face — they thought I would like this and offered it. They asked, “Do you want to go to Ireland to play a fairy? It is pretty and pink, there is cleavage and you’ll look gorgeous!” I was like, “And it’s magical, too? All right!” It was a great change for me.

Q: If you were to run an ad asking for a fairy godmother, what would it say?

A: Wanted: Single Black female searching for a fairy to deliver wisdom and happiness.

Q: In the film, your goddaughter insults you by wanting to return your gift. What kind of gifts have you received that you wanted to give back?

It had those different things with it. What do you call them? Attachments? It was from a sex store. I saw it and I thought it was a massager or something. I was like, “Um, I don’t want this!” (Laughs.)

Q: Kill Bill Vol. 1 comes out on DVD this week. How did that film change your life?

A: Oh, my God — working with the best brings the best opportunities, because it’s guaranteed that people will go see the movie. (Quentin) Tarantino has such a humongous following, Uma (Thurman) does, too. Everyone wants to go see them. It helped me so much being a part of it.

Q: Have you been keeping up on those martial-arts skills? If you had to beat someone up right now, could you?

A: If there was a paycheck involved, I could definitely kick some ass. But I try not to fight anymore. I do keep up the Billy Blanks’ Tae Bo (workout) five times a week because my body responds so well to it.

Q: I remember watching you on The Young and the Restless back in the day. What was life like then?

A: I used to wait on tables all the time and audition for everything. Even when I landed the job on The Young and the Restless, it was a huge soap opera and all, but I only worked one or two days a week. So I still had to wait tables during that time. I was working hard for tips, I was still hustling like crazy.

Q: Being a sexy Hollywood starlet, what is the most romantic thing a man has ever done for you?

A: 50 Cent did something unbelievable for me. When we went to the Video Music Awards, we stayed at the Four Seasons in New York. When I opened the door to our room, there was a river of rose petals, chocolate-covered strawberries, champagne and dozens and dozens of roses all over the room — by the window, on the bed, in the bathtub. It was, honestly, the most romantic thing a man has ever done for me. It made me cry.