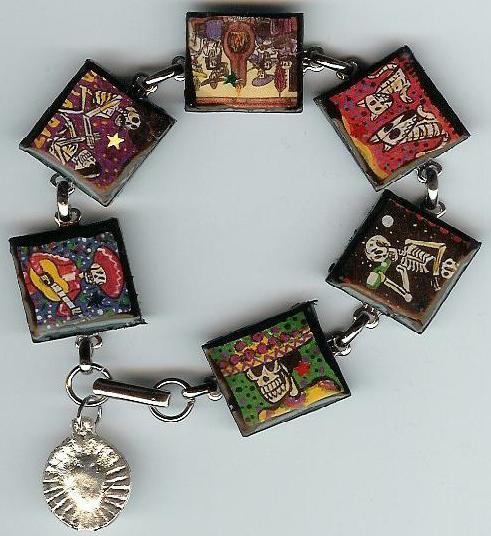 For the past two years I’ve painted and sold skull lights for Day of the Dead. They were such a hit, but this year it looked as though I couldn’t get them in. Lo and behold at the 11th hour, I got them this weekend. I only have about two dozen sets so I’m thinking of just selling them on eBay. I put them up for sale yesterday and today I came home to seven orders! So I prepped the art table, pushed up my sleeves and went to work making these instead:

I’m such a bad girl. Why is it I want to do everything I’m not supposed to? I think I just needed to get this last bit of self-expression out of my system before chaining my spirit to all this Dia de los Muertos stuff.

And since we are on that topic, weird stuff has happened lately. First of all, it looks like the production company from the show I taped last month has lost one of my supply boxes I had shipped over there. It was all my Day of the Dead stuff – white chocolate sugar skull supplies, edible Aztec gold glitter, etc.! I’m so crushed and am still lighting a candle that it comes back to me. I made some really cheery fabric collages that were in that box. Now I’m wishing I had packed them in my suitcase. Live and learn. Deep breath…

Next weird thing. I’m posting stuff on eBay this weekend and see some of Patrick’s paintings shrunk down to itty bitty sized pictures and being sold on a bracelet by an artist in England. We emailed her and learn that there is a company out there who has taken our images from dead.azcentral.com, as well as some other artists skeleton paintings and combined them on a clip art disc and sold them! Luckily the girl from the auction was very sweet and said she had shredded the disc. And it looks like the company is out of business. But it kinda freaks me out that there are disc floating around out there with Patrick’s art.

Alrighty mateys, this one doesn’t have anything to do with skulls but it just irked me today so I’m venting. I’m at a pseudo hippy-friendly coffeehouse and comment on a movie star. OK, it was Elijah Wood at the Willow House. I asked if they were going to do anything special with the chair he sat in, or the spot where he drank his coffee. There are ways to be creative without hanging up a red velevet rope with a gold-framed portrait of the guy. I mean, jeez, even for the sake of kitsch, a Frodo picture or something goofy just to point out where he sat and drank his coffee. A hook. A conversation starter. A bit of useless trivia for the coffeehouse.

The kids behind the counter were appalled at my idea, rolled their eyes and whined back in a deadpan nasally tone:

“Oh – no, no, no. That would be very ANTI-Willow House. We could care less about any celebrities…We would never do something like that. We don’t really care.” (Enter demeaning snicker here)

They both went on and on about my dumb superficial idea. I’m thinking, “OK this is a business right? Hello? Ever heard of marketing?”

I mean it’s not like it was Britney, Ashlee or Chad Michael Murray. Elijah is cool people and his movies are very Willow House, I think. Elijah said he loved the Willow House and Willow House patrons even waited to get his autograph. But what the coffee clerks said didn’t make my eyelid twitch. It was the fact that here they are trying so hard to be earthy, non-conformist and anti-establishment, but little do they realize that they sound even MORE snotty and picky than the manicured concierge dude at the Beverly Hills Four Seasons. It bums me out because I’ve been going to the Willow House ever since it opened 10 years ago and the staff has never been snooty like that. It used to have a “one love” kinda vibe.

Eeek, I must stop with the negative energy and move on!!!!

Now about those two pages. It’s for a new book and I have to finish the two-page outline tonight. I have one fun, fun, fun topic and two ideas of how to package it. I wonder if it would be unprofessional to present both ideas? I’m not sure which I like better. My gut wants both of them. I don’t want to jinx myself and go into too much detail here. I did that with my last proposal, and that has been sent back to the drawing board! Just wish me luck, kay?

Adios for now! And dont’ forget – movie star or not – everyone deserves the One Love treatment!!!