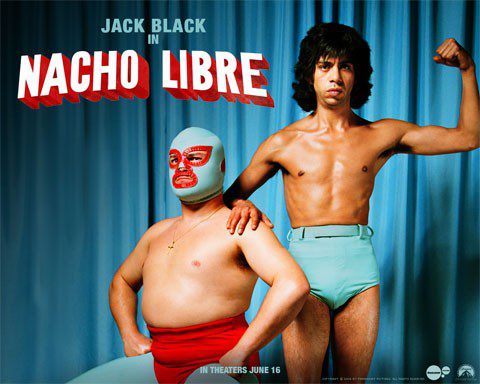 OK, so most of the critics pretty much hated the Nacho Libre movie. I listened to them and avoided the flick for a week. But the kids nagged and we saw the movie this weekend.

It’s kinda like School of Rock-meets-Napoleon Dynamite with a dash of Robert Rodriguez. The plot was thinner than Jack Black’s weight-loss journal, but the gags were silly and wickedly clever. Swear to God, my abs ached from giggle overload and I will be seeing it again, pre-DVD.

It was a cute movie to take the kids to and as a bonus, also had a basketful of craftiness! You don’t think that fancy pom-pom fringe cape just showed up on Nacho’s doorstep, do you? Like most other newfound superheroes, he constructed it himself, which we get to see. In addition, there is so much great imagery like gold lame wrestling masks, lucha libre poster art, tapestry suits, glittery shrines, statues of saints, and even salad art that you will want to recreate at home. Actually, I think I’m up for making a sparkly cape from a tablecloth. And I’ll spell out C-R-A-F-T-Y C-H-I-C-A by sewing on rosary beads, and then wear it when I’m at the art table. Just a thought…

I must admit, I almost felt embarrassed for posting this because earlier today I read Alisa’s post on her favorite weekend movie. It was much more meaningful than mine. It was Al Gore’s An Inconvenient Truth. That blog post compelled me to want to see the film a.s.a.p., and take the kids with me. That’s why I love reading Alisa’s blog. It is always filled with nutritious nuggets of info I may have otherwise missed.

So maybe you can consider An Inconvenient Truth as your meat and potatoes film and then follow it up with a sweet and crunchy helping of Nacho.