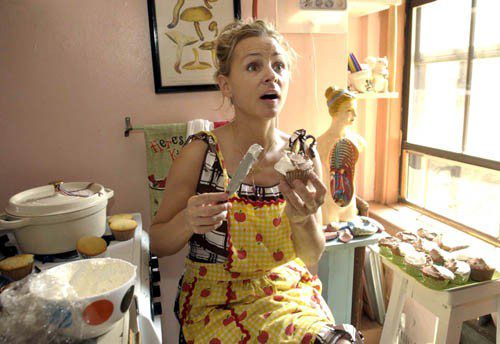 You know her from: The TV series Strangers With Candy, Just Shoot Me, Sex and the City, and Monk. She appeared in supporting roles in the films Maid in Manhattan, Elf, The School of Rock, Bewitched and Chicken Little.

What she’s hyping: Strangers With Candy (opens Friday). The movie serves as a prequel to the television series. Sedaris plays Jerri Blank, a middle-age, bisexual ex-con who returns to her high school to try to redo her high school years.

Bonus: Sedaris describes her character as a hybrid of chipmunk and pro golfer.

Do you think the mainstream is ready for Jerri Blank?

I have no idea. I guess we’ll find out. But I can say that we were very faithful to the TV show because of the fan base. Without the fans, (Strangers With Candy) would be nothing, because Comedy Central certainly never promoted it. We don’t want to piss those fans off, so we’re trying keeping things the same, but still open it up to get a bigger audience.

What makeup tips did you learn playing Jerri?

I’m not good with makeup, I don’t understand the colors. When people say, “Oh, I love the blue in that red,” I’m like, “What?” I just put on mascara, some pencil and throw on some blush. I’m just horrible with makeup. But I do know I like to do my own. Every time someone else puts it on me, it doesn’t look like me. It’s like Catwoman.

Tell us about your new book, I Like You: Hospitality Under the Influence.

It’s a cookbook and a hospitality book. I have all my recipes and craft projects, and I art-directed it. I put myself in different situations and how I would entertain. Like if you have to entertain a room full of grieving people or a room full of children or old people. It has all the challenges that a hostess has to go up against. There are a lot of craft projects, but I had to cut them because I was going over my page count, so I don’t even give instructions. It’s just like the ideas and then you have to figure it out.

You’re seen as a silly comic, but what about your girlie-girl side? What’s your weakness?

I’m a lotion fanatic. An emollient queen. I’ll try anything new. I like Jurlique products. Expensive creams and lotions. I’ve been like that ever since I was a kid. My first lotion was Jergens. Today something weird happened to me. I was packing to come here (from New York to Los Angeles) and I was out of face lotion. That has never happened to me in my entire life, that’s how busy I am. So I went to this village apothecary that’s next to my house and they carry Decleor, and I bought some oil and cream — incredible products. And right now I’m wearing cocoa butter on my body because I don’t wear perfume.

I hear you also bake a mean cupcake.

The secret is double vanilla, baby! Double vanilla! I’ve always baked and cooked, I’ve always wanted to make something to sell, so I started baking cupcakes when I got my first rabbit. I like cupcakes because I can only bake 12 at a time, so I have to commit myself to it. I decorate each one individually. I like it because it’s busywork I can do with my hands late at night. I’ve been doing it about 12 years, and I sell them at Joe’s on Waverly (Joe the Art of Coffee, 141 Waverly Place, New York, N.Y.).

Can we talk fashion? What kind of accessory phase are you in?

I guess right now I’m trying to live my life like I’m living in a bikini. Like I literally have one key on my keychain. I don’t own a cellphone, never have. I don’t borrow other people’s cellphones. I like less. I like to leave my house without a pocketbook. Sometimes I leave my key with my doorman. So my favorite new accessory is not having any. I haven’t bought any new shoes lately or new clothes. I just like living a simple life.

You mentioned being crafty. What was your last project?

Before I came here, I went to Cosco and got a bunch of Kleenex boxes and covered them in colored tape. It’s kind of like duct tape, but it comes in different colors. I love tape. Anyway, I kept going around and around on the boxes. I plan to give them away as presents.

Here are a couple links to things she talked about:

– Joe The Art of Coffee, this is where she sells her cupcakes.

– I Like You : Hospitality Under the Influence, her new book that comes out in October. 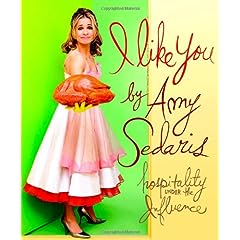