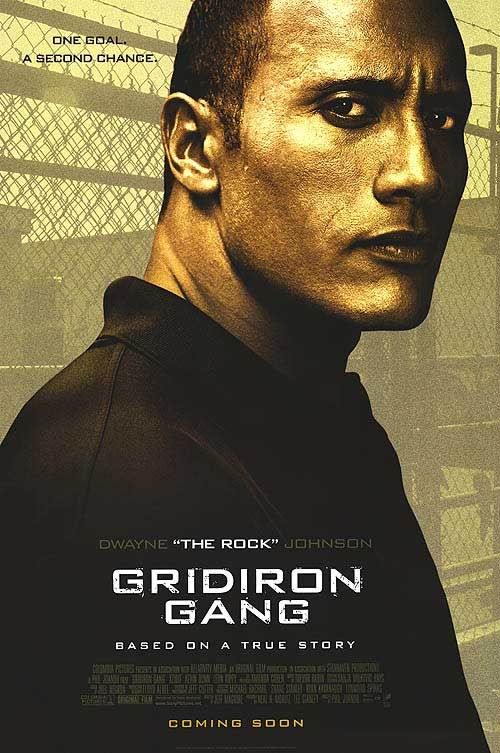 The Rock hits the playing field with Gridiron Gang today, playing a stern counselor in a teen-detention center who persuades the angry gangbanger inmates to empower themselves by playing football.

It may sound like just another underdog sports flick, but to Dwayne “the Rock” Johnson, 34, the story struck a nerve.

Question: Many of us have felt like a loser at some point in our lives. Have you?

Answer: There have been many things in my life that led me to this story. By the time I was 17, I had been arrested multiple times. Each time I felt like that.

And then going into college, I got a full scholarship, and I was on top of the world. My first season, I tore everything away from my shoulder. I had to have it all rebuilt. I fell into a deep depression. I didn’t take my midterms. I left school and was put on academic probation. I felt hopeless.

Then, in 1995, when I graduated, I was ready to go on to the NFL, thinking I was going to live my dream. I ruptured three discs in my back. I had an awful senior year, I didn’t get drafted, and I ended up playing in the Canadian Football League making $250 a week. I felt like a loser again.

I’ve actually felt it a lot in my life. But you keep working until you succeed. Everyone at some point in their lives, whether they have 1 million dollars or 1 dollar, they’ve been there, too.

Q: Did you share those stories with the kids at the camp?

A: There were 130 kids locked up who watched us shoot this movie. And I talked to them every single day. There were two things I told them: “You are going to get a second shot. I know, because I got a second shot. So will you. Don’t screw it up.”

I also told them how there’s no substitute for hard work. No matter what you want to be in life, you have to be ready to bust your butt. I always like to say, “If you’ve never been hungry, you won’t know what it’s like to be full.” I believe in that.

Q: You cry in this film.

A: Yes. It wasn’t easy, but I was fortunate enough to portray a great man (Sean Porter) who lived a hard life and had to struggle with his dad. He lost his mom Oct. 25; my mom was born Oct. 25. There were just a lot of parallels and ironies there. And in this scene, my character is trying to challenge these kids to forgive, when all of a sudden, one of them asks him to do the same. So he let it out.

Q: Does being “the Rock” ever limit your opportunities?

A: To be honest with you, yes. When I first started acting, it opened up a lot of opportunities for me, but at the same time it was a big wall. When you have the ideology of whatever being the Rock means, it was just all action movies.

But I wanted to show I could be a good actor, a versatile actor. Over time I’ve worked to overcome that by taking unconventional roles, like in Be Cool (he played a gay bodyguard). Now I’m lucky to have a variety of roles.

Q: Does that mean you’ve retired the eyebrow?

A: Ha! Yeah, I’ve retired it. Let me tell you why. It’s turned into this cool retro thing. It’s like a big cheese pizza … (laughs): It’s not good all the time, but every once in a while it’s fun.