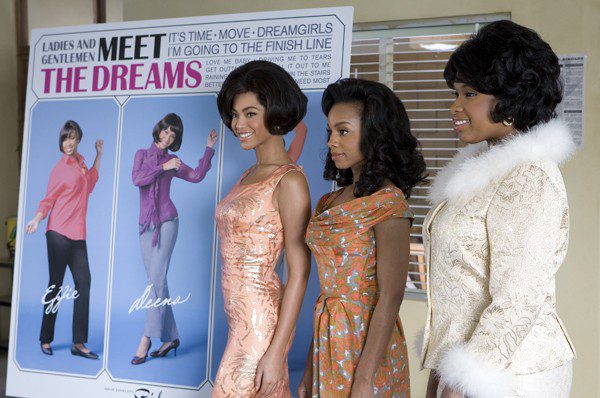 In the new film Dreamgirls (opening Monday), Jennifer Hudson plays Effie White, a talented but undervalued songstress who is booted just before her singing group hits the big time. That predicament is similar to Hudson’s experience as a contestant on Season 3 of American Idol, during which she was unexpectedly eliminated relatively early in the game. That emotional roller coaster obviously helped the 25-year-old with her Dream Girls debut — critics have deemed her acting and singing performances among the best in the film. Calling the morning after the film’s New York premiere, a very hoarse but chatty Hudson (affectionately known as J. Hud) spilled some details of her current whirlwind life.

You’ve had to deal with rumors, red carpets and standing ovations. How are you keeping your cool?

Goodness, I wasn’t expecting the amount or level of attention so soon. It’s been weird, but I’m handling it OK, I think. American Idol definitely helped me prepare. But then again, it is so different. The two are worlds apart. I mean, you still do all your interviews and you’re in the public eye, but it’s still very different. I don’t think I can describe what it’s like right now, but I’m taking it one step at a time. I found it’s the easiest way for me.

After working with Jamie Foxx, Beyonce and Eddie Murphy, who surprised you most?

Probably Beyonce. She’s very shy. I didn’t know that. Even when it came time to dance or sing one of her songs, she would just ball up. I was like, “Come on, all we have is us on the stage, ready to serve it up; it will be OK.” But she would stand along the side because she was too shy to do it.

And I Am Telling You I’m Not Going is your big number. Was it a tough scene to complete?

Yes, it was. It was the last scene filmed for the movie. I can’t remember how many takes it was, there were a lot. We shot it at night over a four-day process, and I recorded it four different times, so I would feel more connected to the character. I just remember thinking, “Let me try that again.” At the movie premiere, when it came on, I was the one curled up in the corner for that scene (laughs). But it was so exciting. There was so much energy in the room. I can’t think of a better moment in my life.

What has been your favorite fantasy moment come true?

I got to hang around my role models. I mean, Beyonce? Jamie Foxx? Eddie Murphy? I love all of them. What fan gets to hang with their role models every single day and see how they work and what they do? I’ll never forget that.

Were there any bonding moments?

We had our moments, but we didn’t go out and do anything. On the first day, we had lots of talking and getting to know each other. The thing I liked was no one came with a brick wall separating them from everyone else. But the one moment I’ll always remember was the first week of filming. I was so nervous. The audience was — well, all I can say, it was the first time I felt like I was somebody big. I ran out onstage to do one of the dance numbers and I heard one of the extras yell my name. I looked over and waved, and the whole audience went crazy screaming for me. I was like, “Oh my gosh, this is really happening.”

What is the one life lesson you want to share?

If you have a goal or a dream, you can never give up because of a setback. Keep your values; stay focused and go for it. You have to believe in your dream, and don’t worry if other people believe in it. It’s your dream, and that’s all you need to worry about.

What it’s about: In this musical based on the Broadway play, three young women in the 1960s join forces with an egotistical manager to become a superstar pop trio.

Did you know: Aside from singing (she’s working on her debut CD), Hudson also is a pro at drawing. Once the Dream Girls excitement dies down, she says she plans to pull out her sketchpad and pencil again. Visit her Web site at jenniferhudsononline.com.