Haven’t blogged in a while. It feels weird. I used to blog every night and let that habit slip away. Every other day I get an email from someone who asks “Where are you, why aren’t you blogging?” I didn’t realize anyone really paid attention!

So I’m going to try and get back into the routine of it. I think blogging is an excellent way of memory keeping when you don’t have time or resources for scrap booking or even snapping photos. I love to click back on my old posts and read goofy stories about my kids or my crafty catastrophes. There is no way I could remember so much detail now. Jeez, the craft convention was less than a month ago, and I’m already forgetting some of the awesome moments.

So before I start my kamikaze blogging session, I’ll bring you up to date on what is happening right now. The kids are both out with friends, we have a new puppy in the house (more on that in a later), I just finished a batch of orders (our rings are selling like Coach purses fresh out of the factory) and was attempting to get into the spirit of The Friday Night Knitting Club.

I don’t know what my problem is with this book. I’ve been anxiously waiting for it when I saw the sale announced on Publisher’s Lunch a couple years back. I bought it a couple weeks ago and have been struggling to get into it. I know it will be a fabulous read, it’s just a little heavy at the front and a bit more serious than what I’ve been into lately. But I’m not giving up. It’s beautifully written and I plan to like it, no matter what!

OK, now about the puppy. It’s Theresa’s (my sister). I think in her former life she was a dog whisperer because pooches are the only thing in this world that seem to make her 100% happy. She has a beagle named Lola, but hasn’t had the time or resources to own another pet.

Let me set the scene how this came to be. At work, we are all under a lot of stress. I work in the newsroom and Theresa works in the online department. The news organization we work for is…let’s just say “mixing things up a bit” and combining both departments. Overall, it’s a smart move because the company has to keep up with these ever-changing times and all, but the bummer is we all have reapply for our gigs. And some of our jobs aren’t there anymore. However, there are new jobs to try for. In theory, it’s an exciting time because we can all apply for whatever dream job we want, but it’s scary because not every one will get their dream title.

While I’m more of a “think positive, have faith, work hard” kind of person, my sis falls on the “HOLY CRAP!!!!” sideline. She’s been frowning ever since the announcements were made. Not even a truckload of puppies could cheer her up these days. So, yesterday as we were leaving the building to head home, what do we see in front of the building?

A truckload of puppies! They did indeed, cheer her up, right at the first sight of them. We both practically leapt over to the scene, as if Godiva were passing out free samples. I had barely picked up one of the puppies when Theresa shoved me out of the way and grabbed a tri-colored male. I stepped back and released a satisfying sigh of relief. It felt good to see her happy, giggly and cudding these little furry snowballs of joy. Shih Tzus!

Theresa held one up to her face, shut her eyes and nuzzled her nose in its neck.
“How much?”, she cooed.
“$375” the lady replied.
“I want one.” Theresa said.

I just about choked on my gum. My mind started putting all the hints together that these folks were, um, shady. They were filthy dirty, missing teeth, kinda looked like they were strung out, the truck had out-of-state plates (Arkansas!) and it reaked of gasoline. Even worse, they had THREE litters – all males. No papers. I tried to talk Theresa into thinking on it overnight, but she marched right over to the ATM, got the cash and handed it over to the woman, who then scribbled out a reciept on a piece of notebook paper.

It’s the day after, and Theresa has no regrets. She says she is happy to have rescued the pup from those scary hillbillies who looked like they had just stepped out of the Texas Chainsaw Massacre set.

Today we babysat the doggy until she got home from work and, yup, I can see why my hermanita fell in love with him. He doesn’t have a name yet, I think she is going to call him Rocco. 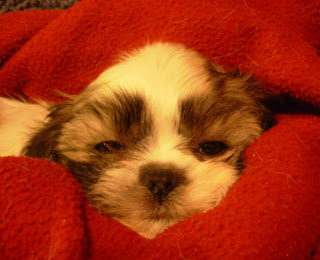