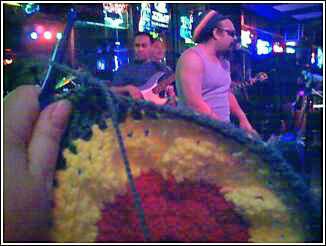 I have MTD (Multi Task Disorder). I swear, I can never just sit still and chillax, I always, always have to be doing something productive. Even at nightclubs!

This past Saturday I went with Patrick to his show. In typical bandwife style, I sat in the front booth and nursed a giant-sized diet coke with lemon (it’s no fun to drink all alone!) and clapped after each song. It was 9:45 p.m. and the show ended at 1:30 a.m.

Not that I don’t appreciate the Latin style reggae grooves of my hubby’s original music, but dang – it was going to be a long night sitting there, staring at the band with nothing to do.

As I smiled at Paul, the guitar player, I noticed the faded, ragged tam on his head that I had crocheted for him oh…about 12 years ago. Ever since that day, he’s worn it from morning until night. It was faded, stained and even had begun to unravel along the bottom.

Next thing I knew, my super she-ro Crafty Chica alter ego took over! My mission for the night was to make Paul a new tam and surprise him at the end of the evening. You know, when the club has cleared out and the band members are all grumpy about tearing down the sound system? I thought it would be a fun pick-me-up for him.

In between songs, I waved to Patrick and slipped across the front of the dance floor and darted over to the Wal*Mart across the street – the only place to find yarn, mini-scissors and a crochet hook for under $15 after 10 p.m.

I came back, scooted back in the booth, cracked my knuckles in front of my chest and went to work on Paul’s tam. Talk about speed crochet! 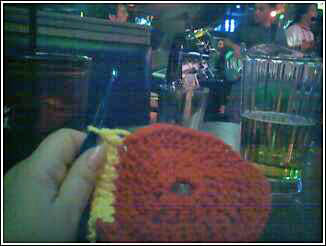 Here it is about 40 minutes into the session. Coming along nice. Paul stood on the other side of the stage,so he couldn’t even tell what I was working on. i’m sure I must have looked strange to everyone dancing. Hello? Who crochets in a nightclub? Weird people like me with MTD!! 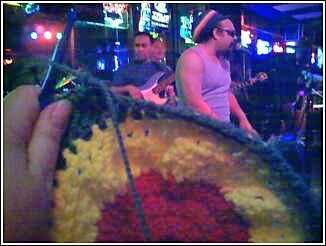 Here it is a little more in. I used green, yellow and red. At around 1 am, I had this sucker pretty much done. By 1:30 I was trimming and tying off the loose ends inside the hat. Just as I held it up to inspect it, some guy came up and wanted to buy it from me! I told him it wasn’t for sale, and then showed it to Patrick (that’s him at the keyboards), who then put in an order for a white one.

I handed it to Paul while he was wrapping up his cords and boy was he a happy reggae camper!!! It fit just right and he could throw the old one away. Hopefully he won’t have to wait another 12 years for me to make him another one! 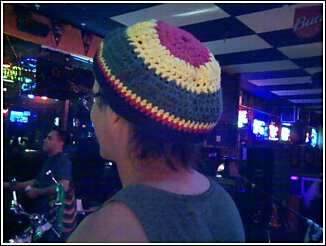