Bad hair day. To the extreme. 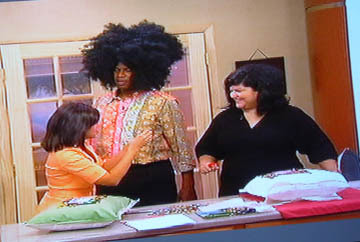 This morning I had a craft segment on a popular morning show and I had major hair issues.

The past few years I’ve been big on relaxers. Recently I decided I wanted to go back to having my natural curly hair 24/7 and right now it is at the weird, awkward “in-between” stage. This morning for my TV segment, I washed it, put it in rollers to smooth it and even gave it a good laquer spray. I was 100% confident because I’ve lost six pounds in the last two weeks! i was really to show it off!

Half way through my segment, the weather guy busts into the scene wearing this huge afro wig. I giggled and went along with it. “Morning TV is so fun!”, I thought. I even offered to lend him my iron to straighten his funny supersized hair.

After the segment, I called Patrick. “How did my segment go?” I asked cheerfully.

“Was it the craft or my hair?”

DeAngelo happened to be home from school today. The first thing he said when he saw me was, “Mom, that was mean of Brad to make fun of your hair in front of everyone on TV.”

I watched the DVR and realized that the weatherguy was mocking me on live TV – er, rather mocking my awful hair. It’s am orning show where they are supposed to have fun. Yah, I admit, my ‘do was a disaster. I cringed as I watched the playback. There was a big halo of fuzz all around the foundation of my hair and it looked like I was wearing a wig made from caveman backhair.

I watched the segment over and over, thinking of how all these thousands of viewers were probably laughing at me. I don’t know how I feel right now. It’s not like I feel totally offended but (a little, maybe??) because I know it’s all in good fun. But my feelings are hurt a bit, only because I’m a wimpy middle child.

Bottom line? I’m not one to complain. I’m grateful to have the chance to go on the show and share my crafty ideas! I’m grateful to have hair. I wrote the producer and told her I’d have my relaxer in time for my next segment. I don’t want curly hair that bad! It’s just hair!!!