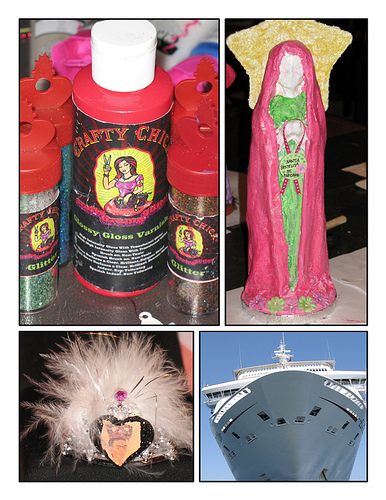 It’s taken me a good two days just to wind down from the fun we had. First of all, this group was twice as large as last year. Patrick and I drove from Phoenix to San Diego with his mom, Susie, and her cousin, Cecelia. I love road trips. After being married to Patrick for 18 years, we both learned from his mom that he was conceived on Halloween night. Explains a lot, and I mean that in a good way!!

As soon as we reached the port and started unloading our suitcases, I spotted the cruisers. I had never met them in person, only online, and pictres on our message board – but they all had a certain kind of crafty glow about them. Or they were wearing lots of wild handmade jewelry or clothing!

The morning before we left our hotel for the port, I realized I need to have some kind of icebreaker for our meet-and-greet cocktail party – or at least name tags! I’m learning as I go, OK? So we drove to Von’s and I bought blank index cards, twine, and a hole puncher.

Once we docked, the chicas from the last cruise helped me make the impromptu necklace name badges. I also made little slips of paper, and each one had the name of one of the cruisers. I thought it would be fun if each person had a secret pal. It would be their job to get to know that person, and then make them a little gift during the week. We’d present them at the closing cocktail party.

Let me tell you about these cocktail parties. 90 minutes of free frou-frou drinks. The waiters walk over holding drink trays filled with colorful concoctions. Hello, rum punch! I passed out the tote bags and we exchanged names. We were off to a great start! 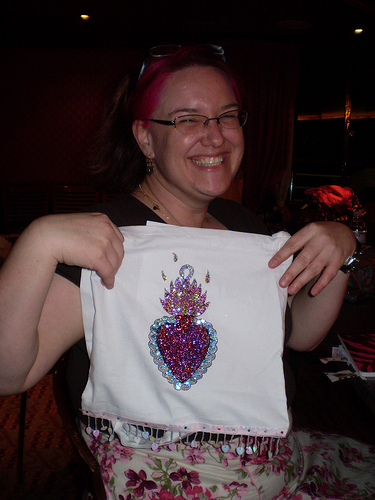 Tuesday morning was our first full day of crafting. Carnival gave us the main conference room for almost the whole cruise, so it became our home base. We decorated our Crafty Chica totes with glitters and paints. I set out little bells on all the tables so every time someone did something they were proud of, they would ring the bell and show their masterpiece to the group.

The first bell ringer came from my mom-in-law. “I have a bell ringer”, she told me. “This is the first time I’ve ever put glitter on anything.”

I rang the bell and announced it to the group. They all cheered and clapped and sang out “Yay! She’s no longer a glitter virgin!!!”

Later in the day we began working on our Create-A-Saints. These are plaster statues I designed for the new product line. There is a saint, and angel and a queen. You decorate it for something you want or are good at, like “The Queen of Clunky Jewelry”, etc…These saints came out absolutely amazing.

Wednesday was a bit rough. We got word early morning that Patrick’s Aunt Socorro had passed away from cancer. Patrick’s mom was very sad, as were we, and it was especially hard being in Mexico, when the rest of the family is mourning in Phoenix. We made it a good, memorable day though. We went to Cabo Wabo in Cabo San Lucas and shared happy memories about Socorro. She loved Coors, so we ordered Pacificos and clinked our bottles in her honor. I went on to drink five cocktails that day, and Patrick and I drew Sharpie tattoos on each other’s arms. Cindy Kovack taught the evening class and it gave me time to charge my batteries for the next day! The next morning I learned that students stayed in the room very late. Midnight crafting, love it!!!

Thursday was a marathon art day. We made these really cool journals and love shrines. 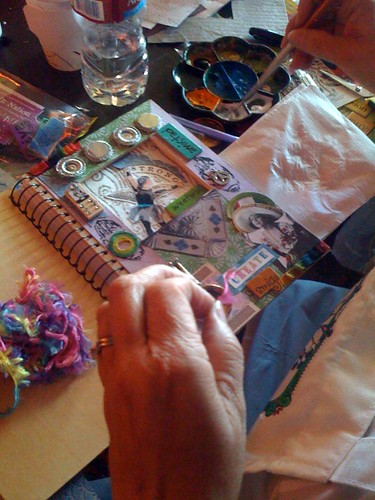 Oh! One of our cruisers, Julie, won a slot in the Carnival Legends show. She had to practice her Madonna performance for Friday night. Friday we hit up Ensenada, and then we had our exchange party, and then we watched Julie grace the huge stage and perform “Like A Virgin” in front of 1,000 people. She even gave a shout out to the chicas!

Sure, it was super sweet that our rooms got made up twice a day, and that the food was always yummy (they had a chocolate buffet!!), and our waiter, Carlos was a Peruvian dreamboat…but what really made my whole week? The people in our groups.

AND the chocolate dessert at dinner every night. It was like warm cake batter in a cup. 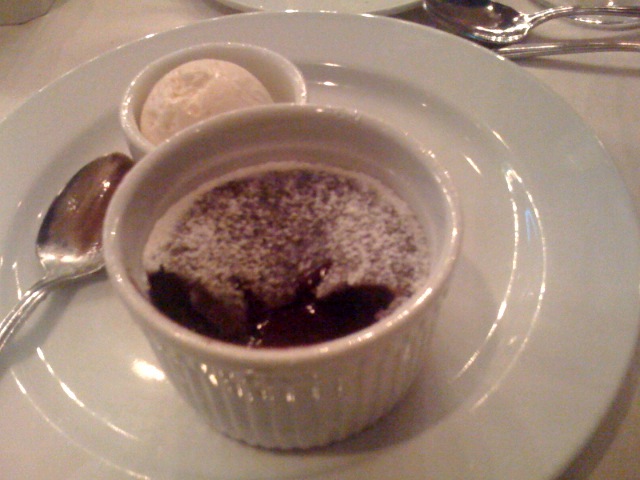 Six mother/daughter sets
Four sibling sets
Three husband and wife sets
Two cancer survivors
Two people there on behalf of a loved one who passed away
Several people who came all by themselves, just to meet other crafty people!
And friend pairings too!

I had no idea how special this gathering would be for everyone involved. I choked up more than once thinking about it. It was so hard to say goodbye! Plus, there were many of us who had only known each other online. Like Yoli, Mala and Krissi. We chat all the with each other on MySpace, so it was fun to meet them in person. And then there were four ladies who returned from last year – Teresa, Corky, Alisa and Ann.

It makes me think that next year I want to do more meaningful projects, and make it a type of self-empowerment cruise, not all mushy style, but just art ideas that people will look at and say, “Making that changed my life!” 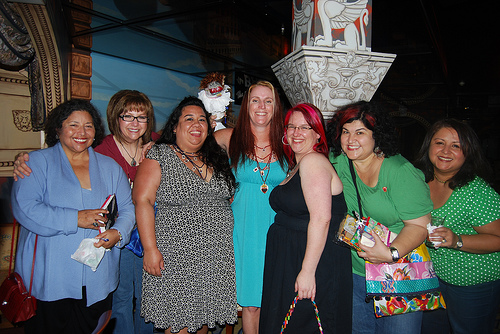 (Some of us pose for a picture)

I’ve barely scratched the surface. I’m so excited, I’m still in four-alarm giddy mode and I’m already making plans for next year’s cruise. I do know aside from the cocktail parties, I want to add a chocolate tasting and a hand massage! Stay tuned for sign up time! 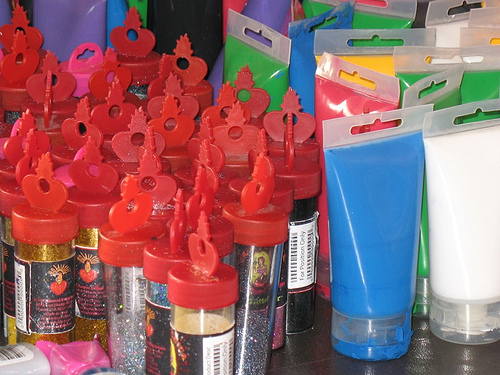 And I owe a debt of thanks to the following companies who donated supplies for our tote bags!

PHOTOS from the cruise!!!