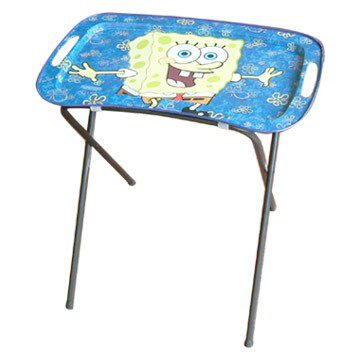 It started from a TV tray

All this talk about art studios/work rooms/craft corners today inspired some of my friends to share pictures of their work areas too. Like Yoli and Krissi (TK).

It got me thinking – what was your first workspace? Mine was a metal TV tray just like the picture, but it wasn’t SpongeBob, it was a retro one I bought at Do Wah Diddy (RIP). I had no idea how far that little tray would take me!

My very first project was a colorful safety pin bracelet. I started making them for boutiques. That little tray served me well for my production line – until I started traveling. I used to manage bands (Patrick’s!) so I packed my beads and tools in small boxes and slipped them in my backpack. I would make my bracelets anywhere and anytime: On the hood of my car, waiting at the airport, road trips (no, I wasn’t driving), at the park…

Detour memory: For a short time (one day), I went from making safety pin bracelets to making safety pin dreadlock holders thanks to a Jamaican reggae band called Messenjah. I worked as their road manager for three years every summer when they came through Arizona. One day while they were rehearsing and doing sound check, I sat at the end of the stage and made my fancy bracelets.

I noticed how the guys always had to use boring string to secure their thick locks behind their head, so I thought “What a great idea! I’ll make green, gold and red dread holders with the safety pins held together with Velcro!”.

Their dreadlocks were very sacred and spiritual to them, they took years to grow. So I worked furiously for hours making each of the band members a cool hair accessory that had the Rasta vibe, plus was 100% functional. I presented them as a surprise before showtime and they LOVED them! They put them on, and hugged me.

Oh geez. It was early in my crafty adventures. I didn’t know about critical thinking, or engineering. I never imagined for a second that the Velcro would get stuck to their hair. On stage. During the concert.

The lead singer’s began to come off while he was dancing. When the song ended, he quickly reached behind to remove it. From the dance floor I could see the hair ripping from his head because it had bonded to the Velcro. I will never forget the look of horror on his face. It happened to every band member that night. Talk about wanting to hide for eternity! They all forgave me though!

I ditched the whole safety pin accessory line after that.

OK, back to the workspace!!! I later upgraded to a card table. Actually two. I had one in my bedroom, and one in the trunk of my car for impromptu off-site crafting sessions. After Patrick and I got married, we made our bedroom the art room where we fit in a kitchen table in the corner. Later it expanded to the living room on top of an office desk. Then it went to the whole family room. When we bought our house in the late ’90s, we took over the living room and put up a wall and door to close it off.

Today we decided to start all over and make our garage our new studio so we can have our living room back. We’ve been talking about it for years, but we plan to make it happen in 2008.

The bottom line is that if you want to make art, you’ll find a way to do it. It doesn’t matter is your space is big or small, messy or neat, portable or stationary. When I lived at my parents, all I had was a card table in my room. At one point, I didn’t even have that. I had a train case packed with supplies. I never had a quarter for a phone call, but I did have two types of needle nose pliers at any given moment!