The glitter troops are ready. Ellen DeGeneres, here we come! 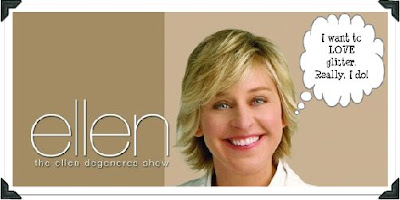 We’ve set a new date for the Safe Sparkle Rally! I’m writing to you to see if you or any of your posse would be interested in joining me and other glitter lovers across the land in standing up in the name of sparkle in front of Ellen DeGeneres’
Burbank studio!

Ellen hates glitter and is (jokingly??) trying to get it banned!

Attached is the press release that went to Ellen’s producers today,
along with some ideas for safe-sparkle alternatives. I’ll have samples
of these at the rally, bring yours too!!!!

WHO: Lead by Kathy Cano-Murillo, the Crafty Chica. Also attending are:

– Cathie Filian (co-host of Creative Juice on the DIY Network)

– Many more! And anyone else who wants to join us!

I LOVE Ellen and was heartbroken when she started dissing glitter on
her show because it is messy and gets everywhere. She even went on a
jumbotron on Hillary Clinton’s press rally and asked if she would ban
glitter if Hills became our next Prez. I’ve blogged about it and sent
letters to her explaining all the different kinds of glitters.

I want us crafters to educate Ellen and let her know about the many
“safe sparkle” alternatives out there. We could help her choose the
right glitter for her, so she will stop judging all glitter the same.
It is LOOSE glitter she hates, so her fans need to know to send her
other kinds of sparkle. Ellen is a sparkling chica, she deserves
glitter that suits her!

OK…I know glitter won’t be banned, but I thought it would be fun if
all of us crafters stepped up with “safe sparkle” alternatives. I
think Ellen would get a kick out of it and maybe even come outside to
meet us!