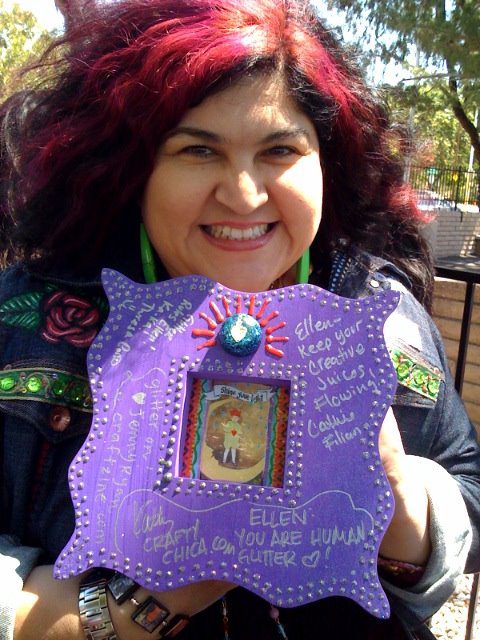 (Our gift for Ellen)

Just woke up after another long day of Ellen/glittermania. Man, I am zonked, but what a fun adventure it was!

Yesterday, Jenny Ryan, Cathie Filian, my sister and myself all showed up at Ellen’s studio at 11. We waited in the holding pen – the same place where people stood yesterday and watched us wave our signs. It was weird being on the other side of the fence. At 1 p.m. they horded us to another holding pen on the compound, and that after we went through a seach that was more extensive than the TSA at the airport!

We waited for another hour, and they had TV sets airing the recent shows. We were bummed because they aired Wednesday’s show, which was taped Tuesday when we were there, and – nothing on our rally 🙂 We figured for SURE they would roll it while we were in the audience for Thursday’s show.

Here’s a little backstory: Yesterday morning I woke up early and made Ellen a gift. I know she HATES loose glitter, so I made a “safe sparkle” frame. I painted it purple and coated it with a layer of Tulip Sparkles 3D Fashion Paint (purple). I let it dry until it had a smooth, thick glittery finish. Then I took silver glitter 3D paint and made microdot borders. Next, I glued a resin piece that had glitter embedded inside of it, and also a milagro heart. We all signed it for her. Cathie Filian had a package of vaccummed-sealed loose glitter. We gave her that too, as well as a copy of Craft: Magazine.

When we turned it all to Ellen’s handler (we had to sign paperwork too), she looked at the frame, cocked an eyebrow, shook her head, and goes, “Oh….Ellen doesn’t like anything with glitter…”

“It’s safe sparkle glitter!” I shot back. “Look, it is liquid glitter that is dry, it will not release even a single flake! And that piece right there has glitter embedded into resin! Ellen can have her twinkle without any stress of mess!”

The girl ran her hand over the frame and then inspected her fingers for sparkly residue. “You’re right! Wow, this is really neat! She’ll like this!”

We eventually made it into the studio, and then our seats. Center row. We waited with baited breath. I brought my daughter’s 6th grade portrait where there is a fleck of glitter on her cheek. I thought Ellen would like that. The show started. Alas, someone from our row did get called to the stage, but it was not us. It was a girl who was chosen to wear goggles and plant her face in a huge pizza pie.

The rest of the show went without incident. There was a time when Ellen was talking about all the things she likes, and I wanted soooo bad to yell out “GLITTER!” but was worried I’d get thrown out, so I bit my tongue.

Just when I was feeling sad because they didn’t show the footage of our rally, Ellen announced…that everyone in the audience would get free pizza!

We are thinking maybe her producers wil show it another day, or maybe they are saving up all the gliiterphernalia she has been receiving and will show it all on one day. In the meantime, the four of us have decided that we are going to follow up and keep sending Ellen safe sparkle projects until she finally notices!

And we also decided to keep the Etsy sale up and running through the end of the month toget more money raised on behalf of generous glitter-loving crafters!

OK, now that this is all over and done with, Im going to get busy and post more crafty ideas for you!

Here are som e posts from yesterday about the events!