Before I begin this post about awards, know that it’s all in fun. I know the true awards – and the only ones that matter – are for love, family, health, friends. I have an abundance of those and nothing will ever top them!

Alrighty, now on to the superficial stuff! 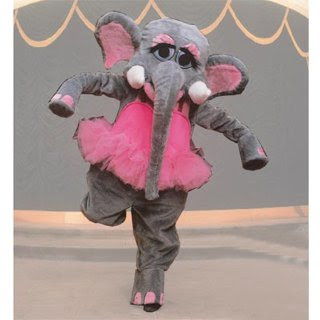 1. Fourth grade. One free ballet lesson. I had to guess the number of marbles in a jar at my school fair, and I nailed it. My mom was soooo excited. I was pretty much a tomboy, and the thought of someone teaching me to be graceful sent chills of joy up her spine.

I get to the class to see all the students were tall, slender and sporting pretty tutus and leotards. I smiled and waved in my red Keds, KMart cut-offs and a ribbed tank.

The teacher congratulated me for the win, and welcomed me to my free lesson. She had all the girls run and delicately leap across the dance floor, one by one. When they finished she asked me to do it. I remember giving it my all. When you’re that age, you do as you are told, right? At least back then we did.

Ugh. It was as though time switched into slow motion. “Thunk. Thunk. Thunk.” was the sound of my big feet pounding across the cushioned mat as I did my most heartfelt pseudo-ballet gallop. When I finished, I looked the teacher only to see a horrified expression. The other girls broke out in a fit of giggles.

The remainder of the class felt like eternity. My mom came to pick me up in her flashy olive green Monte Carlo, and before I could get a word out she asked, “Did you like it? Want me to sign you up?”

Needless to say, that didn’t happen.

2. Freshman year in high school. I stayed up all night listening to KUPD radio, trying to call in and win Pat Benatar’s first album. I did it! I was the sixth caller! The next day after school, my mom drove me 50 minutes across the city to pick up the album. We walked in the station to the front desk, gave them my name, and the cool-looking secretary handed over my coveted prize. My mom gasped at the cover.

“We drove all this way for that? That girl looks like a hussy!” she said. 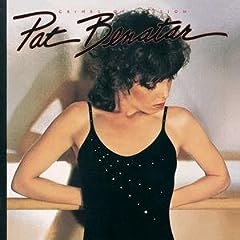 “No, mom, she’s cool! She used to sing opera and now she sings rock and roll. There aren’t many female artists on the radio, she is forging the way for other –“

“OK! OK!” My mom replied, not wanting to spoil my happy moment. Maybe she still felt sorry for me because of the Fourth Grade Ballerina Trauma Lesson.

3. My first year in college. I dated this guy (not Patrick) who loved to enter contests. He was super sweet, but like so many of us, he wanted a short cut to riches. While I worked on my homework, he would sit with me at the library, open a contest magazine, and fill out postcards with his name and address. Dozens of them. He did this all the time and never won anything. One day I watched him, sighed, and then I set aside my books. I grabbed a postcard and scribbled my info. One postcard. He mailed it along with his, and weeks later I received a prize. A check for $100! Of course, he made me spend it on him because it was his idea.

NOTE: Um. It just dawned on me that the above examples, aren’t actually “awards”. But I invested a lot of time writing them all out, so let’s just say they qualify. Mmm-kay? Thanks.

Opens a new tab and clicks to dictionary.com

NOTE #2: I just looked up the definition of “award”: To give as due or merited; assign or bestow: to award prizes. The above examples are awards! Yay! So forget the first note. Mmm-kay? Thanks!

The next thing I award was something that I am still very proud of. 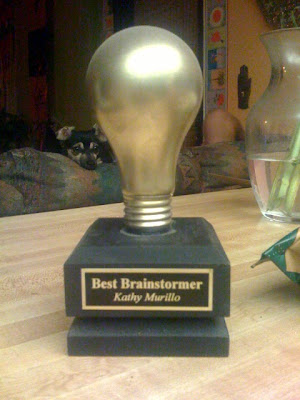 4. This was when I worked in the features newsroom. For six years in a row, my idea was always selected for our “Best of” issue. My writing may have never been as tight as my co-workers, but I rocked at story ideas, spins, centerpieces, and theme packages. This award is actually just a cheap light bulb spray-painted gold, but to me, it may as well be covered in diamonds because I loved the editor who gave it to me.

So why the walk down award-memory lane?

Because this week I found out I won Award no. 5! It’s bigger than any of the others! The news just about knocked me over in shock.

It is the Profiles of Success Latino Leadership Award for Arts and Culture.

Every year, the selection committee at Valle del Sol pours through nomination forms that have been submitted by people in the community. They then choose a handful of the nominees, and recognize them on a very large scale, culminating at an awards luncheon in September that kicks off National Hispanic Heritage Month. More than 1700 people attend! This is the event I always make the centerpieces for.

The people who are chosen are usually high-ranking corporate officials and uber-polished professionals. I’m neither. I found out my friend, Lucia, nominated me and the committee liked that I was helping the community in a non-traditional way (my web site and books)!

Friday morning was the announcement breakfast, where 150 people attended. Patrick, my dad, and my sister Theresa joined me. It didn’t quite sink in to my dad that I had won.

“The mayor of Tolleson is here,” he said. “They say he won one of the awards.”

“I know, that’s cool for him! Dad, I won one too, just like the mayor of Tolleson.”

Later on Dad asked, “So are there other up-and-coming businesswomen who were invited this morning?”

“Dad, I’m here because I won one of the awards.”

Geez! My sister and I smiled at each other. “Dad, it’s a done deal. I’m one of the Profiles of Success recipients for 2008! I won, someone nominated me, and the selection committee picked me. I’m not up against anyone.”

The committee presented me and the other recipients with a “certificate of selection” plaque, and we had a hammy photo shoot in the garden. September 5th at the luncheon, they will give me the award-award. Channel 12 is coming over soon to film a video package that will be shown on the Jumbotrons inside the convention center. I’ve already started to bite my nails in anticipation.

“Is it like an Oscar?” my dad asked Patrick.

“Yes, for Latinos in Arizona, it is,” Patrick told him. “Actually, I guess you could say it’s more like a Pancho.” 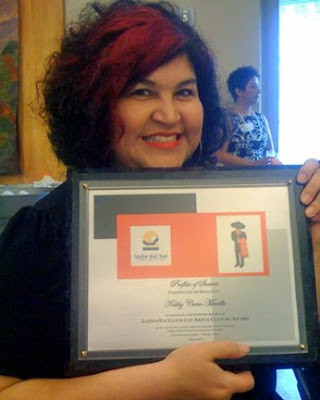 Me with the official paper that confirms I won the award! Thank you Valle del Sol! I promise to work hard to live up to this! 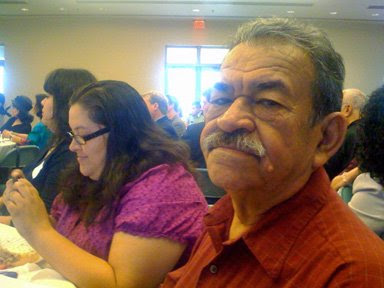 My dad, with Teresa next to him. She is on her iPhone, which is a dead giveaway that we are related!

The art of reinvention for moms

5 thoughts on “A life awarded.”

Corazón Craft Night: How to host an online craft party

Craft Room Tour: Take a Look Inside My Studio!