This may be my kitschiest project yet: Empanada pin cushions! After seeing so many fiber artists have their way with cupcake pincushions, I thought I’d throw a little needle love to Mexican puff pastries.

Empanadas are basically fruit turnovers. My Nana Cano used to make them every weekend – cherry, pumpkin, pineapple, lemon, apple and even mincemeat for my dad. Puff pastries are also popular in other countries as well, but my design is inspired by the ones I’ve grown up with here in Phoenix.

I actually made these last Saturday night at The Dirty Devil nightclub where Patrick’s band was performing. Under the light of my iPhone, I stitched away. I used white felt, and then painted it to give it a realistic look. It worked. The next day, both my kids picked these up to take a bite and were mad because they were fake! I would call that a success!

NOTE: Yes, you can use a sewing machine on these, but because I knew I would be working in a dimly-lit area (the nightclub), I chose contrasting embroidery thread to hand sew.

Here’s how to make them! 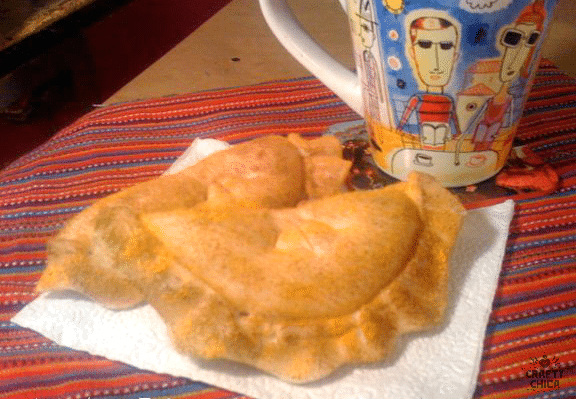 1. Take a piece of white craft felt. Fold it over from the short side, and cut out the shape of the empanada. Keep the fold at the bottom. Now cut the other end of the felt into a strip that is about 3″ wide.

2. With the felt still folded in half, stitch the empanada about half away around the curve. Stuff with a lot of batting.

3. Take the strip, fold it lengthwise and stitch it with the embroidery thread along the edge of the curve, gather it here and there to make it ruffled.

4. Tuft the empanada in the center with three stitches. Cut the edge in a curvy design.

5. Add a bit of white and yellow to the brown paint until you get a nice baked look. Use the paint brush to stipple all over the empanada. Let dry. 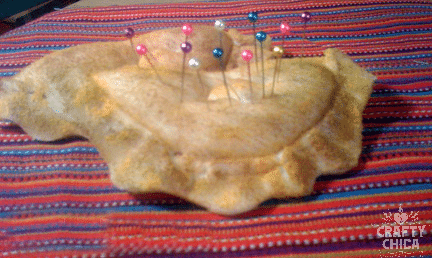 How to make new fabric from scraps