There was a tight fit at last night’s Michaels’event. Patrick and I were about five minutes late (wrong turn!), and when we entered, there was a sea of happy faces waiting for us. I never had a chance to sit down, which I didn’t mind at all. The manager and staff were so cool, and they even had us sign the event poster because they were going to have it framed and mounted for the store! They even had cookies too!

Some ladies during the night kept saying “I’ll see you later tonight!” and I was thinking, “Huh?”

And then our friend and Crafty Chica cruiser, Corky, gave me this look: 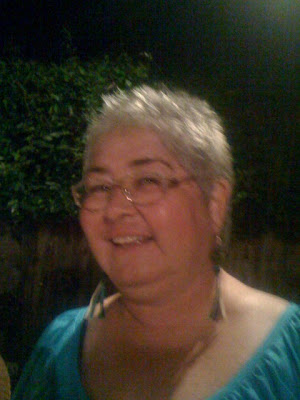 Ahhh…crafty indeed! She planned a little post-event reception at her sister’s house! Before the event ended, Corky sprinted out and bought us carne asada burritos for dinner and then led us through the San Jose streets to the party. It turned out to be one of the best gatherings ever. We loved chatting with all these crafty, creative women about art, life, traveling and food too. Corky is the best! 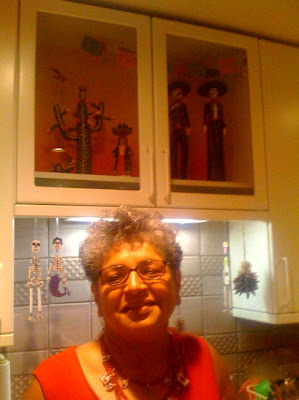 This is her sister who hosted the reception. She said she isn’t crafty, but all kinds of accents in her house proved otherwise. Look at this idea – she turned a set of cabinets into a window/shadowbox display in her kitchen. And she is currently making a huge flagstone mosaic in front of her house. I am so excited to get home and do the same at our house! (Note to Gina, Darian, Melissa and Cesar: AFTER our Heard stuff is done, of course!) 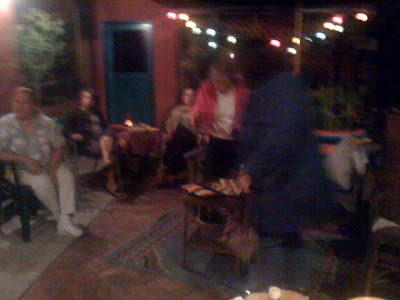 We came home around 11 ish and crashed on our La Quinta beds! We just barely read the fine print to learn that many locations allow small animals. Good thing we didn’t know that before we left – we would have brought Chacha!

Speaking of her, here is a picture of her at the doggie maternity ward, where skilled technicians are watching her until we get home. Doesn’t she look soooo offended that she is there, and not home? 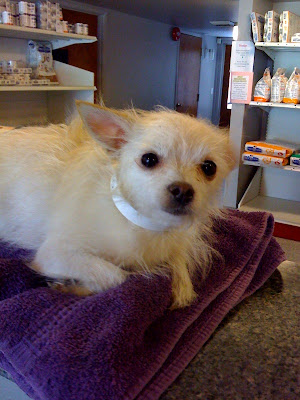 And here is Bootsie. Doesn’t he look so sad, that we are still gone? He looks so hurt that he can’t even put up those Chihuahua radar ears. Don’t get me started on the dogs. I’ll never stop! 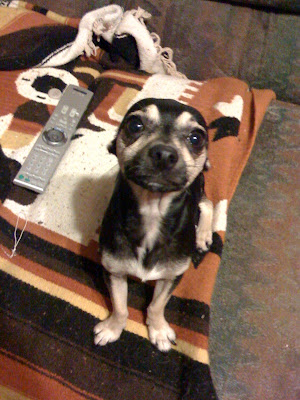 Well, gotta jam. We are leaving for Sac-town (Sacramento) in a few minutes, where the enchanting Yoli from Sacred Snatch is hosting a BBQ for us with some of the local crafters! Then we are off to the night’s Michaels event and tomorrow we wrap up in Fresno!

Phoenix Fridas: Our Visit to ConchaCon & Mi Vida in a Chevy Blazer!

Recap: My Pop-up at Mi Vida in Los Angeles!