I’m warning you this will be a long post, but not as long as the day we had yesterday. It was one of the best days of my life! Jam-packed with lots of cool people and memories. There was so much going on that I didn’t even have time to snap a lot of pictures.

We woke up at 6:30 a.m. and headed out to L.A. from San Diego. By 10:30 we were at Olvera Street, doing some retail damage at the shops. I bought Indian Bindi stickers to use in my collages! One of the stores, Olvera’s Candle Shop, used to carry our artwork in the early 90s. The owner happened to come by and recognized us! Not by our faces, but by my purse and jewelry. I signed copies of my books and we chatted about the crazy, wonderful explosion of Latino crafting that is happening across the country right now. Her shop, and many others there, are filled with clever, handmade items, all with a hip Latin twist to them. 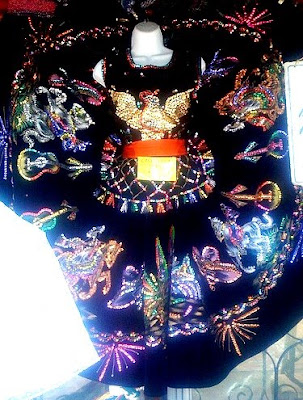 Here is a dress from one of the shops. All that work is done with sequins!! We stopped to eat at La Golodrina, the oldest restaurant in L.A. (we were told), and had the mariachis play “Un Poño de Tierra” (A Handful of Dirt). It is a ballad about only taking a handful of dirt with you when you die, none of the material things matter in the end. This lady sang it so powerful that Maya began to cry, and then of course I did too! 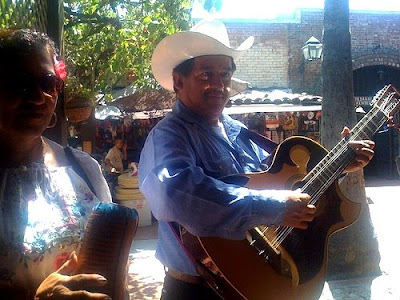 We met with Rosemond Perdue Cranner from Bungalow 3, and brainstormed new webisode ideas. After that we raced off to my friend Kerith’s house for my mask making session. Artist Peter Harper (Ben’s brother) is doing a show of all different bronze masks on different kinds of people and I was invited to be one of them. The pictures speak for themselves! 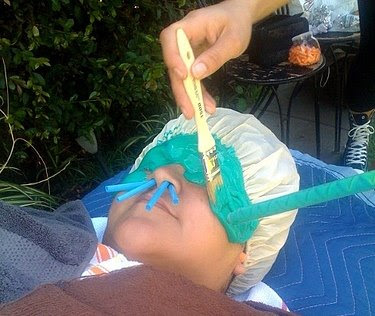 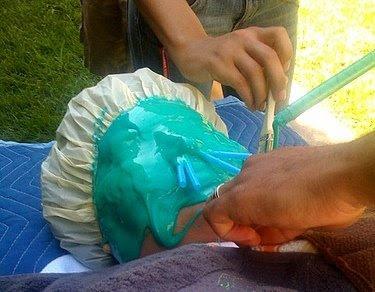 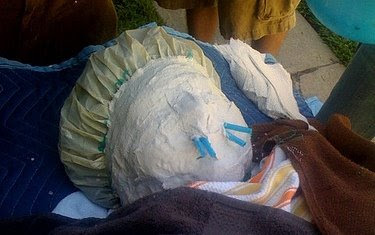 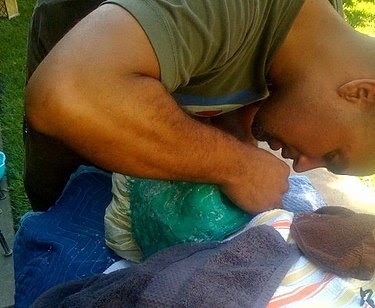 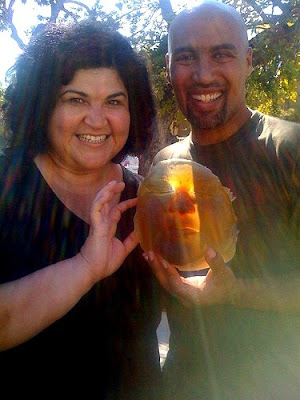 Once we were done, there was no time to go to the hotel before our Michaels event. So with Vaseline coated all around my hairline (I have so much hair no one could notice), and a quick makeup job, we were on our way! 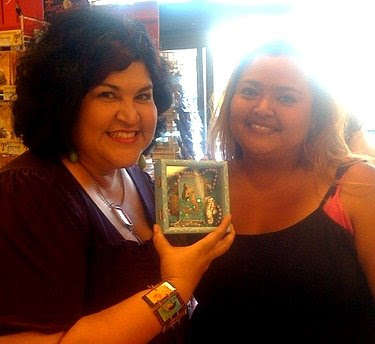 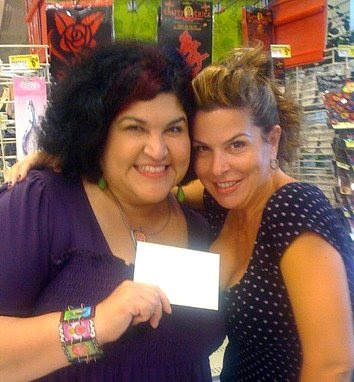 The place was PACKED! There was a line that lasted for an hour and the display was cleaned out by the end of the night. People even brought me gifts! It was a star-studded crafty event. Among the crowd were some friends from MySpace (Red and Janice), Blogger (Carol B), the cruise (Belen and Jesse), Chicken Soup for the Latino Soul (Zulmara!) etc. Cyndi from Santa Clarita Craft Lab, Sew Darn Jenny (Ryan), Cathy (Callahan) of California, The Craft Whore (Stacy McQueen), Lola y Lola (Miriam and Yessenia), Meryl Butler of 90 Minute Quilts, and even movie star Jackie Guerra!! Gosh, I hope I didn’t miss anyone! 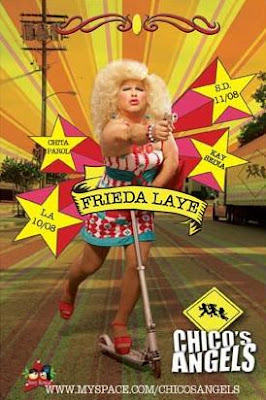 There were gobs more people (lots of kids and teens too!) and I’m so thankful everyone showed up to make it such a fun night. The team at Michaels was awesome too, they talked with the customers too and helped us with any little thing we needed.

People always ask me if I feel like a crafty rockstar, and I don’t let those thoughts go past my ears. I admit, last night I had a teeny feeling of a glittery cape and platform KISS shoes – only because people are just so cool and kind and gracious. But then I realized that this is happening to me for a bigger reason. I know so many people from different genres and groups and it’s my job to hook them all up to help them move ahead in their careers. Art makes the world a better place. So I worked hard during the night introducing everyone to eachother and I got goosebumps to see everyone chatting and hugging by the time we left.

One thing We ALL agreed on – we are planning to do another Safe Sparkle Ellen Rally this fall!

We stayed until the store was about to close and then a few of us went out to La Cabinita to eat a late dinner.

It was 11 p.m. by the time we arrived to La Quinta. This location is right by the airport, and it is super swanky and mod. We noted its coolness, dumped our suitcases on the floor, and dove on the beds. They were sooooo comfy, we all konked out within minutes. Well, except me. I did shower first to get that Vaseline off my hair!

We just came back from the yummy complimentary breakfast downstairs (whoever invented that idea – I *heart* you).

We are packing up and heading out to Paso Robles Michaels tonight – 6-8 p.m., hope to see you there!

Thank you again to everyone who I came in contact with yesterday! I will never forget that day!