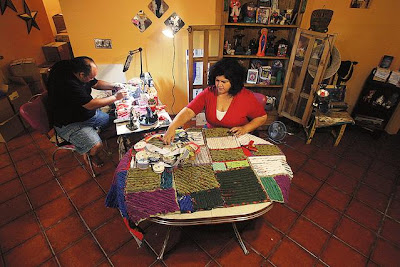 Reporter Natalia Lopera wrote not one – but two features on us for today’s paper in Tucson! English and Spanish!

It was 18 years ago when Kathy Cano-Murillo and her husband used their last $20 to purchase materials for making crafts in the hopes of selling them along Fourth Avenue.
Today, Cano-Murillo — known as Crafty Chica — has become a personality in the art world and recently launched a line of products that arrived on the shelves of craft stores, including Michaels, last month.
Selected stores sell kits for making art pieces similar to what Cano-Murillo and her husband, Patrick Murillo, create through their business, Chicano Pop Art. Do-it-yourself love shrines or statue decoration kits, stencils and paper for scrapbooking with Day of the Dead themes are among the 41 products in the line.
The 43-year-old woman, who now lives in Phoenix, has also sold products at Lowe’s and Target. She also has had corporate customers such as Microsoft and McDonald’s and fans from across the United States, Europe and Mexico.
Cano-Murillo also writes a crafts column published in 40 newspapers nationwide, and she has written six books on the subject. Her Web site, www.craftychica.com, which gets about 50,000 visitors a month, offers artistic advice.
As if that weren’t enough, she stars in crafting Webisodes on Lifetime TV’s Web site. And she annually has her Crafty Chica cruise, where participants craft non-stop.
Cano-Murillo declined to disclose her earnings from the business. Duncan Enterprises, the company that packages the line of products sold at Michaels, declined to give sales figures.
Yet it’s obvious Cano-Murillo has come a long way from her starting point in the Old Pueblo. She and her husband moved to Tucson in 1990 with the $2,000 they got at their “dollar dance” at their wedding. He landed a job with a reggae band.
The money was gone within three months, and with a $20 bill in hand, they bought watercolor paper, acrylic craft paint and earring hooks.
Only one boutique, Seis Seis Seis, which was in the Fourth Avenue shopping district, expressed interest in selling their earrings, and the owner, Alex Kollar became her sales representative, Cano-Murillo said. “That’s how we got our start,” she said. “Meeting that lady at that store.”
The couple wanted to expand their reach, and, working from home, they created an array of items such as decorative boxes, magnets and flowerpots. That same year they moved to Phoenix, and continued to fill orders from Seis Seis Seis and El Charro Café. They had also branched out and were selling to Bloomingdale’s, Hallmark and shops as far away as New York, like Serendipity 3 and Alphabets.
“We were filling hundreds of orders, and we had no business experience at all,” Cano-Murillo said. “I mean, we had no startup funds, we had two little babies and it was really, really hard because we were never able to catch up, we were always in debt, and it just happened so fast we were not expecting it.”
Three years later, she took a job at The Arizona Republic as a part-time clerk at the newspaper and eventually started her artisan column. She was still selling her artwork on the Internet.
In 2001, she started her Web site and within months was contacted by book editors, was featured in numerous publications and landed a contract with Walt Disney Studios to create media gifts for the premiere of the movie “Frida.”
Last year, Cano-Murillo was contacted by Target to include her jewelry in a limited-time promotion on the Web.
Invited to be a panelist at a Craft and Hobby Association conference last year, Cano-Murillo spoke about how artists can reach the Hispanic market. According to a study by the association, crafting is a $31.7 billion market in the United States, and, among Hispanics, half of those over the age of 18 make some sort of artwork.
Cano-Murillo emphasized in her presentation the need to let go of stereotypes, such as the idea that all Hispanics celebrate quinceañeras and speak Spanish.
At the conclusion of her presentation, several manufacturers approached her with offers to start her own line. Among them was Duncan Enterprises.
Rich Gartmann, vice president of merchandising for Michaels, said via e-mail that the stores selected Cano-Murillo because she already had a track record with her own business and many contacts in the Hispanic market.
“Her product is uniquely positioned to support the Hispanic market, yet Kathy’s market presence due to crafting blogs, radio and newspaper columns, positioned her with potential to a broader consumer base,” Gartmann said.
Cano-Murillo said she’s delighted to be at this point in her career. “I love it now because I feel like I’ve gone though the whole spectrum.”
FIND THE CRAFTS
Online
Check out Crafty Chica’s crafts advice at www.crafty chica.com.
Crafty Chica — Kathy Cano-Murillo — sells the art she and her husband make at www.chicano popart.com.
To purchase items from her new product line on the Web, visit www.duncancrafts. com/craftychica.
In stores
Or you can purchase her products at the following local Michaels stores:
• 1161 W. Irvington Road
• 7150 E. Broadway
• 3749 W. Ina Road 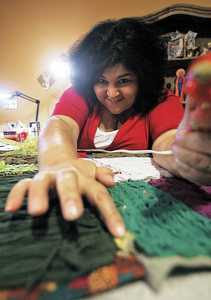