This week’s interview is with director Danny Boyle. Yes, that Danny Boyle – the Brit gent who made us squirm in our seats with films like Trainspotting and 28 Days Later. When I heard his new pic, Slumdog Millonaire, was an Indian love story, my first thought was “What?” I knew I had to see it. Not only did I catch an advance screening and love it, I also chatted with Boyle, 52, while he was in town on a promo tour.

Why he inspires me: Often the easiest route is to go with what you know best. After 20 years in the business, Boyle ditched that idea – and his comfort zone of England – to travel to India and make this movie. At one point while he was there, his distribution fell through. He stayed focused. The risk paid off. The gritty-yet-glittery tale about a lovestruck orphan who lands center stage on Who Wants to Be A Millionaire has already picked up several high-profile awards and has garnered Boyle some of the best reviews of his career. 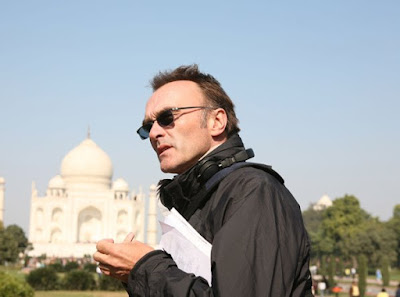 How did you come to direct it?
Danny Boyle: They they sent the script and my agent lazily described it to me as a kid who gets on India’s version of Who Wants To Be a Millionaire. I immediately thought, ‘How could I do that?’ But then I saw the writer’s name on it and it was the same guy who wrote The Full Monty, which I loved. I thought I at least better read 10 pages. I fell in love with it. I knew I had to do it. The simplicity of the story alone. The spine of the movie is the game show and it allows you to go anywhere. And the city it is set in is bursting with energy. It was irresistible. Naivety took over. I never thought, ‘Oh my gosh how will I make this appeal to America?’ or ‘How will I raise money? I just got lost in the story. I made it happen.

What were the biggest cultural differences?

I had never been to India before this. I threw myself into it. There is something about India that is similar to America in that everything there is wholehearted. You know, in Britain, we are quite cynical. India is very full-on. No half measures. I sensed that and lived up to it. I cast Indian actors, real Indian settings, the crew. They have no proper toilets there, not very good water, many of them are very poor, yet they are very dignified like you and me. They are very resourceful, their lives are bustling with energy, you are never bored there.

There is a strong sense of Bollywood style, did you plan it that way?

I watched a lot of Bollywood films. The whole feel of the place is soaked in Bollywood – not just the films. That is another connection to Americans, is their love of films. Everybody there watches movies, even seven-year-old kids. It seeps into everywhere. There are so many extremes in the city, so much melodrama. That is where Bollywood taste comes from. As soon as we got to India, I knew we had to have a big dance number in the film. We saved it for the end.

Did you learn any Bollywood moves?
I did. I can do the double basketball. Imagine you have a basketball in each hand and you are bouncing them simultaneously. As you do that, you move from side to side and pretend you are walking toward someone. Try it! That is a key Bollywood move. But make sure you get the head bobble right. It means yes and it means no, and everything in between as well. It’s fantastic.

How do you stay inspired between projects?
I tend to do one thing at a time. I don’t have anything lined up at the moment. I think that’s why India suited me. Most directors have three or four projects bubbling away, but I don’t do that. I get lost in one project for a long time and then all of a sudden one day I find myself on the other side of it and say, Oh no, I better get to work!

What are your favorite characters?
I like him or her to be against pretty big odds in an extreme situation. I like to give them a big task. I like them to be an underdog and to be determined. They follow their own path, they don’t follow the crowd. I relate to that and those are the scripts and characters I respond to.

What is something new you learned about yourself?
There is extreme poverty and wealth in Mumbai. There is no real separation like we have in the west. So there is this extraordinary balance. There are lots of contradictions that can’t be resolved. They think it is very western to want to resolve contradiction. It doesn’t work like that there. They just accept things as they are. I used to think that acceptance as your destiny made you passive. But in fact, it is liberating, it makes you calm when bad things happen.

If you could re-release one of your past films, which would it be?
(Laughs) I have a theory – it is controversial and provocative, really – that your first film is always your best. Even though you become more skilled as a director, it doesn’t make your storytelling any fresher. So I would vote for my first film, Shallow Grave.

Are you crafty at all?
Photography. Is that crafty? That is my love. We used a digital still camera, a Canon Ion 3, which has an 11 frame per second shooting rate. We used that imagery in the film. It creates a beautiful and intense effect. Oh, I know! I collect photography books. Here is a crafty vice of mine, I spend far too much money on those big photography books.

Do you mean photo albums?
Yes! All that stuff. My house is groaning under the weight of all those books!

I love the soundtrack, did you choose all those great songs?

I usually hand pick all the music for my films, but this time it was selected by one of India’s leading composers, AR Rahman. At first he told me the film reminded him of Shawshank Redemption. Isn’t that bizarre? I didn’t know what he meant! Anyway, we talked and he chose the music. Indian music is very interesting at the moment. There are a lot of influences pouring in from America, like pop, hip hop, and rap. And also house music from Europe. We have it all in the film.

Slumdog Millionaire opens today in Arizona, and is also playing in other markets around the country. Go see it! This Crafty Chica gives it four-out-of-five shiny sequins of approval!