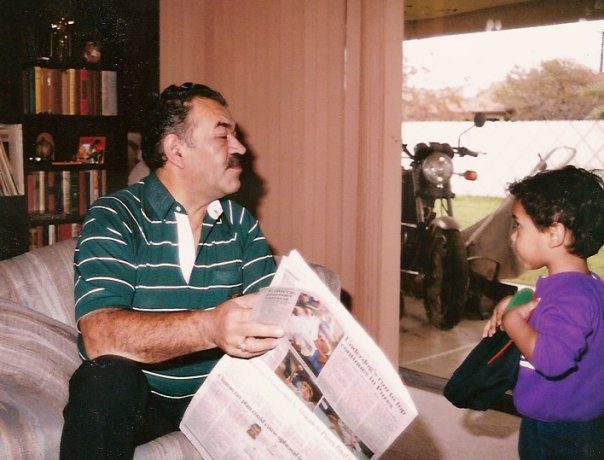 …only because there is so much to share! Let me just start by the days. The slide show is kind of in order of the events.

*Sorry of the below is not cohesive, I’m seeing double right now. Seriously. I lent my dad my reading glasses!*

My dad had been spending the days in the hospital keeping very busy, waiting for the next plan of action with his illness. In the picture above, you can see he had steady crowds visiting him every day and night. He had my sister bring his laptop where he stored hundreds of old family photos. He burned a special CD for each family member when they came to visit him. Yes, he was supposed to be resting, but he is NOT the kind of person to just sit in bed.

Wednesday arrived. It was my birthday. Maya and I went to see him. At the same time, the doctor came and let us know that my dad will need his leg amputated in order to safely remove cancer. Can I just take a moment to go outside and yell something in the middle of the street?

It was a huge shock. Above the friggin’ knee. Not only that news, but also that the surgery would take place the next day. Fast forward 24 hours. All of us were so emotional. We were with him in pre-op and he tells my brother:

“Wouldn’t it be a mess if they cut off the wrong leg and then I would have no legs at all?”

My brother: “Dad. That won’t happen.”

My brother: “Yes, it would be a mess. But it is not going to happen!”

Just then a nurse comes in, lifts up my dad’s gown and writes with a marker YES on the leg to go, and NO on the other. I swear, right then I saw a glowing halo around that marker. I asked the nurse and my dad if I could draw a heart on his leg before he went into surgery. They both said sure, so I drew a big heart and wrote “we love you”. I knew it was a permanent marker because when my tears fell on it, the ink didn’t smear. My dad broke the tension by saying, “Kathy, you want to keep the leg? Maybe you can decorate it with glitter or make something out of it!”

Off he went, and two hours later, the doctor came out and told us he did just fine. Today they moved him to a rehab center so he can get used to life with his new leg. It’s going to be a long road. Every step is a challenge, literally and figuratively. Thank you again for all your prayers, thoughts and kind words. I truly believe the collective good energy is working magic!

Friday, I bought my “chicamobile” – a 2005 PT Cruiser. It wasn’t my first choice, but I had exactly enough cash saved (no bank loan, yay!), it has low miles, low insurance, and it is in pristine condition. It’s black and super shiny. I can hardly wait to turn it into a Crafty Chica art car to drive around the city!

The same day, my new Amazon Kindle arrived via UPS. It is like an iPod for books!

Friday night I had a book signing at the city of Avondale’s Holiday Festival. This was special to me because my dad used to work for the city there, so I was able to meet and chat with some of his old friends. There were so many nice people – and some interesting ones too. This one lady asked me:

“Your maiden name is Cano?”

Her: “Me too. We must be related. Do you know Eddie Cano?”

Me: “My dad had a cousin named Eddie, but he passed away years – ”

Her: “This Eddie has twin sisters and is a PREE-son-ER.” (prisoner)

And THEN there was a pre-teen skateboarder kid who wanted a Crafty Chica bobblehead. I gave him one and he goes “Cool, I can practice my kissing on it in my bedroom!”

Yah, it was a hot night in Avondale!

Saturday was the Holiday Craftorama at the Duck. My friend Lolita helped pull it all together after my dad became ill and I didn’t have time. It was slower than our April event, but we still had shoppers and all the vendors had sales.

One of the highlights was literary performance artist, Tenisha Baca. She gave a spoken word presentation on knitting and crafting. She portrayed different characters who create for various reasons such as healing, peace, politics, fun, and even spirituality. She had us laughing and crying. As soon as she posts a video of her performance, I’ll post it here. Tenisha is the embodiment of indie crafting – she vocalizes her message, not only in what she makes, but in her performances. You just gotta see her!

That was all SaturDAY. Now on to SaturNIGHT. My Uncle Danny’s wedding! It was a full-blown Cano party. We were able to hang with all my cousins, we danced, yakked, and took lots of pictures. Afterward we went to the hospital and showed them to my dad and told him all about the night.

Can you believe I had one last event? Today. My cousin, Ray Arvizu, and his company, throws a huge tamale festival in downtown Phoenix every year. A big draw is a tamale-making contest. The contestants had to make the tamles right there under the tent! This year his PR department asked me to sit on the judging panel. There were 18 entries. They were all tasty, but some more than others. Some had carrots and potatoes, others strawberries and pineapples. I think one even had tongue! I took one bite from each one, except two from the ones I thought were bland. I wanted to give them a second chance. My highest score was 9.5 out of 10. My dad’s tamales are a 10, and while these were all mega-yummy, my dad’s still rock the hardest!

That was my last event for 2008. All my extra time in these next few weeks are about helping with my dad, and finishing my novel revisions. This was, by far, the busiest year I’ve ever had:

I am so happy I took so many pictures. I’m happy to have connected with all of YOU. Thank you for being so patient with me (ie: mailing prizes). Someday I’ll have an assistant and get some help. Until then, I’ll happily keep juggling all of it the best I can.

I feel so blessed and proud to have spent this year working for/with the crew at Duncan Enterprises – Valerie, Alyson, Lindy, Lauren, Cheryl, EVERYONE there!! I *heart* Fresno, it is such a quirky place with a lot of personality. I am so looking forward to 2009!

Alright, I’ll stop with the sappiness. It’s late and i’m ready to collapse on the bed from exhaustion.