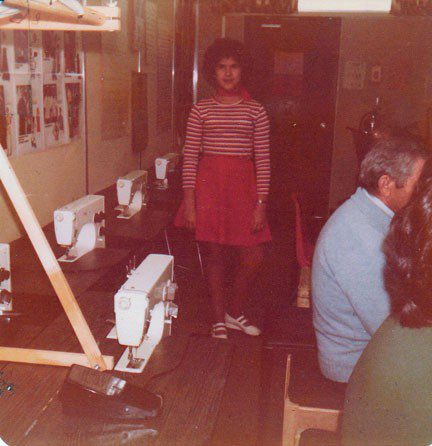 People often tell me they would love to craft but don’t know where to start. I’ve been there too, my peeps!

The photo of me in the skirt is the first thing I ever sewed. It was a simple skirt and I hated the process because I could not figure out the stupid pattern. I made it work, but would fend off needles and threads for the next two decades.

My crafty roots really began with markers. Those juicy felt tips were a comfort zone area because I didn’t have the confidence to draw, paint or sculpt. But give me a highlighter and a red fine point and I could decorate the heck out of bubble letters. I got so good at it, I even scored a gig doing nothing but drawing and coloring huge paper banners. My mega set of Pentels went with me everywhere – even Europe! I used them to decorate my postcards to friends and family!

Soon after, markers couldn’t fully represent my expanding creativity. I’d say this was around 1988. I wanted to really make something, and make it my own. Sure, I had dabbled in lots of other crafty projects, but I wanted to make and sell something that defined me and who i was as an artist. Soemthing to stand out. I knew I had it in me, but I had no idea where to start. Sewing? Painting? Beading?

Patrick, who was my best friend at the time, suggested I go to the craft store and survey all the materials. I killed two hours inspecting every product, trying to feel a connection. A tingle or spark. Anything that made me want to go home, get down and get busy. And then I saw it…

One minor glitch: I couldn’t find elastic cording because craft stores didn’t carry it yet. I opted for leather cording, but that stretched too much. Next, I tried Velcro. It worked! I had a hit! I used all kinds of colored beads and hung dangly charms off of my fancy new wrist cuffs. I made a hecka lot of those safety pin bracelets and sold them to boutiques all over the state. I couldn’t make them fast enough. My confidence soared.

Around that time, I helped Ojiji, a friend of mine and Patrick’s from Jamaica, organize an Arizona tour for his band, Messenjah. There were seven musicians in tow, all superstars in the reggae world. They were touring across the country to promote their latest album. They each sported long dreadlocks and considered them sacred. They believed the dreads were their body’s antennae to the energy in the universe.

Those two summer weeks were among the best in my life. Ojiji and the band took me in like a sister. They mini-schooled me in ital cooking, the music business, band promotion, and most important – the power of karma and practicing positivity. I admired Ojiji and Messenjah so much. They made a huge impact on my spirit and I wanted to return the favor with handmade gifts.

Thinking I was all clever, I took my safety pin bracelet idea and altered it into a dreadlock holder – a wide, beaded hairband. I used 2-inch pins and patterned bold stripes of red, yellow, and green (reggae colors). Each piece took me three hours to make. As I toured with the band from gig to gig, I secretly worked on the hairbands during rehearsals . They looked so stunning, I could hardly wait to present them!

I passed them out right before their last show on the tour. The band members gasped in delight and immediately attached them around their hair. They then took the stage in front of the sold-out crowd and performed a kick-butt set of tunes. I was so proud to see them rockin’ my wares. I fantasized about making Velcro safety pin dread holders for every reggae musician on the planet.

That would never happen, for Velcro and dreadlocks do not make kind company.

During Messenjah’s encore song, the Velcro straps separated on Ojiji’s new Kathy-made hairband. I didn’t make it long enough, and Ojiji’s dreads were just too plentiful. I watched in horror as his all his antennae-to-the-universe popped loose. The hairband, stuck to his head by the Velcro, swung back and forth as he swayed during the song. He tried to remove it all swift and ninja-like, but it wouldn’t budge.

He had to rrrrippp it away from his hair! One second earlier he was winking at the crowd, dancing and singing in the microphone. The next, he flashed me a look of “Help!”

After the show, I went backstage to check on the damage. My hands over my face, I walked in on the band members – all taking turns peeling off each others hair bands, which had all popped apart and stuck to their dreads, just like Ojiji’s. I could tell the guys were super-duper angry because the entire time they spoke in heavy run-on Jamaican patois sentences.

I wanted to cry, and would have, but my dear friend, Ojiji, told me everything would be alright, but I should ditch the whole Velcro-as-an-attachment concept. If the band was mad at me, they didn’t let on. When they saw me, they acted very gracious and kind. However, the next day when they each said goodbye to me, they added – “Beautiful artwork, thank you! But Velcro is no good!”

“Next time, I’ll color them a postcard with my Pentel markers,” I thought.

I’m sharing this story because this week I revisited the safety pin bracelet. I made three versions, but none of them looked like my original designs. I think the above-mentioned experience jinxed me!

I laughed the entire time thinking back to that summer. I feel like I’ve come so far. I’ve learned that there is no “one thing” or category or label that defines your style or who you are as an artist. It’s the big picture that defines you. Staying with it for the long haul. Having moments of glory, as well as crashing-and-burning. Those are what keep us humble and push us to try harder. Not just with crafting, but with anything in life!

Bottom line, if you want to get crafty, get on it! Don’t wait for the perfect idea to come to you, or the right kind of supplies. Try a little bit of each genre (yes, even a skirt!), and then stand back and look at all your work. Determine what unites all of them, find the common thread – that right there is your style!

By the way, Patrick and I have stayed in touch with Ojiji over the years, and he is still writing songs, singing and touring! You can see him in the following video as front man of Messenjah.

Enjoy! By the way, look for “Adventures in safety pins, Part Two” tomorrow!