I’m going to be featured in the New York Times this Sunday!

Now that’s what I call a Google News Alert! It’s Friday night, everyone is in bed and I decided to check my email (rare thing, right?). I had one. And it was a whopper!

Last month Rob Walker, a columnist from The New York Times, called me for an interview about my Crafty Chica product line. He told me he had watched my site grow over the years and was impressed at how I didn’t jump on trends, but instead just chugged along (my words, not his!) with my style of crafts and how staying true to what I loved led to all these amazing opportunities. I never looked at it that way, and the fact that he pointed it out made me all giddy…“OK, I like that!” I thought.

Rob is just the coolest guy ever, so easy to talk to. I love his column, Consumed, and his blog, Murketing. I’m impressed and appreciative of his passion for the DIY/indie craft movement.

Arghh…I can’t even type right now because I’m still hyperventilating from the excitement! I knew the article was coming out in this Sunday’s paper, but did not expect the Google News Alert.

Look – I even took a screen shot!

Here is a link to the column. There is no way I can go to sleep right now. Therefore I am heading into the art room to CRAFT!!!! Thank you, Rob!!! You’ve just inspired at least a gaztribillion more things for me to make and share! 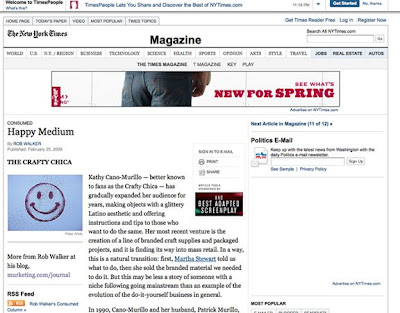 Kathy Cano-Murillo — better known to fans as the Crafty Chica — has gradually expanded her audience for years, making objects with a glittery Latino aesthetic and offering instructions and tips to those who want to do the same. Her most recent venture is the creation of a line of branded craft supplies and packaged projects, and it is finding its way into mass retail. In a way, this is a natural transition: first, Martha Stewart told us what to do, then she sold the branded material we needed to do it. But this may be less a story of someone with a niche following going mainstream than an example of the evolution of the do-it-yourself business in general.
In 1990, Cano-Murillo and her husband, Patrick Murillo, began collaborating on paintings and other items, using what she calls a Mexican Pop Art style: bright colors, skulls, saints and campy-vintage imagery. While they had some success, they also had trouble turning it into a sustainable business, and Cano-Murillo, who lives in Phoenix, took a part-time job in the production department of The Arizona Republic newspaper. She became a news clerk and later an entertainment writer. She resisted an assignment to do an “arts and crafts” column for the paper until she discovered the Web site Getcrafty.com, where a new and more youthful version of the D.I.Y. idea was taking shape; that was 1999. By the following year she wasn’t simply writing about the craft scene; she was part of it, starting her own CraftyChica.com site.
Cano-Murillo, who in conversation projects astonishing positivity, calls her entrepreneurial style “enthusiastic desperation.” This translates to a range of tactics to convert creativity into a business: selling handmade jewelry and various arty objects; publishing several how-to books (her latest, “Crafty Chica’s Guide to Artful Sewing,” is just out); and even offering a Crafty Chica cruise-ship package. Her product line — including Crafty Chica Glitter, Mojito Papers for use in scrapbooking or decoupage projects and the Love Shrine Workshop-in-a-Box — first appeared on the shelves of Michaels, the big-box craft-supplies chain, and a variety of independent shops last year. But the aesthetic of Crafty Chica and of much of the Web craft generation seems in some ways an odd fit for traditional craft retail. Cano-Murillo recalls searching a trade show for examples of “cool, Latino-centric” craft products just a few years ago and finding nothing more than jalapeño stickers and the like. (“Ooh, olé,” she says dryly.) But at the most recent Craft and Hobby Association convention and trade show in January, that decidedly mainstream organization made the “indie craft” movement a main focus, choosing Cano-Murillo as a success-story special guest on the subject. (Another featured guest was Jenny Hart, whose Sublime Stitching embroidery designs run more toward tattoo art than, say, floral patterns.)
Anecdotal reports have suggested that the business of crafting may not be suffering quite so much as the rest of the retail landscape in the current recession. But whatever the state of the economy, the Craft and Hobby Association is largely focused on expanding the sales of its mass-oriented member companies. (Alt-craft aside, the show also included a preview of craft products from, of all people, Paris Hilton.) And it’s fair to say that some indie crafters are skeptical about the attention. CraftyPod, an influential blog and podcast, noted with exasperation that the material at the show described new-wave crafters in the context of “the hippie generation.” Cano-Murillo is perhaps uniquely situated to bridge this craft gap. She’s widely known in the indie world and has built her own contact list of a few hundred indie stores. But last year she quit her newspaper job to work for Duncan Enterprises, maker of well-known craft products like Aleene’s Original Tacky Glue, and that move made it possible to approach big chains like Michaels and Jo-Ann Fabric and Craft. (She still writes her syndicated craft column.)
What Cano-Murillo seems to get is that if the mainstream D.I.Y. business considers the growing indie craft scene as a way to expand its market, then any given indie crafter can seize that attention to do the same thing. For her the point isn’t to become another Martha Stewart — it’s more the opposite of that. “Martha has always been an inspiration to me, in a weird way, because I cannot do her type of crafts, no matter how hard I try,” Cano-Murillo says. “So my thing has been embracing that I can’t do it — and celebrating my own style.” And now, it happens, she can do so in a mainstream retail setting.

More Articles in Magazine » A version of this article appeared in print on March 1, 2009, on page MM20 of the New York edition.