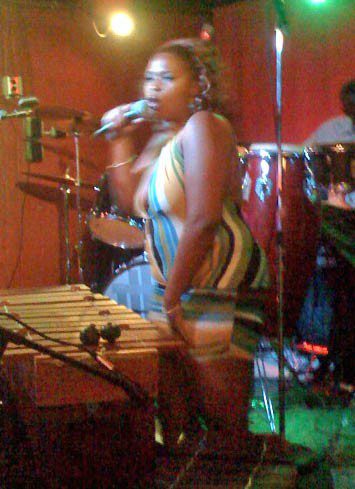 What time is it? Beer-thirty according to her. 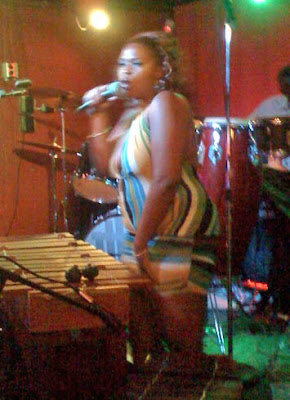 Thursday night I had my signing at Changing Hands in Tempe. It was going to be a tricky night because Patrick had a gig at the Sail Inn in Tempe. We decided he would go with me to my event and then we’d go together to his.

My book signing turned out great. An energetic, diverse crowd. Thank you to those of you who showed up! As soon as my signing ended, we packed up and practically flew over to the Sail Inn. Patrick rocked his solo set, and we decided to hang out and see the next act – a South African marimba group.

Now about the girl in the photo.

Someone bought Patrick a beer, but he didn’t have time to drink it right away because he needed to load his equipment in our car before the marimba band started. He set the beer down by me (I stood at the bar), asked me to “guard it”, and said he would be right back after he finished loading up. I leaned against the counter and scoped out the crowd. Just then, the girl in the photo comes up and our convo went like this:

She downed it in one chug, and then headed for the stage. She motioned to the marimba percussion player to join her. He appeared kinda confused, but they both climbed up. Like me, he didn’t dare refuse her demand. She grabbed the mic from the stand and began to say “Check. Check.”

At the same time, Patrick comes back, stands by me, and looks at his near-empty cup.

“What happened to my beer?” he says, shocked, bummed and mad all rolled into one.

“She made me pour it in her cup!” I said, pointing to the stage.

“WHO???” he asks, as we both turn and look – right at that moment she breaks out with a full-on rap! I mean, just out of nowhere, she took the floor and did her thang. She wasn’t half bad. If she had a proper back-up band and set up, she would have sounded more legit. After she finished, pulled down the snug hem of her super short polyester dress while the crowd offered a weak clap. The air felt a teeny bit awkward. She stepped off the stage, careful, so she wouldn’t topple over in her tall metallic heels and strutted back to the bar. She tried to act all cool, but I knew her heart was racing.

She glanced over at Patrick and myself.

“Hey girl, you drank my beer!” Patrick hollered to her. “…but it’s cool because you did a good job up there…” I supported his statement by giving her two enthusiastic thumbs up!! (NOTE: Um, two thumbs up to a brickhouse chica who just threw down some rhymes? Ugh, I hate my corniness!).

Talk about courage on her part! I’ll admit, at first she kinda scared me when she made me give up the suds, but that vibe vanished and was replaced by admiration. Don’t you ever wish you could have the guts to do something like that? Just hop up on stage and belt out a song in front of a club full of strangers?

“Thanks,” she replied, slightly dejected. “Hey – if you liked it, buy me a beer!”

We laughed and bought her a round. She downed it just as her taxi pulled up. She went to leave and then stopped, turned and mini-jogged back to me. She gave me a huge hug and a kiss on my cheek. “Thank you,” she said. And she left. I never even learned her name! But the experience added to the already memorable night. Her impromptu gig made a great me think about a video I watched on my friend Stacy’s Facebook page earlier in the day. It’s about facing your fears head on!

Whether you want to enter your designs or writing in a contest, or sing in front of strangers – go for it! At least you can say you tried, right? Oh, and the beer hijacking is optional.

Here is the link in case you can’t see the video.

P.S. My dad is walking around on his new leg and even started driving again! Yay!!!