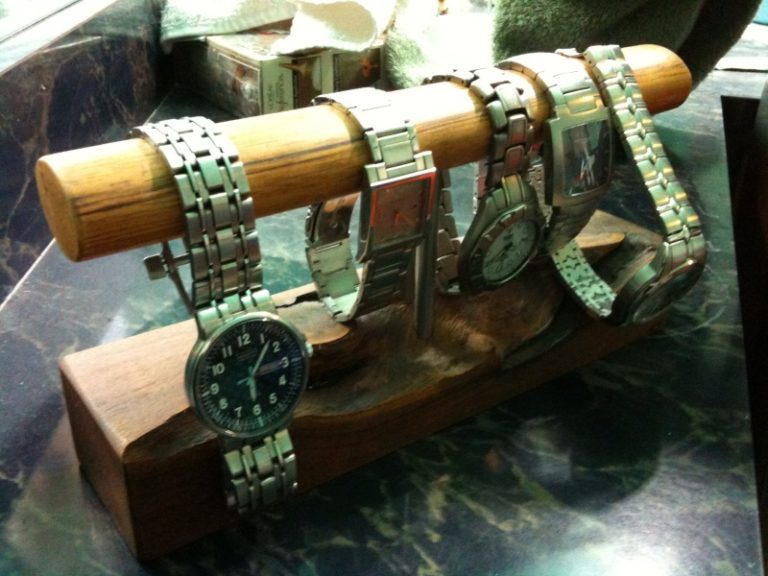 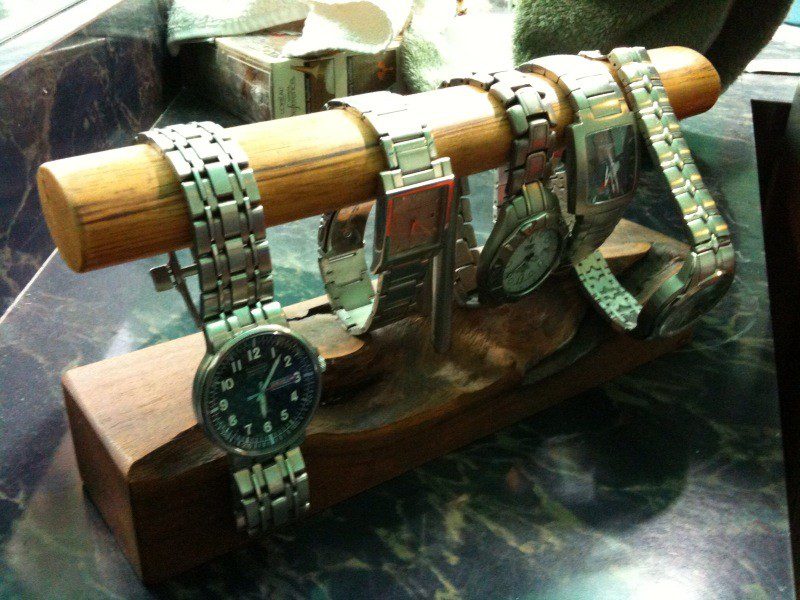 This is one of my dad’s last projects he made. After he came home from the hospital last winter, he passed the time organizing and making things. He loved wristwatches, he collected them from all over the world. He often bought all the findings and built his own custom wristwatches. In his later years, he just bought nice ones that caught his eye. Months ago, he made this watch bar for them. He said the watches would die if he covered them, or put them in a drawer. He wanted a holder to display them upright.

The bottom part is a piece of mesquite wood. He drilled two holes and inserted steel bars. He then took a hammer from his tool chest, removed the head portion, smoothed the ends – and there you have the bar to hold the watches!

When Patrick first saw it, he goes, “Hey, that is a Mantastic craft!”

Tonight my mom gave each of us kids (DeAngelo & Maya too!) a watch to wear and remember him by. It helps.

Here is my dad’s obit that runs in the newspaper and online today. We all wrote it together:

David O. Cano, 72, passed away in his sleep on Tuesday, July 14th after a long and brave battle with cancer. Born in Phoenix, Arizona on February 8th, 1937, he led a rich life of accomplishment and love. His warm smile, mischievous laugh and his famous stories will be greatly missed by his loving family which includes numerous nieces, nephews, in-laws, cousins, co-workers and the many friends he made in his life. As a teen, he won top awards in The Fisher Body Craftsman’s Guild, a national auto design competition. He served in the Air National Guard as an aircraft electronics technician. In his career as a civil engineer, he led many infrastructure improvement district efforts that helped to support the growth of Phoenix during the 1980’s. He retired from the city of Phoenix after 33 years and then worked an additional 7 years for the City of Avondale as a project manager. He was a consummate hobbyist, able to fix or conquer any task given to him. He was also known for his red chili tamales, which received national acclaim when he was profiled in Better Homes and Gardens Magazine. He is survived by his wife of 47 years, Norma Jean Cano, his children, David A. Cano (Michelle), Kathy Cano-Murillo (Patrick) , Theresa Cano, his two grandchildren DeAngelo and Maya Murillo and his two doggies that loved him dearly Lola and Rocco. The eldest son of Joseph and Eleanor Cano, he is survived by his siblings Joe, Nick, Charlie, Danny, Mitzi and James. A visitation will be held on Thursday July 16, 2009 from 6:00-8:00PM with a Rosary at 7:00PM at Paradise Sunset Chapel Funeral Home at 3934 E Indian School Rd. A funeral Mass will be celebrated at 9:00AM, Friday July 17, 2009 at St. Mary’s Basilica 231 North 3rd Street Phoenix. Burial services will take place at St. Francis Cemetery located at 2033 N 48th St, Phoenix.

P.S. I don’t mean to have my blog be a downer this week. I’ve been posting since 2003, and I post about everything, all that is in my heart and on my mind. I promise to get back to crafts-as-usual later this week. Thank you for understanding.