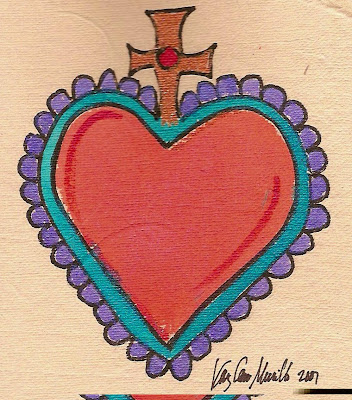 When I was in high school, working on the newspaper staff, I had one goal for when I “grew up” and that was to be a features reporter for The Arizona Republic. I feel very blessed that I fulfilled that goal.

It breaks my heart that this week The Arizona Republic is having another round of lay-offs. As we all know the newspaper industry is being hit very hard during these tough economic times. I spent 13 years at The Republic as an employee and those days shaped who I am today. My editors, my co-workers, the photographers, designers, copy editors, the people I interviewed, the ad reps, the clerks, even the PR folks who pitched stories! My sister works there too!

I’m sending lots of love and good energy to everyone there, I know it is going to be a hard week. And for anyone else out there who is on shaky ground for any reason, here are some words from Maya Angelou to help shine some light your way:

– “I’ve learned that no matter what happens, or how bad it seems today, life does go on, and it will be better tomorrow.

– I’ve learned that you can tell a lot about a person by the way he/she handles these three things: a rainy day, lost luggage, and tangled Christmas tree lights.”

– “I’ve learned that regardless of your relationship with your parents, you’ll miss them when they’re gone from your life.

– “I’ve learned that making a “living” is not the same thing as “making a life.”

– “I’ve learned that life sometimes gives you a second chance.

– “I’ve learned that you shouldn’t go through life with a catcher’s mitt on both hands; you need to be able to throw some things back.”

– “I’ve learned that when ever I decide something with an open heart, I usually make the right decision.”

– “I’ve learned that every day you should reach out and touch someone. People love a warm hug, or just a friendly pat on the back.”

– “I’ve learned that I still have a lot to learn.”

– I’ve learned it feels good to look people in the eye, letting them know that you are acknowledging their presence. It lets them know their words mean something.

– I’ve learned the things I started off hating in my life, are the things I end up loving the most. That you have to go through the roughness of the sand to become diamond smooth.

– I’ve learned that it’s worth it to ask, even if it seems “out of the question”. You’d be surprised at the result!

– I’ve learned if you knowingly do something dishonest or intentionally cruel, you WILL have bad karma, right where it hurts you the most!

– I’ve learned that the pain in my chest isn’t a heart attack, it’s gas. It’s another chance to change to a healthy lifestyle before it really is a heart attack!

– I’ve learned there is beauty in everything. It takes a special person to look beyond the obvious to find it.

– I’ve learned my kids will remember everything I do and say and then tell me about it in front of everyone at Thanksgiving dinner (or on live TV) 20 years from now.

– I’ve learned to act on your dreams as soon as you think of them, or time will fly by. The sooner you open yourself up for opportunities, the sooner they will come your way.

– I’ve learned it makes you a better person if you live each day as if it were your last. Go to bed with a clear conscience, tie up loose ends, show affection.

– I’ve learned that most desserts really are the same thing – refined sugar in different forms. But it’s still fun to splurge on the good stuff now and then.