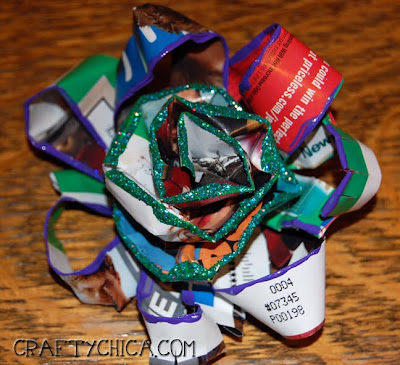 I was playing around with magazine pages recently and decided to make a flower pin. I first cut strips 1-inch by 4-inch, folded them in half lengthwise and then looped them to make bow-like pedals. I glued them together in a circle. Next, I rolled up a strip and made a rosette for the center and glued that down. I trimmed the edges in Crafty Chica paint, and then added some Bollywood Blue glitter for good measure.

I wasn’t sure if this was a success or not. I liked it, but I was worried it looked too crafty. But I liked it and thought I’d show it off! I wore it to CHA last month and everywhere I went, people commented on it and asked for a blog tutorial. I’ll post step-by-step pictures soon, but here is a picture – a little beat up after wearing it for several days, but it has held up pretty well, I guess!