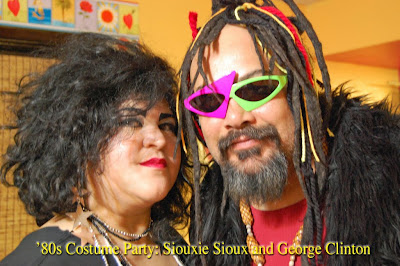 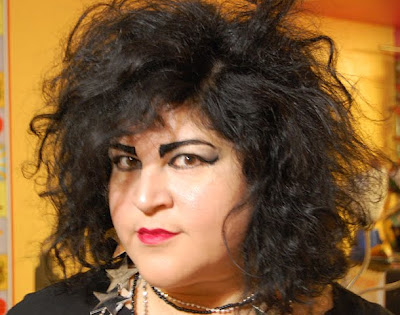 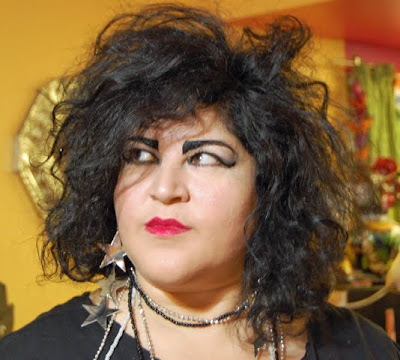 We went to an ’80s costume party last night and had fun pulling together our outfits.

I went as Siouxsie Sioux (of Siouxsie and the Banshees) and Patrick went as George Clinton.

We didn’t spend more than $20 bucks on our wares. It is actually kinda scary that we have all this stuff on hand…

I met Patrick in 1984. Our relationship was founded in the 80s, so as we got ready all these memories came flooding back…music has always been a foundation in both our lives and it is what brought us together!

Back in the ’80s, I never dressed like Cyndi Lauper. In 1982, right out of high school, I took my first trip to London and came back a changed person. My whole life revolved around Brit rock and style. I loved New Wave and always sported black and white checkered clothing with little round music pins. In 1984 I went back except this time our group started in England and worked our way through Greece.

When I returned that time, I scoured thrift stores and spent my paychecks on vintage clothes from the 40s and 50s. We didn’t have Forever 21 back then, all we had was Contempo Casual and they sucked for cool clothes! As far as recreation outside of school, all my friends were in bands and I used to sneak into bars to hear them play.

Patrick grew up as a big fan of George Clinton and Prince in the ’80s. Patrick used to wear pachuco suits and drive a 48 Chevy. He thought he was all bad, Mr. Vato Loco. It surprised me that he took an interest in being my friend. We lived five minutes away from eachother, we were into different worlds. He thought I was trying to distance myself from being a Chicana (I was at the time, I hate stereotypes!) and I felt he was walking around with a sign on his sleeve. We used to argue about all of this as we carpooled to work at the Phoenix traffic court.

I remember one day rolling my eyes at him, telling him to open his mind and then dragging him out that night to a (now closed) Phoenix club called The Metro to see Bad Brains and Fishbone. Little did we know that many years later, Patrick would go on to grow dreadlocks and even be the opening act for HR (leader from Bad Brains) at a concert. He in turn, told me to open my mind and turned me on to lowrider oldies like Rose Royce and Ralphi Pagan.

By 1988, we both discovered our love for reggae music and that sealed the deal. Patrick took a trip to Jamaica and came back saying he was going to quit work, grow dreadlocks and start a band. I clapped my hands and said “I’ll be your manager!”

Seeing us dressed as Siouxsie and George last night reminded me of all this. Hope you don’t mind me sharing! (Here is a Ralphi Pagan song that Patrick used to play in his car as we drove around town).