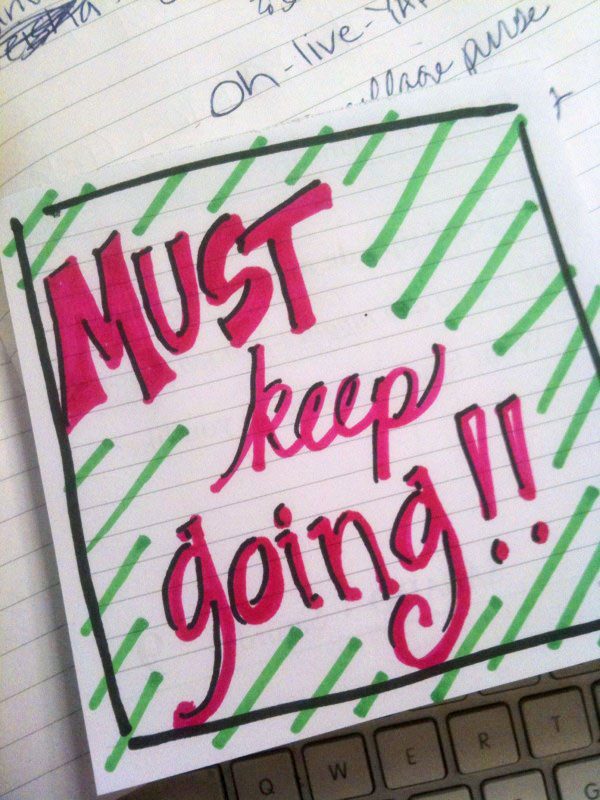 Checking in (and contest winner)

Hi-dee-ho! I’ve been a writing machine this past week, and wanted to pop in to say hi. Really, I’m just procrastinating for a few minutes. I can’t stay for too long because it’s only 8 p.m. and I want to get in another 2,500 words by the night.

I’m moving right along with this new novel. It’s so much fun. I have my outline at my side, but as the story unfolds, some of the characters are like, “Hey, I don’t want to do that, I want to do…THIS!” and then the story zooms around a corner I didn’t see before.

It’s been very hard though. Every time I start a new chapter, I have to take a deep breath and regroup. Each one is a mini-story with a beginning, a middle, and an end. Sights, sounds, settings, etc. And the content must move the plot along. I realized I have one chapter that doesn’t. But I’m not going to fudge with it now. I have to get the entire draft done.

The other day I had a mini-meltdown and wanted to quit. For a solid day, I cried on the bed, doubting myself. Now that I look back, it was totally stupid because all I did was waste time. My deadline is fast approaching, I know I’m going to finish, why did I waste those precious hours? I could have been that much more along. One of my Facebook friends left me a comment that said “Just throw up your story, get it all out – and then go back and clean it up!” It sounds gory, but she is right. Every time I get stuck on trying to find the right action phrase, I remind myself “just throw up the story! Clean it up later!” I picture this first drafts as the frame of the house, the drywall and maybe the electricity and plumbing. After that I’ll start from the top and decorate and edit.

Oh, one other crazy thing. I’ve been drinking a lot of Starbucks VIA instant coffee. Good stuff. But I tired of the liquid, and I decided to try and taste the powder on my tongue. I think sitting alone at the computer for hours writing is making me way loca. The idea came so fast. I did it and yes, it was bitter. But it dissolved fast and hit me with an intense caffeine rush. I do not condone this at all, I wish I hadn’t done it. I thought I was going to fall over, my heart was beating so fast. Go ahead and cyber hit me, I deserve it. It was then I took a break and went outside for a walk. Ahhh…fresh air. I haven’t had much coffee since.

Saturday morning I spent with my craft group, The Phoenix Fridas. We are going to have a new exhibit up in March at the downtown Tempe post office. We each get a full window display to decorate!

Tomorrow is the last day of my working vacation and I’m spending it crafting. The break will do me good. I’m making some fantastic projects for an A-list actress/comedian/best-selling author! I can’t reveal the deets until months from now, but trust me, it’s way cool!

At the end of this week is an important Crafty Chica meeting taking place in another state. I have everyone from my Nana to our doggies reciting novenas for me! Send good wishes, por favor!

I cannot believe that next week is already CHA! Look over to the right hand column to see the different booths that I’ll be at. I’m starting a new eating plan tomorrow, so hopefully I’ll be a bit lighter. It’s hard to be chubby and travel. Life should be about having enjoyable experiences and it is not enjoyable when your seatbelt is sucking the life out of you. I’m more excited about this show than any other. I always say that, but this time I’m debuting my novel there. The first CHA I went to was two months after I finished the first draft of my debut novel. Back then it was called The Crafty Chica Chronicles. I like Waking Up in the Land of Glitter so much better! Never in a million years did I think it would be published, much less that I’d be on a stage at CHA reading an except. OK — starting to freak out, must change subject!

The fabulous Dave Lowe is working on my book trailer, and I’m also putting together a second trailer as well. I can’t believe the book comes out in less than eight weeks. At first it felt like forever, now it feels close enough to poke with my finger. As far as my next craft book proposal, still haven’t heard back about its future. Fingers still crossed on that too!

Oh! I saw The Lovely Bones last week, such a great film. I bet it will have naysayers, but I was really moved. Maya read the book and liked it better, but said she liked the movie for different reasons.

Hmmm…what else is there? Don’t forget about the Crafty Chica Cruise, we still have some spots left!

and MICHAELS! If you visit one of these stores, will you send me a picture of the display? And don’t forget to let me know if you use any Chica products, I’ll feature you on my blog!