When I first heard about The Karate Kid remake, I rolled my eyes like everyone else who experienced the 1984 version. I scoffed and said “Noooo….! How could that movie studio even think of doing that?”

But then I remembered feeling the same way about the Freaky Friday remake. And Pride and Prejudice. And Dawn of the Dead. And Star Trek. I gave two thumbs up to those do-overs.

I know nothing will ever match our favorite original films, but I try not to dismiss the remakes (operative word: try). Plus there is that whole aesthetic atrophy thing that I refuse to fall victim to. I strive to keep an open mind and give new things a chance.

DeAngelo and I went tonight to check it out. I didn’t have high or low expectations, but my curious-needle was poking in the red zone. I knew from the first ten minutes I was going to love it. Sure enough, I cried three times and cheered at the end. I’m such a softie!

It’s a bit darker than the original. We see little Dre (Smith) take some heavy blows from the local bully. As a mom, this was painful to watch. The movie is also much longer than its predecessor, running time is two hours and twenty minutes. It’s worth it. Just like the original, The Karate Kid is a gem for kids (and kids-at-heart) because it has sincere messages about friendship, honor, facing fear, and self-determination – without being overly corny. They could have skipped a lot of this to make it a straight action film, but chose to add little comedic nuances that make the story sparkle.

My only complaint is they should have retitled it The Kung Fu Kid to give it its own signature brand. Karate has nothing to do with the story!

Bottom line? It’s a fun summer popcorn flick. Ralph Macchio and Jaden Smith will make a nice DVD double feature for the family down the road. Hey, that reminds me. Wonder why they didn’t give Ralph a cameo?

And to all the haters who haven’t even seen it yet: Don’t judge! Go see it on its own merit without comparing. I think Pat Morita is smiling in Heaven because this movie will inspire parents to have their kids see the original!

– There is a beautiful scene of a Chinese shadow puppet show.
– Look for the awfully cool beaded curtains at Mr. Han’s house.
– There is another scene a school stage where they have props set up for a play. There is a colorful paper lantern/beaded chandelier thing. I want to see the movie again just to get a closer look because I want to make one! 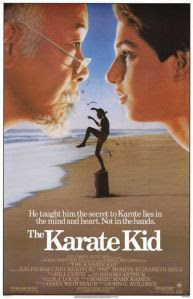 1 thought on “The Karate Kid”