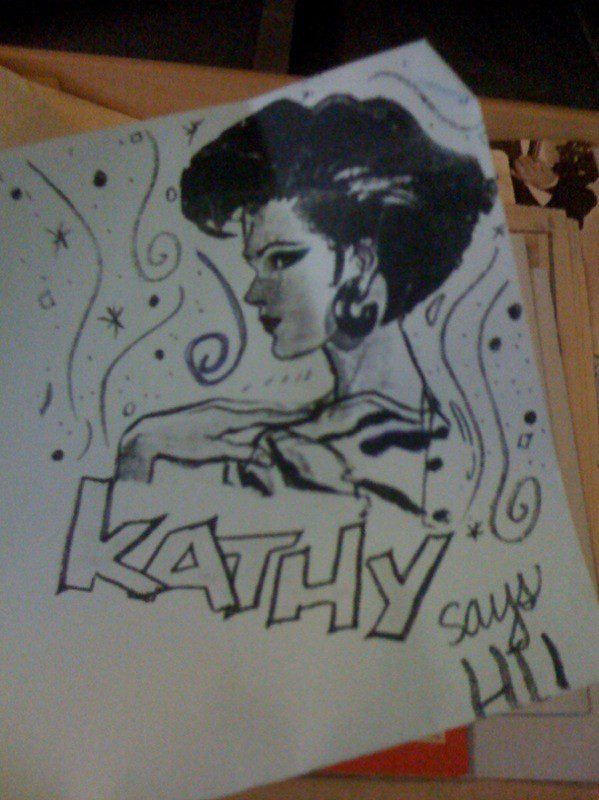 (my early craftiness, circa 1984. I used to have this haircut back then!)

My sister came across one of my early craft projects, stationery! I made this when I worked as the appeals clerk for traffic court. We’re talking 1984 office supplies, folks. No glue sticks or computer graphics here.

Side note: I used to be a bailiff’s assistant, but was “promoted” to appeals clerk.

Here’s how it worked: When a defendant lost their case and felt wronged by the judge, they would head straight to the appeals counter, fuming mad. They would walk up, slam their hand on the bell and take out all their agression on the poor appeals clerk, who stood behind a bulletproof window. The appeals clerk would have to listen to the rant, and then inform the person that to proceed, they would have to pay $9 and fill out a bunch of forms and wait three months to be called back to court. After that, said clerk had to listen to more ranting about just losing a case and then having to pay money, yadda, yadda, yadda. Needless to say, the appeals clerk position had a high turnover rate because no one could handle the job.

And then I came along.

I was informed that because I “smiled so much and was always so happy!,” the court administrator thought I would be the perfect person for the job. I embraced it, I loved a challenge.

I made it a goal to have each angry person leave with a better perspective. These people just wanted someone to listen to their story. 7 out of 10 times they calmed down after they finished. I would tell them I was sorry that happened to them.

The hardest cases to fight were radar speeding citations, because the officers used calibrated machinery. There was no way a defendant could prove they were not speeding against that. I was advised to inform defendants of this as a courtesy so they wouldn’t waste their money or time. I did as instructed and offered them a treat from the candy dish that I would show them from behind the bulletproof window, and they would point to the one they wanted and I slid it through where we were to pass the forms. They’d take the candy, thank me, apologize for their bad attitude and then I’d direct them to the cashier so they could pay their fine. I’d go back to my desk and make office crafts (more on that in a bit)until the next person rang the bell.

Side note #2: The high point of this experience was when this mean dude – stereotypical jock – from my high school came to file an appeal. He used to taunt me so much in the hallways between classes. He would walk by, bump me and stare into my eyes with a snide glare until I looked away. He’d make rude comments about my curly hair, my chubbiness, and tell me that he and his friends had dubbed me “Wilhelmina.”

So one day, three years after we graduated, there he was at my appeals window, ringing the bell. I recognized him right away. At first I wanted to be rude, or even hide behind the door to make him wait a really long time for service, but I had become more confident since high school. I had to set the standard of what an appeals clerk should be! I took his paperwork: Radar speeding ticket.

Just as I was about to tell him my bubbly and polite spiel about the calibrated machinery, his gaze locked with mine and he recognized me too. His whole expression changed to that of impressed shock. That was because this time, I was a size four with curves packaged in a tight dress with high heels and flat-ironed hair to match. His expression changed yet again, this time into a slimy grin. He made a comment about my chi-chis and asked me out. He winked at me in a super cocky way, as if I wouldn’t be able to resist him. I just about barfed.

I ignored his comments and convinced him to file the appeal.

Woooo-hooo! He was out a hefty $9 because of me. Life crushing! You now know the dark side of Kathy! Yah, that’s about how sinister I get. Even at 21, I knew about the laws of karma. I figured he’d get a wake-up call to change his ways sooner or later.

Anyway, back to the craft!!! While working as the appeals clerk, I had down time. Hello, office crafts!

I worked some old school cut and paste magic, and then doodled with felt markers and made a master sheet, which I then took to the secretary’s Xerox machine and ran off two-up stacks of goldenrod, rose, and seagreen copies. I cut them on the ginormous paper cutter and then stacked and coated the top edges with rubber cement. I put the appeals handbook on top of the stack to weigh it down on my desk until it dried.

The next day, I had a thick fancy notepad! I used my special stationery for all interoffice correspondance. Doesn’t it look so professional? Even though it was personalized, it was still used for work purposes!

Here is how to make your own:

Aleene’s Tacky Glue Stick (this is the updated version, okay?)

Directions: Glue down the image and doodle designs around it. Don’t forget to draw your name in fancy lettering! Use the tape to seal down the edges of the image you pasted so the shadow lines don’t show. Make two copies, reduced 50%. Glue them down on one sheet of paper, so you have two up. Tape down the edges again. Make a gazillion copies. Cut them in half and arrange in neat stacks. Set a heavy book on top of the stacks, and apply rubber cement to the top. Let dry.

Thank you, Theresa, for finding a sheet of my special stationery, it brought back a lot of cheery memories!

Have you ever made an office craft? Please share!

P.S. Wouldn’t the mean guy story make a great plot for a novel or movie? Say he really likes the girl now, but she hates him and he has to redeem himself after what he did to her in high school. It’s hopeless, she wants nothing to do with him, until a chain of events take place that makes her see him in a different light…wait. Is there already a movie like this??