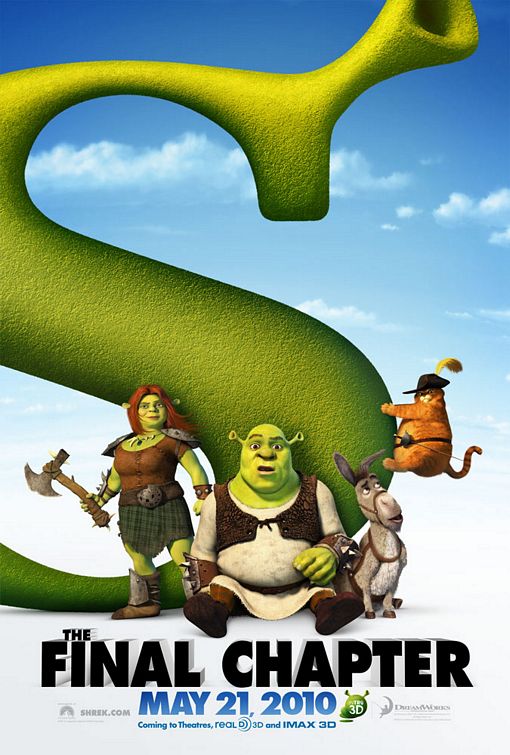 Shrek Forever After & Sex and the City 2

This weekend I splurged and went to two movies in two days: Shrek Forever After and Sex and the City 2.

Shrek Forever After – I 100% enjoyed! I don’t mind “franchise” films as long as they are good. This one qualified. Shrek, bored with married life and parenthood, escapes for what he thinks is a day to go back to his old life as a cranky ogre. A conniving Rumpelstiltskin provides that favor – with a catch. There’s a bit of a It’s A Wonderful Life spin as Shrek goes into an alternate universe where his friends don’t recognize him. By the time our favorite jolly green giant realizes his mistake and yearns for his former domesticated life, the damage has been done: Fiona doesn’t love him anymore! *Clenches hand to chest*
Like with the other three Shrek films, there are plenty of laughs, gross out moments and even a few tears. I’m already clearing a spot on my shelf for the DVD. Even though the studio has called this the final chapter, I hope there is a fifth Shrek that centers around the adorable triplets are teenagers. Couldn’t you see baby Felicia grown up and finding herself with the same curse that Fiona once had?
One of my favorite lines:
“Are my babies cute or do they make people feel uncomfortable?”
– Donkey, after learning he is the daddy of dragon-donkey mutant babies.

Next is SATC. I’m a diehard fan from the HBO series and loved the first film. Overall, this one didn’t deliver for me.
Carrie, bored with married life, escapes for what she thinks is a week’s vacation to Abu Dhabi…hey – this is sounding like Shrek Forever After! Okay, I’ll be serious. I know it is meant to be a frou-frou escapism experience, but the original SATC was more than that, as well as the first feature film. The series was always grounded in friendship and relationships, everything else (yes, the fashion and sex) was secondary.
This sequel felt like one big crazy costume and the characters were lost inside the sleeves. I didn’t connect with Carrie’s problems about Big. She became upset because he wanted to put his feet on the new couch, eat in once in a while, and gasp! – wanted to watch black and white films together on a new flat screen TV he bought her. What a horrible husband! Charlotte, Miranda and Samantha’s subplots were just as threadbare.
I wish the writers had been more creative. Like, maybe Big loses all his money and the couple has to downsize to Carrie’s former apartment and share her closet. And she has to chose him or her clothes in order to learn the true leaning of love…okay maybe not that, but just something meatier so she wouldn’t come off so shallow. That’s not the Carrie Bradshaw I know and love!
Was SATC 2 a bomb? No, not at all. It is what it is: a fluffy chick flick. As long as you accept that and don’t compare it to the original series, all is well. And hey, Aidan pops in! That alone was worth the admission price!
Love & light,