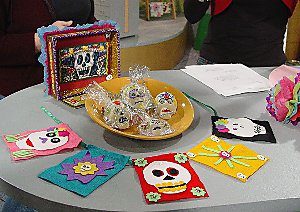 Day of the Dead is a Mexican tradition combining Aztec and Roman Catholic practices and beliefs that date back many centuries. It is believed that on Nov. 1 and 2 the souls of our loved ones who have passed away are able to return to their homes and visit with friends and family.
Relatives prepare for their arrival with joy and respect. One way is to build a beautiful ofrenda (altar) in honor of the departed.

This festive skull banner will add a happy touch to your ofrenda.

Supplies
4 sheets of felt, 2 black and 2 white, each measuring 9 by 12 inches
Assorted sheets of other colors of felt
Skull template (see below)
Scissors
White craft glue or hot-glue gun
1 strand of thin ribbon, 24″ long
Optional: Embroidery thread and needle, sequins, felt flowers, fringe, buttons
Directions
Cut each sheet of felt into four pieces. Pull out eight pieces in assorted colors to use as your background and set aside. Take eight white pieces and, one by one, lay the template on top and cut around it to create the skull shape.
Take a colored background piece and glue the skull in the center. Take a piece of black felt and cut two circles for the eyes, a triangle for the nose and pieces for the mouth/teeth. Glue them in place on the skull.
Apply flowers, sequins, etc., as desired. Let dry. Continue with the remaining seven background pieces. Mix up the facial features to give your banner personality – use red felt to create lips, or make eyelashes, for example. Use embroidery thread to stitch on designs or add buttons.
Arrange the pieces in a row, and then carefully flip them all over, back side up. Add a line of glue along the top edge of each piece and press the ribbon in place across all of them to connect them, leaving a “tail” on each end for hanging.
Variations: Alternate pieces with different layouts that you can create by using the scissors – such as letters, hearts and flowers.