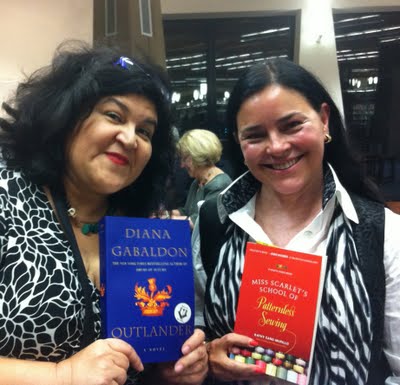 Last Friday I had an event that I had been looking forward to for months. I was invited to be on an author panel for the Scottsdale Public Library’s annual fundraiser.

Wouldn’t you know, our car was on the fritz. My mother-in-law lent me her Kia, but Mapquest failed me and I got lost. I did arrive right on time – in the parking garage. I had to hoof it up three flights of stairs. As I entered the library all sweaty and out of breath, a young man rushed me to the front of the room at the main stage – and sat me next to Diana Gabaldon!

My heart raced, I’m a huge fan. Next, I noticed cocktail attire. I had been so busy with my crafty work projects, I didn’t think to dress up. I’m talking jeans and frizzy hair.

The mayor of Scottsdale stood up and made an empowering speech. All the attendees were there to show Scottsdale pride and support their majestic city. Next, the president of the organization made the introductions and requested that each of us to go up and tell a bit about our book.

When my turn came, I was still flustered. Sweaty palms. Stimulation overload! No excuse – I know, but it was what it was, ok? I walked up to the podium and exhaled. Cool. You see, something comes over me when it comes to public speaking. I turn into a different person. I’ve had more than a hundred speaking engagements over the years. No worries. Therefore, I channeled last week’s kick-butt signing in downtown Glendale. I felt empowered!

I scanned the crowd and smiled bright. “Thank you for having me, I’m very honored to be here! My new book is titled Miss Scarlet’s School of Patternless Sewing and it takes place in downtown Glendale!” I chirped.

“Power to the 623!” I cheered, as I pumped my chubby fist high in the air, like a Chicana activist or something. Where that came from, I HAVE NO IDEA! I haven’t pumped my fist in the air like that since high school when I saw Heart in concert.

“Aw, crap.” I said in my head. 623 is the area code for Glendale.  I was at a Scottsdale fundraiser. I knew that. It’s like the equivalent of a band yelling out “Yay, Vegas!” in Phoenix. I had to think fast before I got booed off the stage by fancy folks in high heels and business suits….

What did I do as a remedy?

I pumped my fist in the air a second time and shouted “AND… power to the four-eight-oooooh!” (Scottsdale’s area code)

A couple people seemed to nod with approval, a few giggled, making me feel a bit relieved. But then I worried about Phoenix peeps in the crowd – I’m a middle child who aims to please – I didn’t want them to feel left out.

I moved on to the plot of my book, and the rest of the speech flowed smoothly. I signed a lot of books and met so many fabulous peeps, like Diana Gabaldon, Dr. Connie Mariano, Donis Casey, Marcia Fine and Rico Austin.

Despite my goofy moment on the mic, everyone made me feel welcome, beautiful, accepted and happy. I really appreciated that – especially considering that later in the evening I discovered a huge green paint smear on that same fist I pumped in the air three times!

UPDATE: I guess I didn’t do too bad, I got hired for three more speaking events off of this one!

OK, have you ever had a speech fail? Please share in the comments! I’ll choose one name to win a set of my two novels!