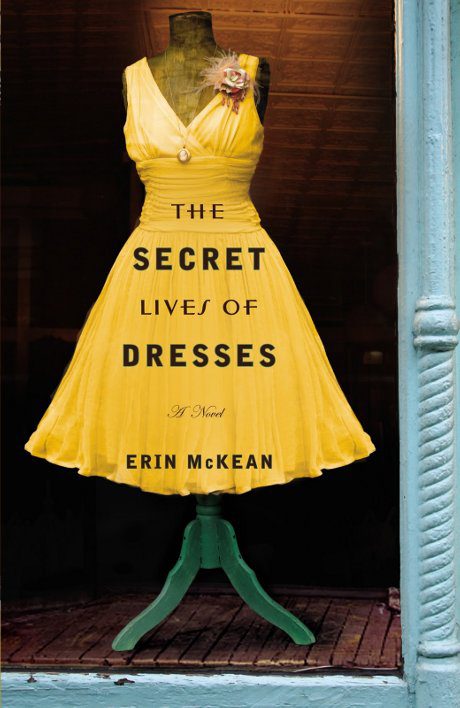 Review for ChicaWriter.com by Amy Byrne of Random Acts of Amy.  Short link to review on her blog: http://wp.me/p1z34D-W
The Secret Lives of Dresses by Erin McKean is the story of a woman’s internal journey to find herself, after being adrift for most of her life.
Dora Winston is walking through her life with no discernible goal for her future. She’s in college on a scholarship, but, although she’s close to graduation, she doesn’t have a major. She figures she’ll go to graduate school…it’s as good a choice for a next step as any. Plus, it has the added advantage of Gary. Gary is her boss at the campus coffee shop where she works, and Dora has a major crush on him. Gary says he’s not allowed to date underclassmen, so Dora bides her time until she will be a graduate student, and free to date Gary. Meanwhile, she watches Gary move from girl to girl.
Tragedy strikes when her grandmother, Mimi, has a stroke, and is in a coma with not much hope. Mimi raised Dora as her own after Dora’s parents, Mimi’s son and daughter-in-law, are killed in a car accident. A lot of mystery shrouds the past, and Mimi won’t talk with Dora about her parents. In typical Dora fashion, she doesn’t push the issue, but she has a lot of questions that are left unanswered.
While Mimi is in the coma, Dora decides that she will run her vintage clothing shop. Dora spent much of her childhood there surrounded by the beautiful outfits of days gone by. However, Dora’s lack of enthusiasm for life extends to her wardrobe, and she is usually found in dumpy sweatshirts and jeans. But after rushing from campus to Mimi’s bedside, Dora left with the clothes on her back. This leaves the extensive closet full of outfits, coordinated from top to bottom, that Mimi’s been saving for Dora as her only source of clothing to wear. The clothing becomes important in Dora’s journey.
While waiting on her first buying customer, Dora discovers that some of the dresses in the store have a “secret life.” The secret lives are intensely personal, sometimes dark, and sometime happy snippets told from the point of view of the article of clothing.  This discovery shocks Dora. Mimi never told Dora she did this, and this is a side of Mimi that Dora didn’t know existed.
Mimi’s best friend, housemate, and childhood staple Gabby, along with part time store worker Maux help Dora on her journey to discover herself. Contractor Conrad provides a foil to Gary and aids in Dora reexamining what she wants out of life. A wicked aunt, clueless uncle, and ditzy cousin just may be what Dora needs to kick herself to stand up for what she wants.
This was a good book that could have been a lot better. I give it three out of five stars. It often felt as though Dora’s ennui was seeping out of the pages of the book, which made it difficult to read at times.
Review for ChicaWriter.com by Amy Byrne of Random Acts of Amy.
Amy is a mother, a lover, a crafter, Chihuahua momma, embroiderer of the weird, vegetarian, animal lover, techno savvy, scifi geek, and professional librarian. She rocks.