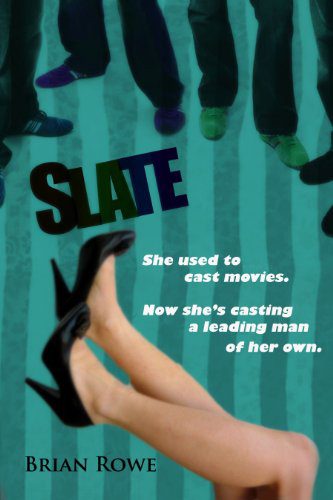 Review for ChicaWriter.com
by Sandra Lopez
Author of Esperanza: A Latina Story and Beyond the Gardens
Voted as one of 2011 Big Top Ten Latino Authors to watch
I just finished reading Slate by Brian Rowe. It begins with a prologue depicting a mountain hike of a character named Nathan LeMille. The scene was well-written and filled with vivid details.
When I first started reading this, it seemed that the main character would be Nathan, but then chapter one begins with a woman named Vivien Slate, a casting director for movies, starring in the primary role. It made me wonder what happened to Nathan.

Like any typical TV businessman, Vivien is hard-working and extremely busy—so busy, in fact, that she can’t be bothered to remember an intern’s name. She can’t stand people who are ignorant about the entertainment industry; in fact, she nearly clobbers a video store clerk because of her lack of movie knowledge. Vivien also has a son, a child actor she desperately pushes into the spot light of fame and fortune.

We actually don’t run into Nathan again until he accidentally bumps into Vivien on the way to exiting the office of her son’s acting coach.

As the story continues, we are introduced to other characters: Christopher Bells, the storyboard artist with the bowel syndrome and a longing aspiration for the acting life; Lila Perrington, a 50-something “B-level” actress who hates to admit her real age; Garrett Skyler, a former child actor that grew into a hunk that now ignites a fire in Vivien’s fantasies; Tyler Stiletto, a “show me the money” agent; Alyson Baumgartner, the film/acting student who is barely learning the non-California lingo of the industry; and, of course, Nathan LeMille (the guy we meet in the prologue,) another actor trying to get his face out there, even though the scar on his chin was his worst enemy. Every character—all of which come into the story with their own personal baggage—is somehow connected to Vivien, as she, herself, struggles to find balance in her career and family. But then Vivien’s world starts to crash and burn after she catches her husband sticking it to his young secretary in their Jacuzzi, to which, Vivien goes ballistic, grabs a bat, and chases after her cheating husband (a very entertaining scene!)

After that, Vivien can only think of one thing: to get back at her husband for what he did. One way—the only way, as it was bluntly stated—was for her to cheat on him. And that becomes her mission throughout the entire book. I liked how, in the beginning, Vivien was so clumsy about the whole getting-laid thing, especially in regards to the entire process—going to late-night bars, flirting, making eye-contact, going for the first kiss, etc. This gave her character a comedy quality, one straight out of a Sandra Bullock movie.

Eventually, Vivien decides that it would be easier to cast her perfect man; and a fake movie that everyone wants to audition for is born. But suddenly her mission for a one-night stand takes a different turn as Vivien’s true desire is to go to bed with one man for the rest of her life.

Full of humor and sensitivity, this story takes us on a fun roller coaster ride through Hollywood. It was interesting to learn the back story of the movie industry—the casting, the script readings, the editing, the behind-the-scenes look into the real office life. The author clearly knew a lot about movies and had a sense of humor about it. But I did feel that there were a few too many characters, so many that it took some of the focus away from Vivien. Was it really necessary to map out everybody’s life story in so much detail? However, despite the fact that there were too many people, the writer does take us back to the story, clean and simple, without losing the reader’s interest. I must also add that the book had a bit too much sex for my taste. Not that there’s anything wrong with a little sex in a story, but, in retrospect, I do tend to get a little put off—not to mention disgusted—when it gets too racy. I basically had to skip those scenes.

In any sense, curiosity compels you to keep on reading as you wonder how it will all end. Will Vivien achieve what she set out to do? Will she feel any differently about it? How will it affect her and those around her? Will she be happy with herself when this is all over? You can’t help but feel sympathy for Vivien as she goes through a crumbling marriage; however, she also portrays a selfish side I didn’t quite care for when she uses her power as casting director to seduce potential actors. Maybe she deserved to be a little selfish, but not at the advantage of a poor, struggling actor—that’s not professional. Did she really think she could find true love this way?

Towards the end, Vivien becomes more naive, clueless, and temperamental, which all rendered her as a true-to-life character. I mean, I’ll bet there are a lot of people like her in Hollywood Land. Overall, this was a quick and easy read, even as an E-book (I personally prefer reading my stories from an actual book in my hand as opposed to a computer screen.) Still, I could not wait to see how it would end.