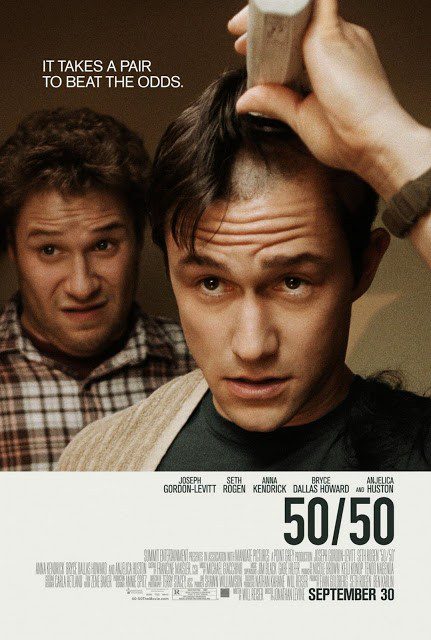 Official synopsis: Inspired by a true story, a comedy centered on a 27-year-old guy who learns of his cancer diagnosis, and his subsequent struggle to beat the disease.

Why I was excited to see this film: Bottom line? Joseph Gordon-Levitt. Ever since I interviewed him in 2007 for The Arizona Republic in 2007, I’ve been smitten by his personality and career choices. So much heart! Plus, the movie is about his character’s struggle with cancer. I lost my dad to cancer two years ago and I felt like this film would be a sort of healing process for me.

Review: Go see this movie! Yes, it’s about a cancer victim and his struggle to overcome, but it is so much more than that. It’s sad in spots, but never depressing. It’s hilarious without being tacky. It’s a film about friendship, taking risks, letting go, owning up, and embracing the little moments in life.

Gordon-Levitt plays Adam, a happy-go-lucky, yet overly cautious twentysomething. Out of fear of being a roadside fatality statistic, Adam is so safe – he doesn’t drive, much less cross the street without the proper traffic signal. He kindly recycles, doesn’t drink or smoke, yet finds out he has a rare form of cancer. That news from his doctor triggers the plot, but the real memorable movement comes from the way his friends and family react and deal with his battle. Just like in real life, not everyone is on board, notably Adam’s self-centered girfriend Rachael (Bryce Dallas Howard in another love-to-hate-her part). 50/50 could easily have been cornified with sentimental cliches, but it never veers down that path.

Gordon-Levitt, channeling the adorable good guy essence of his (500) Days of Summer character, is the gem that makes the film sparkle. He fills the role so effortlessly, he’ll melt your soul because you just want to jump through the screen and be there for him. I predict this is his time to be noticed and respected as solid actor. Kudos to the rest of the cast  – Rogan as his smart ass BFF, Kendrick as his newbie therapist and Houston as his melodramatic worried mother. They each come together to make this flick a timeless heart tingler.

Five out of five stars!

If you want to see more of Joseph Gordon-Levitt, check out these films: Inception, 10 Things I Hate About You, Miracle at St. Anna, Angels in the Outfield, (500) Days of Summer.