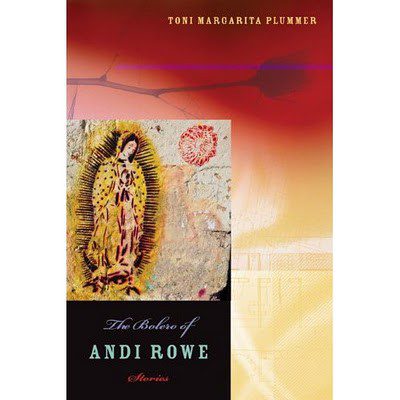 Today I’m excited to share an interview with a friend and fellow, author, Toni Margarita Plummer! We met years ago at a writing conference and have stayed in touch ever since. Please check out and buy her new fabulous book!
Tell us a bit about your book!
The Bolero of Andi Rowe is a short story collection, and my first book! The stories are inter-related, so you’ll see recurring characters throughout. A lot of them tell the story of this one family, the Rowe family. They’re mostly set in the San Gabriel Valley in Los Angeles. Most of the characters are Mexican-American and Catholic, so the stories tend to deal with those cultures. I’ve heard from readers that some parts make them laugh out loud, and that they find other parts very touching. It’s been really wonderful to hear readers’ responses!
Did the idea come first, or the goal to write a book?
I think they happened about the same time. I wanted to have a published book, and I had a rough idea of what I wanted that book to be about. I didn’t have much of a plot. I just had this desire to capture characters and place.  It started out as a novel. Then I ditched that idea and put together a collection. It was even later that I realized the stories should be inter-related, independent but in communication with each other.
Outline or no outline?
I never had an outline for this book. I don’t think one was necessary. The best moments writing it were when a story veered off in a new direction, when I realized that it was really about something else. These were short stories though. At the moment, I’m in the process of plotting out a novel. A novel seems so long! I’m hoping that if I can roughly sketch it out, it won’t seem so daunting.
By day you are a book editor. How did it feel to be on the other side of the page? Did being an editor help speed up the process?
It was funny–while the experience felt utterly new, it also felt very familiar. I think being an editor meant I was coming in being more aware of the process.  I knew there would be a copyedited manuscript, first pass pages, catalog copy, jacket copy–I knew the basic schedule for what it takes to make a book. I also had an idea of what the publisher would be handling and what I’d have to take upon myself. There are differences across publishers, of course, so I did end up making some assumptions based on my own experiences. There were surprises, but I think the process did run more smoothly than it would have if I were coming in a complete newbie. It’s still very different when it’s your own book being published, but it definitely did help just having been through it all as an editor with so many debut authors.
What were a couple of your challenges with writing the book?
I kept wanting to rewrite the stories! This drove my family and friends crazy, and me too, quite honestly.  I would talk about how I needed to do more work on the stories and my family would say, uh, haven’t you worked on these enough already? Aren’t you done yet? But I couldn’t let them go until I was satisfied that they were ready.
How would you describe your main character? What is the overall message you want readers to take away?
If there is a main character in the book, that would be Andi Rowe. Even though she’s not the main character in every story, or even present in every story, she’s sort of the focal point and the other characters and stories branch out from her. She’s a college student, figuring out her life–what is her relationship to her hometown after moving away, her relationships to her friends, family, etc.
I wasn’t really trying to give any kind of message. I was writing around my interests, which have to do with relationships, faith, and heritage, to name a few. I wanted to create stories around these and pose questions, more than give any exact message. What I hope readers will take away is a feeling of intimacy with these characters and with this world.
Will the experience change how you edit books?
I don’t think that it will, actually. Each manuscript and author has different needs and I only figure that out as I’m reading something.
What is your story of how you got your book published?

I saw an announcement for the Miguel Mármol Prize, which Curbstone Press gave out for a first work of fiction by a Latino author. The winner got a contract and a small advance. I had several stories, enough to make the page count. And I thought, I have a good shot at this! So I brushed them up and sent them in. Roberto Márquez was the judge and he picked my collection as the winner. Curbstone was going through some internal changes though, and they found they couldn’t go ahead with publishing the books they’d acquired. So my book was stalled. Eventually, Curbstone was acquired by Northwestern University Press, which added them as a new imprint, Curbstone Books. My book was the inaugural book in the imprint. And that’s it! It only took, hm, I think about 8 years! That’s from when I first started working on the material to publication. I think I needed all that time though. My perspective on these stories has changed over the years–I developed a better understanding of what I wanted to accomplish with this book and I’m very grateful to Curbstone and NUP for making it happen!

Here is a clip of Toni reading from her book!