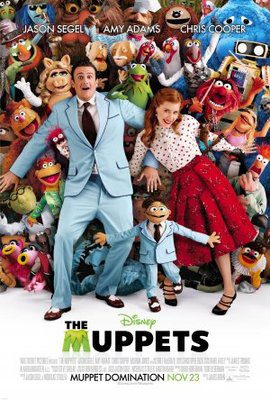 The Muppets
By Lola S. Rocco
Special for CraftyChica.com

Official synopsis: With the help of three fans, The Muppets must reunite to save their old theater from a greedy oil tycoon.

Why I was excited to see this film: I’ve been a huge Muppets fan for as long as I can remember. I’ve been counting down the days until this movie’s release. Nothing can put a smile on my face more quickly than Kermie and Piggy singing, “The Rainbow Connection.” Not to mention, I LOVE Jason Segel and had a really good feeling that he’d do justice to the latest installment The Muppets’ movie franchise.

Review: Everything is perfect. Everything is grand about The Muppets. In an age when CGI and 3D movies dominate the family film genre – think Alvin and The Chipmunks and The Smurfs – The Muppets remind us sometimes, simple and sweet can be much better.

Self-professed Muppets Nerd Jason Segel (Forgetting Sarah Marshall, How I Met Your Mother) – who stars in, produced and co-wrote the film – has successfully managed to reboot the franchise in a way that’s fresh, while maintaining the sweet spirit of Muppets creator Jim Henson’s original work. The script is funny, nostalgic, nonsensical, surreal and heartwarming all at the same time.

The Muppets follows Muppets-obsessed Walter, his big brother Gary (Segel) and Gary’s girlfriend Mary (Amy Adams) as they leave their idyllic hometown of Smalltown, USA to visit Hollywood and Walter’s dream vacation spot, the Muppets Studio. Walter may be a Muppet and Gary a man, but you never feel as though this seems weird or needs to be explained. Just like past Muppets movies, The Muppets is unabashedly absurd and makes no attempts to explain itself. Upon arrival, the trio find the Muppets Studio in ruins. While savoring a few moments in Kermit’s old office, Walter overhears oil tycoon Tex Richman’s (Chris Cooper) secret plans to raze the Muppets Studio – hallowed ground for a Muppets fan like Walter – and drill for oil. When Walter hears that the Muppets will need to cough up $10 million to save the studios, he hatches a plan to get the gang back together for one last charity TV show to raise the money.

Of course, getting the old gang back together turns into an adventure with lots of laughs and songs along the way. The ever-loveable Fozzie Bear is rescued from his gig as lead singer for a hard-edged Muppets coverband known as the Moopets, while Animal is bounced from his stint at an anger-management rehab. And then of course there’s the lovely Miss Piggy, who’s now the editor of French Vogue (complete with an uppity assistant played by Emily Blunt, a brilliant cameo by the Devil Wears Prada Star). Yes, it’s true, the Muppets were meta before being “meta” was a thing.

Once they’re reunited at the theater, The Muppets gang work together and, of course, break into super catchy songs (Flight of the Conchords’ Bret McKenzie co-wrote many of the songs and was a musical supervisor) as they get the dilapidated theater back into working form for their big comeback show. But the theater is the least of their problems. The gang must find an A-list celebrity emcee, which results in the hilarious kidnapping of a surprise celeb; Kermit and Miss Piggy are fighting; and Gary struggles between letting his little brother go off into the world and committing fully to Mary. Walter, meanwhile, is searching to find his own special talent among The Muppets that he’s looked up to and followed all his life. And we can’t forget about the deliciously evil Tex Richman, who tries everything he can to keep the show from succeeding.

But their biggest dilemma … will anyone show up? Will anyone still like, let alone remember, the Muppets at all? Kermit and the rest of the gang may have to wait until the end of the movie to find out, but the answer is much clearer for those in the movie theater seats. Right from the opening sequence of The Muppets, fans new and old will be thoroughly enchanted.

I haven’t stopped gushing about this movie since I saw it. And much to the dismay (I’m not exactly he best singer) of my friends and co-workers, I’ve been singing the songs from the movie non-stop. In an age when most movies, more specifically family movies are forgotten as soon as you leave the theater, The Muppets will add a skip to your step and keep you whistling a tune long after the credits roll.

Five out of five stars!

If you want to see more of The Muppets check out these classics: The Muppet Movie; The Great Muppet Caper and The Muppets Take Manhattan.

5 thoughts on “MOVIE REVIEW: The Muppets”