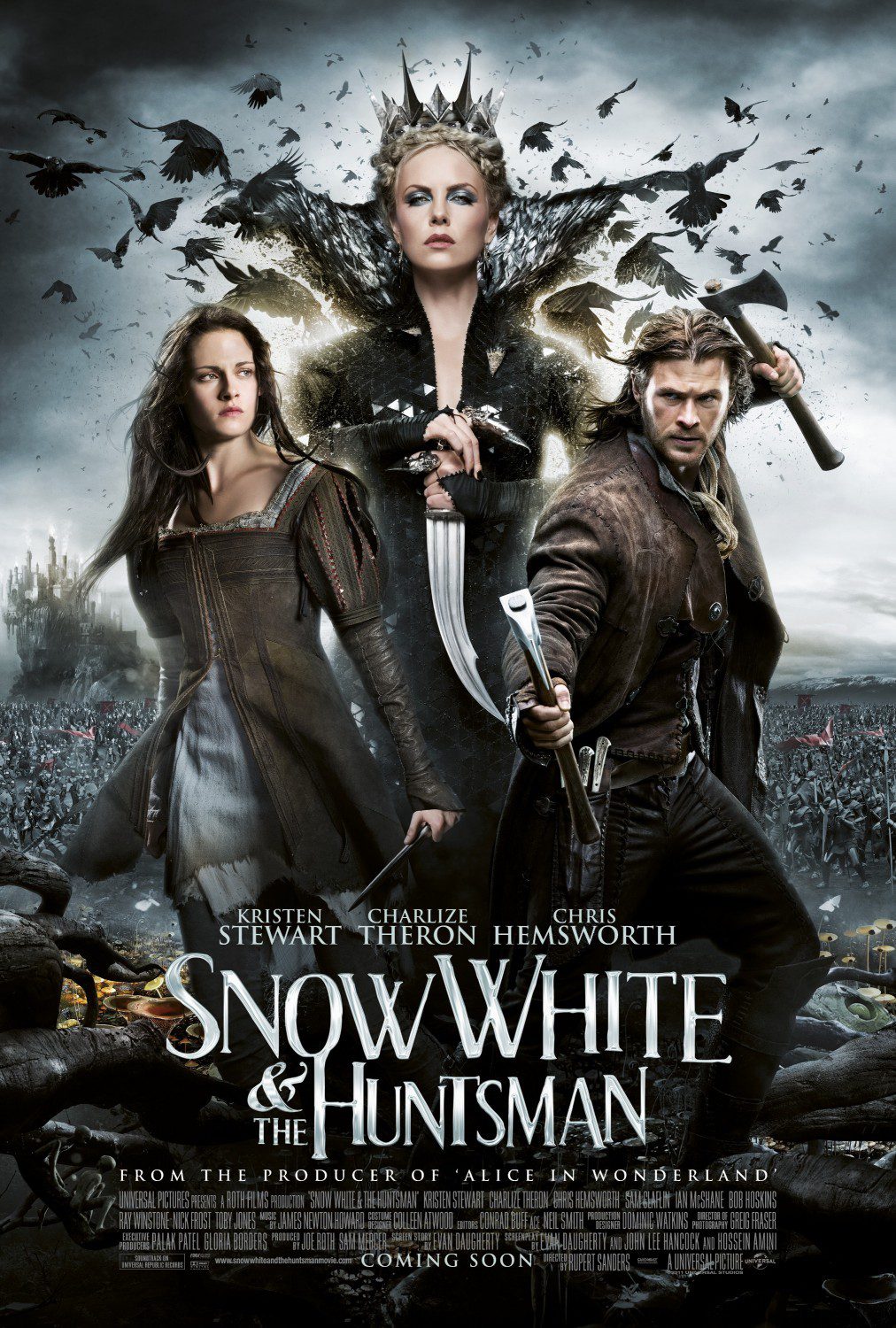 Snow White and the Huntsman
By Kathy Cano-Murillo

Official synopsis: In a twist to the fairy tale, the Huntsman ordered to take Snow White into the woods to be killed winds up becoming her protector and mentor in a quest to vanquish the Evil Queen.

Review: This film should have been titled, Snow White and The Evil Queen. Why? Because their conflict steals the show. Unfortunately, our loyal huntsman is simply a side fixture, certainly not title worthy. Not that I was married to the literal meaning, but I craved  expected little more in the ‘budding relationship’ department. That doesn’t mean I hated Snow White, but it could have been such a better flick if only for a few tweaks – as in – more Huntsman!

About Hemsworth, he gives his role color as a drunken, grieving widower who is forced to hunt Snow White and deliver her heart on a platter to the Her Majesty (aka Revenna). But the princess wins him over and together they trek off on a sword-wielding adventure. The two must stay ahead of the bad guys, while navigating their way through a variety of enchanted forests. Some dark, some magical. Their plan? Find Snow White’s deceased father’s army and convince them to go mano y mano against the queen and her undentable army.

Through this we see that the Huntsman is a broken lad – gruff and dejected, yet oh-so charming at the same time. Just as we start to feel a connection between them, Snow White’s handsome, sharp bow-shooting childhood friend enters the picture. Between him, the Huntsman and Revenna, we’re banking on a three-way throwdown for her corazon! The set up was perfect. I was sooo ready for fireworks!

What do we get is a strong female-driven story that pits power, treachery and vanity against kindness, love and beauty. Fans of fairy tales will enjoy the artfully crafted storybook elements such as the apple, the magic of true love’s kiss, faeries, dwarfs, phantom armies, and of course – the notorious mirror on the wall. Theron lives up to the wickedness required, and then some.

Snow White and the Huntsman has everything going for it, it’s dreamy, empowering, breathtaking, cute in moments, exciting, and visually stunning. But its flaws are what dulls the shine. Number One: It’s too long. Definitely hit the restroom before you get situated in the theatre. *Pause* Actually, you’ll be fine, because there are plenty of scenes that could have been edited down, so wait for one of those! Number Two: The final showdown that we waited the entire film to see, could have been dialed up a few notches. You’ll see what I mean!

My only other beef is that I wanted this movie to live up to its name- Snow White and The Huntsman!

Three and a half stars out of five.

Let me now how you liked the film, leave a comment!

What other fairytale would you like to see in live action?

See my craft project inspired by the film HERE.