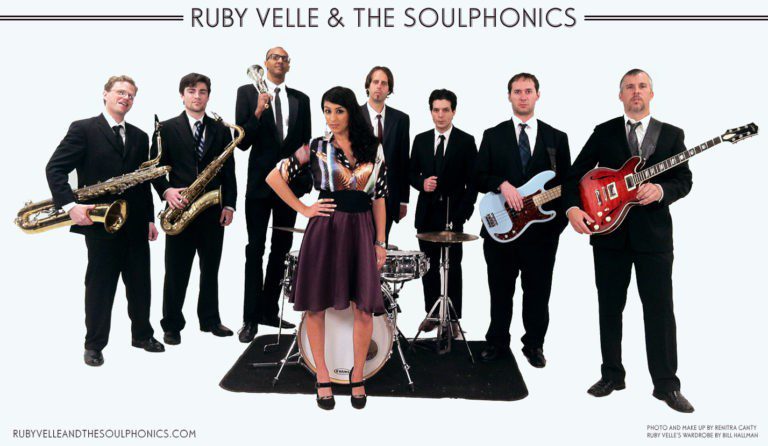 Conscious lyrics set to a funky groove? Yes. Count me in. I bought this on an iTunes recommendation, and lordy did it ever hit the right spot! I bought this album yesterday and I’ve already listened to it, oh about about 50 times, even as I went to sleep last night. It makes me feel like a teenager in the 1960s (before my time!), wanting to change the world. Ruby Velle’s voice revs up like engine on a mission and at times her heavy, raspy tone even evokes Amy Winehouse-eqsue tingles. But what really sets these songs apart are the lyrics. Deep, meaningful and inspirational! The songs move my soul in every way possible, I LOVE this album and hope they come through Phoenix on a future tour! I hope you’ll give them a listen and I hope you like them too!
Here is more about them:

Full album “It’s About Time” by Ruby Velle & The Soulphonics on the streets Sept 4, 2012…..
The first official video for the band was a labor of love from the bandmates themselves, as they took a week off from recording the debut album “It’s About Time,” to produce, film and direct the video for the single “My Dear,” completely DIY and on a limited budget. The video is nostalgically lo-fi yet classy, serving as a showcase of the band and was filmed right in their own studio in Little 5 Points Atlanta. The single “My Dear” shares a message for people to reach within themselves and “bring light to the dark,” so this interpretation can be seen throughout.