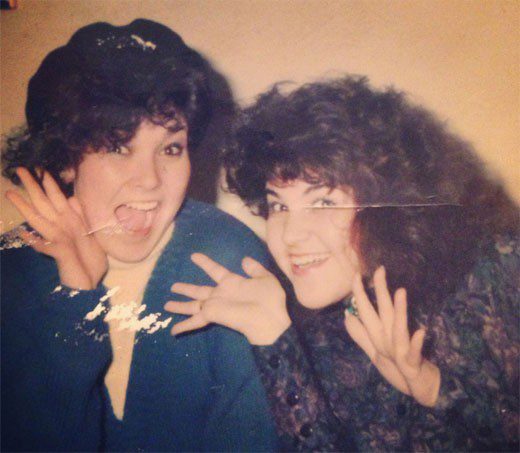 Rewind to 1984 or so. Here’s here’s a piropo I unintentionally threw at Patrick on our first date. At the end of the night, he dropped me off in front of my parents house. We had such a great time, I didn’t want it to end, so I thought I’d invite him inside to watch MTV.

We sat in the car and I asked, “Want to get down?”

He smiled and stroked his chin. “Now? Here?”

I laughed. “In my parents house!”

The next day while talking on the phone, the topic arose.

“Kathy,” he said. “When you asked me to get down last night, you meant go inside your parents house and stay up and talk and watch TV and stuff, right?”

“Uh, yahhh…duh! What else would I mean? *pause* I gasped. Oh. My. God. You thought I was asking you to KC & The Sunshine Band Get Down Tonight get down?”
“That’s what I thought at first,” he replied. “Be careful the way you words things with guys, they can take it the wrong way.”

Fast forward to four months later, we had broken up (mutual, thank you very much!). I happened to have a trip coming up with my cousin Stephanie to Europe for a month. It was the longest either of us would be away from our strict, traditional, loving Mexican-American parents. Outside I was smiling, single and happy. Inside, crushed, because I was crazy, secretly still in love with Patrick but didn’t want him to know.  The timing for this trip was perfect. I was going to use it as a way to purge Patrick out of my brain and heart. Nothing was out of the question, it was my time to be free. I was 21 and single and traveling the world!

All I can say is that Europeans serve up piropos the same as they do their coffee – strong, often and tang-ily bitter at the first taste. Especially Italy!

Swear to God, these stories are true. This scene took place in Venice while we decided to separate from our group to “explore.”
Me to Stephanie: “Wow, the weather is beautiful today!”
Random guy with a thick Italian accent: “Oh, you beautiful American girls! Let me show you our city. We’ll go make love under the trees and you’ll never forget us!”
Us: “No thanks!”
Another random guy: “Oh, lovely, beautiful girls, come with me. Let’s go make love!”
Another random guy steps in front of them: “You American girls want to make love, you say? Come with me!”
Yey, another random guy approaches as we dart away to catch up with our tour group.

OK, another “event” took place in Greece. We met these adorable lads from England. We partied on the beach and danced at this nightclub that was built on the side of a mountain, on a cliff. At the end of the night, my new friend offered to walk me home. We got to the hotel and me, being a total dork, asked him if he wanted to come inside my room. He was all, “SURE!”

We stepped inside. As he plopped on the bed, I excitedly reached for something to impress him. My spankin’ new multi-pack of Pental markers that I bought in Phoenix at the Price Club! I proceeded to show him my doodle art. I got to like, I don’t know, page 13, and he put his hand on top of the book to stop me.

“Are we going to have sex or what?” he asks bluntly in his thick British accent.

It took me a couple seconds to soak up his question. “What do you mean?” I asked, totally shocked.  Surely I must have misunderstood. He couldn’t have said what I though he said…

“I thought we were going to have sex, you invited me to your room,” he said as if I was utterly clueless, which I was.

Of course he assumed that.  I immediately remembered what happened with Patrick and the get down business.

“I’m sorry if I led you on, I didn’t mean to,” I explained. “I only wanted to be friends, you see, truth is…I’m in love with this guy back home, and well…

He cut me off again, he didn’t want to hear my sobby love story. “It’s cool, but I’m out, I’m exhausted after all that dancing anyway,” he said nonchalantly, as if he just passed on a boring dessert. He took a marker, jotted down his address across one of my pages in case I wanted to become penpals, kissed my cheek and left.

Side note: Right after that guy left, I called the traffic court where Patrick and I worked, knowing it was the afternoon in Phoenix. One of our co-workers picked up the phone. I asked for Patrick. I just waned to hear his voice so badly! “Kathy,” she said. “You’re in Greece and you’re calling Patrick at work, you still got a thing for him, don’t you? Hang on, I’ll go find him.”

Her words sunk in and I hung up the phone! I had to remind myself that I wanted to forget about Patrick once and for all!

Now we’re onto a year later. Patrick and I had become really close friends, not quite romantic, but I knew he was my soul mate. Still single, I decided to go on a date with this guy pictured above. This is an actual photo from the date, I met him after work at Acapulco Bay Beach Club, the hippest Latin dance club in town at the time. Sergio. He worked with me at the traffic court and had always asked me out so I thought, “Why not?”

All night he threw out the piropos, and I allowed myself to catch one.

“If I could rewrite the dictionary, I’d put U and I together!”

Kinda cute, right? We ate dinner, had a beer, danced a little, and then he asked me to walk outside with him to see his new Mazda Miata. We get to the car and he opens the passenger door for me. “Where are we going?” I asked.
This creepy look crawled up his face and he said, “Wanna get down?”
“Uh…like, KC and the Sunshine Band get down?,” I asked. I really needed clarification.
“If that’s what you want, sure!” he said.
“No, I was asking because if that’s what you were thinking, then the answer is no I don’t want to get down. Let’s just go back in the club and dance.”

We returned inside and would you believe he LEFT ME there? He said he had to use the restroom and I never saw him again that night. I never spoke to him at work either. JERK! But the silver lining was that I stayed because some of my girlfriends were there. Who arrives later in the night? Patrick and some of his friends. My beloved Patrick gave me a ride home. This is how it went for the next year or so always there to help each other, the first one we’d call for anything and everything. Best friends…until we finally got our act together and became an official couple. Next month we celebrate 23 years of marriage!

Patrick, for the record, never really used any piropos and/or pick-up lines. But wouldn’t you know tonight he threw out the sweetest one in history.

“He held my face  in his hand and looked into my eyes and said, “I love looking at your canas (grey hairs), it means we’re growing old together.”

So those are my silly piropos stories, hope I didn’t bore you.