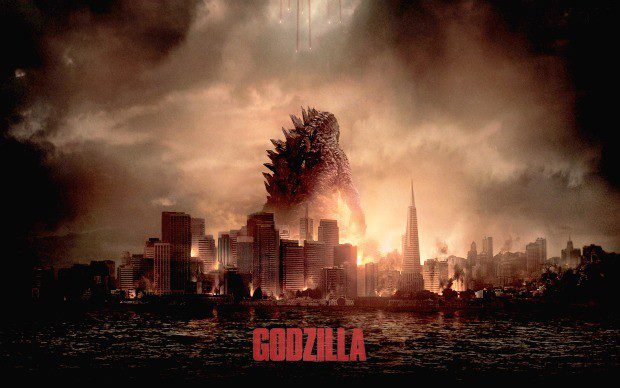 Based on the premise alone, this Godzilla reboot wouldn’t have been on my short list this week. But that trailer! Talk about chocked full of angst and mystery! Bring. It. On. But the movie did not live up to the trailer. The first misstep involved way too much build up at the beginning of the film. It reminded me of waiting forever in an amusement park ride line. A line that twists into different rooms, and you’re wondering, “When the heck are we going to get there?” Then you FINALLY go on the ride, and it’s exhilarating, but short. Being the patient person I am, I invested my energy in the first half of Godzilla, thinking it would all pay off. It didn’t. In fact, at 123 minutes, much of that front end could have been shortened to get to the meat of the story – the MONSTERS!

The plot is anchored with the Brody family. Mom and Dad (Cranston and Juliette Bincohe) endure a tragic event at their nuclear workplace in Japan, which ultimately comes into play again 15-years later in the lives of their son (Taylor-Johnson) and his wife (Olsen) and kid. The father-son relationship is put out there to draw us into the story, but it just didn’t go deep enough for me. There weren’t enough bonding moments, or convincing realization of lessons learned. In addition to the Brody family, there are also scientists, military authority figures, you know – all the usual suspects in stories like this. The problem is that every one of them shows mostly two expressions: disbelief and fear. And neither can be told apart. 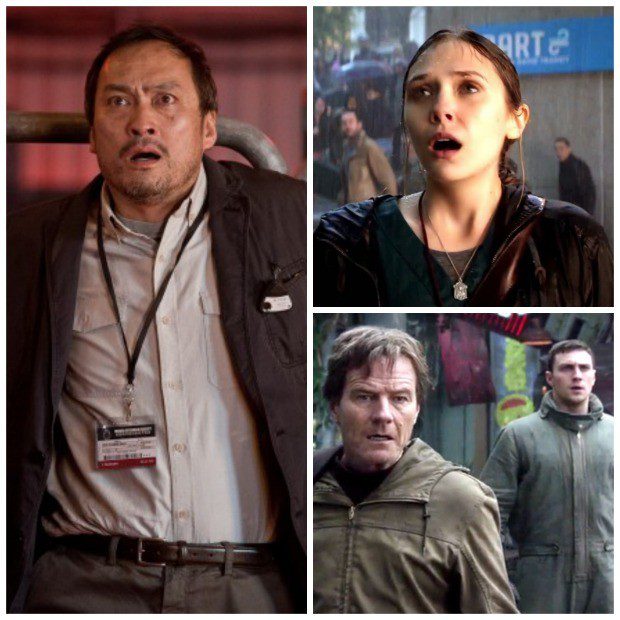 What Godzilla really lacked for me was 1. a sense of lightness and 2. nail-biting action. There were so many missed opportunities in both areas. A lot of fancy build-ups, but little pay-off. I think of other monster/alien sci-fi films (Cloverfield, Super-8, Independence Day, Starship Troopers) that had invasion subject matter, but still managed to weave in endearing backstory and dashes of comedy to keep us entertained until the climax.

Another annoying Godzilla gripe – too many elements to keep track of (in order to fill the plot holes). I overheard people in the audience ask things like, “Wait. What happened again? I’m confused, is the bomb good or bad?” And on the drive home, DeAngelo, me and Maya thought of a lot of ways certain pivotal scenes could have been punched up with either action or wit.

It’s all clear. Godzilla really isn’t about the characters, so who cares if they are one-dimensional? The only star needed to carry the film is, well, Godzilla! In all his CGI glory, the spiky-tailed Japanese import does succeed, with a hint of personality too. The down side is that I wished Mr. Man made his appearance much sooner. My favorite part of the flick was probably everyone else’s – the ultimate monster show down. It only lasts a few minutes, but at least it does deliver!

I peeked at the other reviews for Godzilla, and it appears I’m one of the few who didn’t stand up and clap at the end. Oh well! My tip is if you are willing to wait through the slow, dull build, you’ll at least have fun with the monster fighting scenes.

Get Crafty!
Check out this tutorial for a Godzilla vs. Mothra Applique by Needles Groove! There is a pattern and everything! LINK 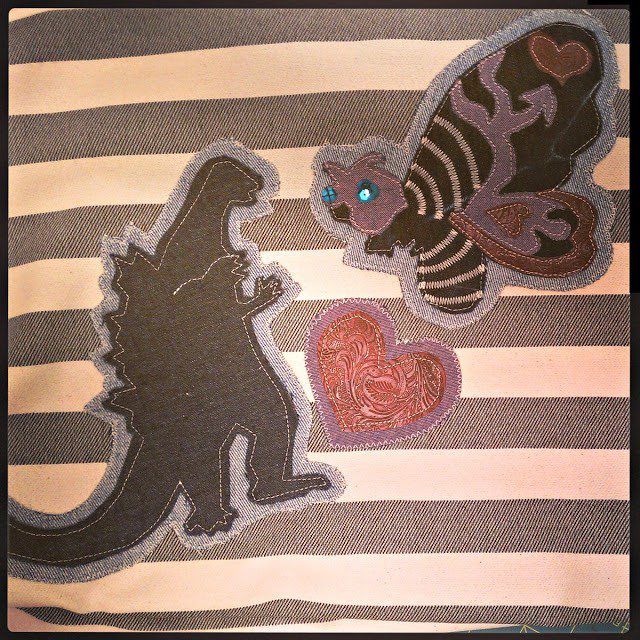