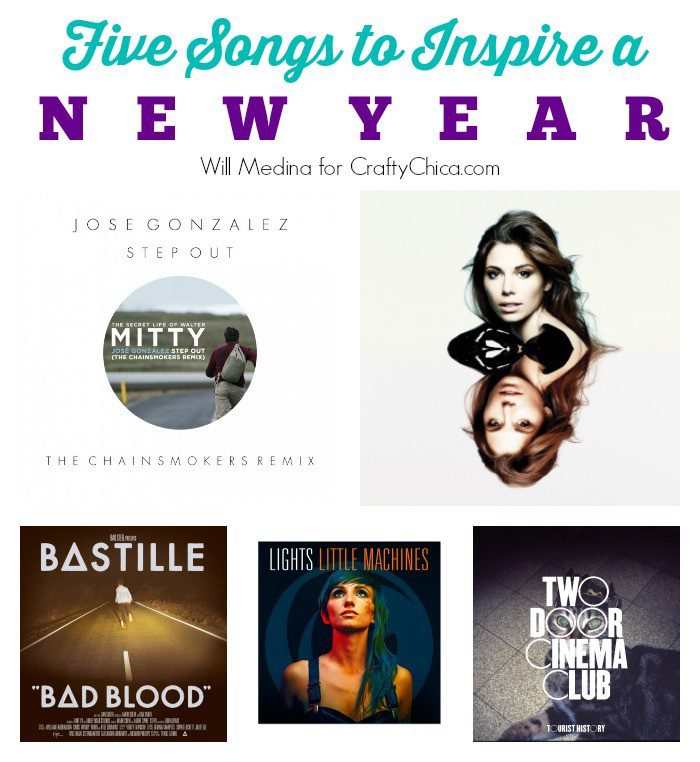 Happy New Year everyone! Who’s ready for great 2015? I know we all have some great resolutions this year that we definitely want to follow through on. One of my resolutions I have this year for myself is to go to more local shows and really support the music scene here in Phoenix. With that said, I really wanted to share with you some great songs that will definitely keep you inspired throughout this year. These top five songs are on my playlist every time I need a little pick me up in the creative department or just need a little push to make it through the day.

Coming in at #5 is “Step Out” by José González, this Argentinean indie folk singer-songwriter and guitarist is from Gothenburg, Sweden. José has become nationally renowned for his mix of indie pop and intimate acoustics that has helped propel him as a top artist in Sweden. I have to say when I first heard this remix version of this song I felt like I had been given an extra shot of energy and I really wanted to go out and do something. Whether it is the background music to a challenging project or just simple stroll down the street this song will give you the inspiration you need. I also highly recommend listening to his slower acoustic songs that are simply amazing and his voice is so soothing when you need to relax a bit.

Coming in at #4 is the ever inspiring Christina Perri with her up-tempo hit titled “burning gold” which really takes a different spin on her usually ballad inspired songs. This singer-songwriter and musician debut single, “Jar of Hearts” charted after it was featured on the Fox television show So You Think You Can Dance in 2010. Christina has taken off ever since and has not looked back. When I first heard this song I was inspired instantly with lyrics because it really gives you light and really sends the message of its okay to make a change in your life. I highly recommend checking out her most recent album titled head or heart which has some other great hits to add to your playlist.

This was a hard choice, but coming in at #3 is “Weight of Living, Pt. II” by Bastille. Ever since their huge hit “Pompeii,” this British rock band first was formed in London in 2010 and hasn’t stopped making hits since. When I first listened their album “Bad Blood,” this song particularly stood out to me because of its up-tempo chorus that really gets you moving and gives you that extra push you might need. I really recommend checking out the rest of the songs on “Bad Blood” because you wont be disappointed at all.

Coming in at a close #2 is “Up We Go” by Canadian artist Lights. This electro pop musician, singer, and songwriter has been winning over fans since 2008 and some of her notable singles include “Drive My Soul”, “Ice”, “Second Go”, “Toes.” I have been a fan of hers since probably 2009 when I high school and I have been following her career for quite some time now. When I first heard “Up We Go” which is the lead single off her newest album, which was released back in September I really was inspired with the not only the lyrics but how catchy this tune is. This track will definitely give you that energy you need to complete any project that you are working on. Also, I would really recommend checking out the rest of her music because you will be an instant fan in matter of time.

Can I get a drum roll please? Coming in at the top spot for my most inspiring song has to be “Something Good Can Work” by Two Door Cinema Club. First formed back in 2007, this Northern Irish indie rock band first hit it big back in 2010 with the release of “Tourist History” and has been quite since 2012. The first time I heard this song I was instantly inspired to get up and do something that day with the up-tempo contagious chorus. I highly recommend you check out the rest of their music and look out for their new album, which will be dropping some time later this year.

Well, I really hope you find some inspiration is each one of these amazing songs! Here’s to conquering 2015 with new inspirations throughout the year. I will see you next month with more new and exciting music for you to discover! 🙂

1 thought on “5 Songs to Inspire a New Season”